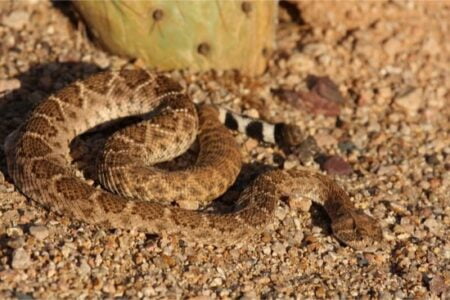 Snakes have adapted to harsh, inhospitable environments across the globe. You’ll find them in grasslands, rocky mountain habitats, deserts, rainforests, and the ocean. There are only a few places that snakes don’t live.

Snakes adapt to the desert by using light brown or grey camouflage to blend in with their surroundings. They’ve adapted to the temperature by learning to burrow in dens to shelter from hot temperatures. They also brumate (hibernate) during the harsh and cold winter months.

These snake adaptations to their environment enable them to live in the desert, but life is never easy. Populations are smaller than in less extreme environments, like forests. It’s a testament to their hardy nature that snakes can live in the hottest, harshest habitats on earth.

How Does a Snake Adapt to its Surroundings?

Snakes need to blend in with their environment. Because they don’t have limbs to defend themselves with, most snakes need patterns and colors (camouflage) that enable them to hide from predators.

Besides that, they also have to adapt to the temperature and humidity of their environment, as well as the prey that’s on offer. Let’s take a closer look at how snakes survive in the desert.

The first of many snake adaptations in the desert is to do with temperature. The extreme temperature variations of the desert put snakes and other animals that live there under enormous pressure.

It’s hot during the day, but it can be freezing cold at night. Moreover, while it’s as hot as hot can be during summer, winters are quite bitter. This necessitates behavioral changes in desert snakes.

Rattlesnakes are an excellent example. During the hot summer months, they become more active at night and less active during the day. Because they can’t regulate their body heat, the temperature is life-threatening.

In the spring and fall, when temperatures are more reasonable, they’re especially active during the day and seem to sleep at night instead.

Then, when winter rolls around, desert rattlesnakes brumate for the winter. They have dens called hibernacula, which are naturally occurring holes or gaps in stone.

Depending on the size of the hole, sometimes dozens of rattlesnakes can share the den at once. They use these dens to escape the intense desert sun when it’s too hot, and avoid freezing temperatures when it’s too cold.

Desert snakes have to get used to the limited prey on offer around them. They do so by eating a broad diet.

Mojave rattlesnakes mostly eat small lizards and rodents which are surprisingly common in the desert. They will eat the following:

These kinds of prey aren’t unique to deserts. Mountain regions, grasslands, and forest regions all contain rats, eggs and other snakes, for a start.

Their carrion-eating behavior is an example of how being in the desert forces snakes to adapt their diet, though.

Most snakes have camouflage. Take the western diamondback rattlesnake, the snake that’s responsible for the most fatal snake bites in the U.S. This snake lives in the south-west, from Texas to California, and down south to Mexico too.

They’re a dusty gray and brown color, with white, black or brown blotches all along their body. When they lie in the dry grass or on the forest floor of their natural habitat, they’re hard to spot.

They need to be camouflaged so that nobody can see them. The less visible they are, the more difficult it is for predators like birds of prey to find them.

Not only that, but rattlesnakes practice ambush hunting. This means that they lie in wait for prey to come to them. The harder they are to see, the more likely that prey will come close enough for them to strike.

The sidewinder rattlesnake has adapted its color and pattern to the desert. It’s a dusty, dusky grey and cream color. It has light brown patches along its body, and its underside is white.

Its color and pattern help it blend into their desert habitat, which is dark and sandy. To camouflage themselves further, they even burrow under the sand to lie in wait for their favorite prey, lizards.

Adaptations to Humidity (Lack of Rain)

One of the things that everybody knows about deserts is the lack of rain. Fortunately, rattlesnakes—in fact, almost all snakes—have developed adaptations that allow them to survive with very little water. It’s all down to how they conserve and use it.

When we go to the toilet, we get rid of lots of water. Snakes, by contrast, are much more efficient with the fluids they eat and drink.

They don’t excrete urine in the same way that humans do. When they do, they get rid of a tiny amount each time. Instead, they keep the water in their system to use when they need it.

Because they’re so efficient with water, snakes rarely drink. It’s unclear how and why they drink so little, especially because they don’t get a net gain of fluid from eating.

According to the Journal of Experimental Biology, snakes drink more after they eat rather than before, suggesting that they experience a net loss of fluid as a result of eating prey. This indicates that people who think they get most of their water from prey might be wrong.

So, where do they find water? Well, sometimes it does rain in the desert. When it does, they’ll take advantage by quickly drinking some of the collected raindrops.

Snakes don’t like to drink from still water or streams. They prefer to drink small raindrops, which are fresher and cleaner. They’ll also drink the morning dew if there is any.

According to The Southwestern Naturalist, some desert snakes have even learned to flatten their bodies to collect rainwater and then drink that.

Snakes That Camouflage in The Desert

Some snakes live exclusively in the desert. Others can live in a range of environments, from rocky plains high above sea level to grasslands and deserts, and everywhere in between.

The sidewinder rattlesnake is named due to the way it moves. Sidewinding is a unique method of movement, exclusive to just a few species of snake. It’s an adaptation to their environment that scientists are only just beginning to understand.

Sidewinding is a little like galloping, in a way. The snake bops up and down, bouncing a little off the ground, when they reach top speeds.

Essentially, the head thrusts forward and ‘grabs’ onto the ground. The tail then moves up behind, with the rest of the body held in a loop behind the head. The snake then straightens out the coil by moving their head outwards, almost like the striking mechanism.

Why do sidewinder rattlesnakes move the way that they do? It helps them move despite the very loose surface of the sand. But even more importantly, it stops them from overheating.

Because only two points of the snake are in contact with the ground, they don’t absorb as much heat from the scorching desert sand.

The gopher snake is California’s most common snake. You can find them everywhere aside from the high mountainous regions in the Sierra Nevada.

To keep out of the summer sun, they hide in pre-made rodent burrows or under rocks, logs, or anything else they can find.

Their pattern helps them blend in anywhere, as it’s a mix of browns, whites, blacks, and creams. Here some fun facts about the gopher snake.

Glossy snakes look a lot like gopher snakes, although they’re shinier and their colors are a little more faded. To deal with the heat of the Mojave Desert, they’ve become primarily nocturnal.

They’re mostly inactive during the day, and spend their time hidden in rocky outcrops where they can get some shade.

If possible, they like to burrow in the loose sandy soil to cool down too. They’re happy eating all sorts of desert lizards like iguanas and zebra-tailed lizards, meaning that they’re right at home, even in an arid desert.