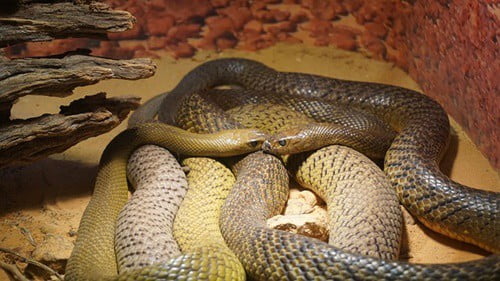 Snakes usually prefer to live alone, but they still need to ‘talk’ to each other in their own unique way. Males and females must mate to continue the species, share territories together, and ward off threats with their body language. So, snakes communicate with other snakes out of necessity.

Snakes largely communicate using pheromones, which are chemical signals given off through their glands and picked up by the vomeronasal organ. They provide other snakes with key information, such as the snake’s age, sex, and if she’s ready to mate. Snakes can also communicate using bodily touch, physical combat, and visual displays. For example, tail rattling to scare off potential predators.

We’ll look at why snakes need to communicate with one another, and how it happens in the wild. You’ll also find out how snakes interact with predators and humans, and whether snakes can hear other snakes’ hisses.

How Snakes Communicate with Each Other

Regardless of whether a species of animal is social or solitary, they all need to communicate with others from time to time.

Snakes do not use visual or sound signals to communicate with other snakes. Instead, they use strong pheromones.

Of course, snakes use different methods to communicate their ‘message’ when trying to defend themselves, such as hissing and musking.

Can Snakes Hear Other Snakes Hiss?

Almost all snakes can make a hissing noise by forcing air out of their glottis (the end of the trachea). However, research suggests that snakes cannot hear each others’ hissing sounds.

Snakes have inner ears and can hear certain noises, but they specialize in picking up ground-borne vibrations. This enables them to identify when potential predators are approaching. While they can hear some airborne sounds, they can’t hear them very clearly.

Snakes are adapted to hear only low-pitched sounds. Most snakes hear sounds in the range of 80 to 600 Hz most clearly, although some species can hear sounds up to 1,000 Hz. The frequency of the average snake hiss is well above 2,500 Hz, which is outside a snake’s hearing range.

The exception ‘may’ be the king cobra (Ophiophagus hannah), whose hisses are so low-pitched that they overlap with snakes’ hearing range, and sound more like growls.

Male king cobras have been observed to “growl” at one another during combat, suggesting that they may be able to hear each other.

Pheromones are chemicals secreted through the skin. Snakes deposit them on the ground, although some have also been found to be airborne, according to research published in Biology Letters.

The pheromones are species-specific. For example, a rattlesnake won’t respond to pheromones left by a garter snake.

The chemical makeup of the pheromones changes as the snake ages, and becomes sexually mature. When a snake detects pheromones from another snake, it will instantly know if the other snake is male or female, and whether it is ready to mate.

If a male snake picks up on a pheromone trail left by a sexually receptive female, he will follow this trail until he finds her.

How Do Snakes Detect Pheromones?

According to Frontiers in Endocrinology, male snakes without a vomeronasal system are unable to detect or respond to pheromones.

It is located inside the snake’s head, somewhere between its eyes and nostrils. But snakes don’t “sniff out” pheromones using their nose. Instead, they use their forked tongue.

Snakes stick out their tongues and “flick” them in the air, to catch odor particles, including any pheromones deposited by other snakes.

These particles are mixed with fluids in the mouth, and then pass through special ducts to the vomeronasal organ. The organ then interprets these odors and sends signals to the brain.

Once a male snake has followed the pheromone trail of a female, he must communicate his wish to mate with her. Scientists haven’t discovered how this method of communication works, but it varies between species.

Some male snakes will bump their bodies against the female. The male may touch his chin on the back of the female’s head or crawl on top of her body.

In some species, such as European and Asian rat snakes, the male may even gently bite the female’s neck.

There aren’t many circumstances when a male snake would need to interact with another male directly. However, they may come into contact if two male snakes want to mate with the same female.

To compete for a female, two male snakes fight. They lift their front halves off of the ground and “wrestle,” wrapping their bodies around each other and trying to bring the other one down. Eventually, the weaker snake will be driven away, leaving the stronger male to mate with the female.

Sometimes, male snakes fight even when there are no females around. This sort of fight usually revolves around territory rights. The unsuccessful male is forced to leave, and the victorious snake wins the right to hunt prey in the area, and mate with whichever females wander into the territory.

Not all species of snake engage in male-male combat behavior. Garter snakes, for example, clamor over the female in one large “mating ball.” Some males may even release female snake pheromones, according to Reed College. This fools other males into trying to mate with them, distracting them from the true female.

How Do Snakes Communicate with Animals?

Snakes have evolved various defense mechanisms to ward off threats. These include the following:

Predators are often intimidated by these highly communicative defensive displays and will leave the snake alone.

Wild snakes treat humans as predators. If a snake can’t avoid detection or escape when scared, it will use defensive techniques to scare us away.

A snake will ‘communicate’ its hostility towards a human via hissing, biting, and aggressive body language. It just happens more in the wild than it does with captive-bred snakes where more trust has been established.

Snakes communicate in order to breed, control territory, and scare off dangerous predators. Snakes have limited communication skills, but the methods that they use are highly effective.

MLA Style: Carter, Lou. “How Do Snakes Communicate (with Other Snakes and Animals)?” Snakes For Pets, (January 28, 2020), https://www.snakesforpets.com/how-do-snakes-communicate/.