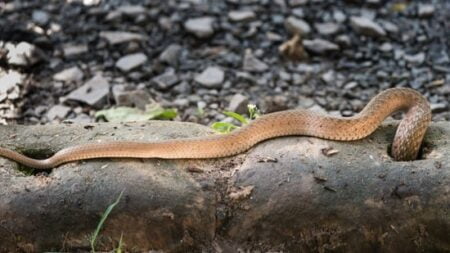 Snakes love to burrow underground. Having a hole underground not only offers the snake a cool, dark place for shelter, but it also helps a snake to hide from predators, as well as being able to catch unsuspecting prey. However, a snake’s body doesn’t make it ideal for digging its own holes.

While snakes burrow in holes, they are more likely to use a hole made by another animal rather than digging a tunnel itself. Snakes can only build burrows in very soft or sandy soil. So, a snake will usually use a hole that’s been created by another animal and eat the inhabitants, or will find an abandoned hole and repurpose it for itself.

While other animals make the holes, snakes will leave signs if they are using that hole as a den. We’ll now cover how snakes can dig holes themselves and how to spot the signs of snake holes.

The design of a snake’s body means that most lack the ability to dig holes. One of the most accomplished burrowers is the hognose snake. They are fossorial snakes, which means adapted to digging, so they’re able to burrow with their upturned snouts. Most other snakes lack this physical attribute.

While a rodent can scratch and dig with its paws, a snake only has its snout. This means a snake can push its way through soft materials such as through leaves, sand, soil, and mud. However, in hard soil, a snake cannot dig or excavate. Instead, it’s more that they bury themselves in what they can, rather than carving out a structured hole.

Rather than a snake trying to dig a hole underground, it is much easier for it to utilize a hole that another animal has created. Animals, such as rodents, who create elaborate burrows with lots of holes and exits, make it easy for a snake to find shelter.

What’s more, if the creator is still living in the burrow, then the snake also finds a meal. However, some snakes will only use a hole or tunnel when certain that it’s empty.

For captive snakes, it can be alarming to look into a terrarium and find your snake missing. However, it is more likely that your snake has buried itself under the bedding. This may mean that it is looking for a place to conceal itself if the hides in the tank are not sufficiently big enough.

Why Do Snakes Dig Holes in Ground?

Besides being easy for a snake to slither into, a snake hole offers a multitude of benefits. These include:

In adverse weather conditions, a hole will protect the snake from the elements. After basking in the sun, a snake may need to cool off.

Furthermore, a hole provides a welcome escape from any predators, such as birds of prey. Snakes can feel very exposed and will rarely move about freely in the open for fear of being spotted overhead by a potential predator. Snakes typically like to stay out of sight.

By lying in wait in a hole, another animal may see the hole and wish to use it for itself. This means that the snake doesn’t have to go anywhere for its next meal; the prey comes to them as a natural food delivery service.

When snakes need to keep themselves warm during cold weather, they will need to find a sheltered spot for brumation.

For some snake species, such as black rat snakes and timber rattlesnakes, they will head to the holes of their former den. Others will just find a hole that is free from frost. Sometimes a snake will head slightly deeper underground to stay warm.

With the right position, a snake can be poised to jump out of the hole as soon as any prey moves past the hole. The prey will be unsuspecting as it journeys across the opening, making it a complete surprise when a snake seizes its chance for a meal.

Furthermore, snakes will burrow into holes that have similar coloring, so they blend into the environment more easily. This also helps to protect the snake from being detected by a predator.

When a snake is sufficiently fed, it does not need to go out hunting and instead can rest and digest its food. A hole is the perfect rest stop, helping the snake feel safe, secure, and comfortable until it is ready to go out again.

Similarly, a snake hole can be a safe place to give birth or lay eggs. This not only helps to protect a snake when it is vulnerable, but also gives young snakes the best chances of survival by having a safe place to start life.

Which Animal Holes Are Best for Snakes?

Snakes ideally like holes that are big enough for their body, but are still snug. Typically snakes like holes where their back can touch the ceiling of the space, to help them feel safe from attack.

Different types of snake prefer different holes and burrows. For example, brown snakes like to blend in with bark and leaves, which black rat snakes live in the holes on trees, high above the ground. However, more often than not, a snake will utilize any hole that it can find.

How to Identify Snake Holes

The best way to identify a snake hole is to actually see a snake using or being near to a hole. Other indicators include the entrance to a hole being relatively clean. If a snake is using the hole, there would be no leaves or debris. There would also be a lack of spider webs near the entrance.

The snake hole will be relatively narrow and small. This is so the snake can be secure. If the hole is big, then it is likely that a snake wouldn’t occupy it.

Unless in brumation, the snake hole is likely only to be a few inches deep. Snakes do not want to use holes that are too far from their food source, as this will make it harder for them to hunt.

Remember, just because a hole is free from debris does not mean it is categorically a snake hole. There are lots of other animals that burrow and ensure that entrances are clean and tidy.

Never put your hand inside a hole as you may suffer a bite. Similarly, it is important to keep household pets away from the hole, too. If you are concerned about snakes on your property, it is advisable to call animal control who can help to remove snakes from your yard safely.