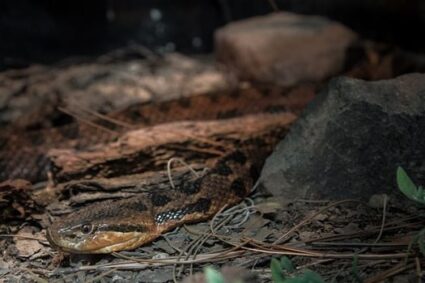 Snakes poop and pee using an organ called the cloaca. This is an opening at the end of the digestive tract, just above the tail. It’s also used for mating and laying eggs. Snakes poop approximately once every 1-4 meals, and pee slightly more often. Snake pee can be liquid, but is usually expelled in solid white lumps called urates.

The frequency and consistency of your snake’s excrement will depend on what and how often it eats. It can also vary by species and age. If your snake hasn’t pooped in more than 8 weeks, it could be constipated.

How Do Snakes Poop?

Though snakes swallow their prey whole, they can’t digest it all. Fibrous and indigestible materials are expelled as feces, usually after each meal.

The digestive system of a snake works in a similar way to our own. Once it has swallowed its prey, food travels down the esophagus into the stomach. There, it is broken down by stomach acid and enzymes, and passes into the small intestine.

The small intestine’s job is to extract as many nutrients as possible, such as fat, protein, and vitamins. These nutrients are absorbed through the intestinal walls into the bloodstream.

Afterwards, what’s left over is waste. All the indigestible materials such as fur, claws, and fibers are no longer needed. They pass into the colon, where most of the remaining water is extracted.

The snake’s feces then pass into a specialist organ called the cloaca. There, it’s mixed with waste from the renal system (urine and urates), and eventually expelled.

Where Does Snake Poop Come Out?

There are 3 parts to the cloaca: the coprodeum, urodeum, and proctodeum. The coprodeum is where feces gather from the colon. The urodeum collects urine and is also used for reproduction. The proctodeum is the final cavity, where urinary and fecal matter merges before being expelled.

Snake poop comes out of the cloacal opening, called the vent. This vent looks like a large scale, and is located on the snake’s belly, just above the tail. It’s also the opening that snakes use for peeing, laying eggs, and mating.

In male snakes, the hemipenes (sex organs) are stored inverted inside the cloaca. The female sex organs are also accessed through the vent. According to the Thai Journal of Veterinary Medicine, snakes have no uterus: the oviducts open directly into the cloaca.

How Often Do Snakes Poop?

Snakes eat large, infrequent meals rather than small, regular ones. As a result, snakes poop infrequently.

Most snakes will poop once every 1-4 weeks. The more often they eat a meal, the more frequently they’ll poop. Younger snakes (under a year old) will defecate more often than adult snakes.

The rate at which your snake poops will also depend on its species. Fast-moving, arboreal, and light-bodied snakes defecate more often than heavy-bodied, slow-moving snakes.

For example, corn snakes usually poop after each meal, sometimes multiple times between feedings. But it’s not uncommon for a ball python to poop once per 3-4 meals, or once per shed.

According to the University of Florida, heavy-bodied snakes deliberately retain feces to help them hunt. Slow-moving terrestrial snakes use their fecal mass as a ballast to stabilize their body.

This helps them to capture and handle their prey. On the other hand, fast-moving and arboreal (tree-climbing) snakes void their feces regularly, to aid mobility.

No matter what species your snake is, it may poop more or less often at certain times. If it’s eaten a particularly large meal, it will take longer to digest, and longer to poop.

If your snake is gravid (pregnant), going into shed or brumation, it may also poop less frequently. The digestive system runs more slowly in these circumstances, in favor of other bodily functions.

Healthy snake feces is solid and dark brown. It comes out oblong (log-shaped) and lumpy. If your snake is well-hydrated, its poop will have a slimy outer coating. It’s moist when fresh, but will eventually dry out to a hard lump.

The size of the stool will depend on the size of your snake, and how big its last meal was. Burmese pythons and other large snakes can excrete feces comparable in size to dog droppings.

You may also notice some white or yellowish streaks or lumps in your snake’s poop. These are urates, which are pieces of solid urine made from congealed ureic acid.

Snake poop is often soft, but it should not be runny or liquid. If your snake has diarrhea, this is a sign that it’s sick. It may have a bacterial infection or intestinal parasites.

Snakes swallow their prey whole. Everything including the animal’s bones, organs, claws, and fur passes through the snake’s digestive system.

But you won’t usually find bones in your snake’s feces, because snakes can fully digest their prey’s skeleton.

Snakes have strong stomach acid, with a pH level of 1.5 according to the Journal of Experimental Biology. This acidity, along with digestive enzymes, allows a snake to dissolve bones.

The prey remains in the snake’s gut for days or weeks, so that it can be digested fully. Bones provide a source of calcium, which is essential for a snake’s health.

However, snakes can’t digest fur, nails, or feathers. These are made from keratin, which is insoluble and can’t be broken down by acid or enzymes. So, if you were to dissect your snake’s poop, you may find hair or claws.

Snake poop smells similar to the feces of any other carnivorous animal. But certain species of snakes have smellier poop than others.

Colubrid snakes are widely regarded as having the most malodorous poop of all serpents. Examples of colubrids include hognose snakes, corn snakes, milk snakes, garter snakes, and gopher snakes. On the other hand, pythons and boas have milder-smelling poop. There are also several factors which can make your snake’s poop smell worse:

Your snake’s feces will also smell stronger the longer it’s left to fester in the vivarium. To prevent the buildup of odor, remove the feces as soon as possible and regularly clean your snake’s enclosure.

Where Do Snakes Pee From?

As well as pooping, snakes also pee. But a snake’s urinary system is not the same as a mammal’s. The 2 most significant differences are:

The function of the urinary system is to clean the blood. The kidneys filter the blood and get rid of waste substances such as urea. The waste then travels down tubes called ureters.

The waste then gathers in part of the cloaca called the urodeum. Then, it passes into the proctodeum and is eventually expelled through the cloacal vent.

Snake pee takes a long time to form, because snakes’ bodies hold onto as much water as possible. This is an evolutionary mechanism designed to prevent dehydration. The more water a snake’s body can retain, the less they need to drink. This comes in handy when there isn’t a water source around.

As a result, snake urine is highly concentrated and usually solid. The lumps of solid urine that you’ll see in your snake’s tank are called urates. But liquid urine can be released at the same time.

How Often Do Snakes Pee?

Snakes typically pee more often than they poop. It’s normal for snakes to excrete urates anywhere from several times a week to once every 6 weeks. They may expel liquid urine along with the urates, too.

Again, fast-moving and arboreal snakes urinate more often than slow-moving snakes. And snakes that are from arid areas of the world will pee less frequently than snakes from wetter regions. This is because they will try to hold on to as much water as possible.

All snakes are different, and you may find that two snakes of the same species will pee at different rates. If your snake seems healthy, is eating and shedding regularly and gaining weight, their peeing schedule is nothing to worry about.

Snake urates look similar to poop, but rather than being brown, they are white or yellow. Your snake may expel one large lump of urates, or several small pieces.

When they come out of the cloaca, urates are solid but soft. They are similar in texture to toothpaste. If your snake is well hydrated, the urates may have a slimy or wet appearance. But as the urates sit in the vivarium, they dry out to a crumbly or chalky texture.

Most snakes expel some urates when they poop. So, you may see some white urates mixed in with brown feces. This is completely normal.

As well as solid urates, snakes can also expel liquid urine. This is more common in captive snakes than wild ones. Because pet snakes have constant access to water, their bodies don’t need to hold on to liquids.

Liquid snake pee is similar to any other animal’s urine. It ranges from clear to light yellow in color. Usually, it gets soaked up by the bedding (substrate) so you may not even notice it.

Most first-time snake owners are surprised at how strongly snake pee smells. Because it’s so highly concentrated, snake urine smells a lot stronger than human pee does.

The less water is present in pee, the more concentrated it is, and the more it smells. Being so concentrated that it turns solid, snake pee is quite pungent.

When it’s been left to sit in the vivarium for some time, snake pee may also start to smell fishy. This is because bacteria start to break down the uric acid into ammonia.

You might notice that your snake smells like urine occasionally. This can happen if your snake has been sitting in its own pee. Cleaning out the vivarium and giving your snake a bath will get rid of the smell.

Why Won’t My Snake Poop And Pee?

Snakes don’t pee and poop every day. Their digestive and excretive systems work a lot slower than those of other animals. So if your snake hasn’t pooped for a long time, there’s probably nothing to worry about.

Most snakes poop once after each meal they eat. Active snakes poop more often, while slow-moving snakes like ball pythons take longer. But it’s not uncommon for a snake to go up to 2 months without pooping.

If your snake hasn’t pooped in more than 2 months, it may be constipated. Other signs of constipation in snakes include:

You can try to relieve your snake’s constipation by giving it a bath in warm filtered water (with no soap). Allow your snake to slither through your hands in the warm water, and massage its abdomen gently.

If this doesn’t work, consult an experienced reptile veterinarian. There’s a chance your snake’s bowels are obstructed, and it may need medical help.