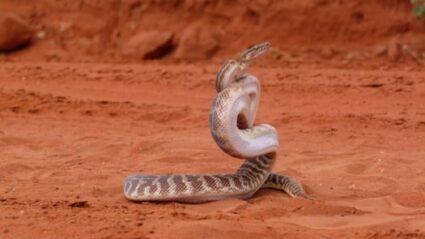 When a snake strikes, it lunges forward across the ground, so you do not need to be touching the snake in order for it to reach you. This may make you wonder just how far away from a snake you need to stay away.

A snake can comfortably strike at a distance around ½ of the snake’s total length. For a 3-foot-long snake, that amounts to a distance of 1.5 feet away. It is possible for a snake to strike further than that, if it is striking downhill or from a fully coiled position. A snake can strike from any position, but it strikes most accurately when it is coiled.

The main thing about a snake that makes humans wary of it is its bite. Even a bite from a nonvenomous snake can be scary and potentially harmful. Knowing how far away a snake can strike from is vital for keeping yourself safe. We’ll look at the factors that determine the striking distance of snakes.

Contents show
1 Snake Striking Distance
1.1 Can a Snake Strike if Not Coiled?
1.2 Striking Position of Snakes
1.3 How Accurate is a Snake’s Strike?
1.4 Can A Snake Jump At You?
1.4.1 What About Flying Snakes?
1.5 How Does It Strike So Quickly?
1.6 Can A Snake Spit Venom?
1.7 What Snake Strikes The Farthest?

For a snake, a bite is its best defense mechanism. It simply does not have any other way to lash out at a threat. While a snake would prefer to flee than fight, if it feels cornered, it will strike at you. While not every snake is venomous, every snake bite should be treated like the health threat that it is. Even a nonvenomous bite can become infected by bacteria.

The best way to avoid getting bitten by a snake is to stay away. The question remains, how far away do you need to stand in order to be safe? How close to a snake can you get before you are in the snake’s striking range?

How far away a snake can strike mainly depends on the size of the snake. Other factors are what position the snake is in and any features of the terrain that may impact its ability to strike.

Most snakes can strike out at a distance between 1/3 and ½ of the snake’s total length. If you are facing a snake which is 3 feet long, then you can assume that the snake can strike at a target up to 1.5 feet away. If the snake is 5 feet long, it may be able to strike up to 2.5 feet away.

Still, it is better to err on the side of caution and stay farther away. There are cases in which rattlesnakes have struck up to 2/3 of their body length instead. For a 3-foot-long snake, that’s a whole 2 feet or more.

Can a Snake Strike if Not Coiled?

There is a common belief that a snake can only strike if it is in a coiled position. This is not the case.

While a snake’s most accurate and fastest strikes come from a coiled or partially coiled position, a snake can strike from any position. If you grab a snake or even accidentally step on it, then it will simply twist its body enough to bite you.

In this case, the snake will bite at whatever body part is closest. This is not a premeditated strike, but rather a desperate bid for freedom. Note that it is also possible to be hurt by a bite from an unconscious or dead snake, due to reflexive biting action.

If a snake cannot flee from a threat, it will stand its ground. The snake will likely prepare to strike at the threat by positioning itself in a distinctive striking position.

The snake will coil up the lower half of its body. This coil serves the defensive purpose of shrinking the snake into a smaller area. It is easier for the snake to defend its entire body when it is coiled into a smaller space, rather than to defend a stretched-out torso.

The upper third of the snake’s body, including its head, will be held aloft in an S-shaped curve over the coil. The snake will keep its head pointing towards the threat. This may involve the snake shifting in a circle if the threat walks around the snake.

A threatened snake may also try to warn away the threat by hissing or by flattening out its head. If it is a rattlesnake, it may shake its rattle to make that well-known rattling sound. Do not count on this sound to tell you that danger is near. Even if the rattlesnake does not make a rattling sound, it may still be preparing to strike.

When it strikes, the snake will use the coil of its body as a stable platform from which to thrust itself forward. The S-shape of its neck will come at you, the snake will open its mouth, and stab out with its fangs. Depending on the species of snake, this may be a single strike, or the first in a series of many quick bites.

How Accurate is a Snake’s Strike?

If a snake has the opportunity to time and aim its strike, then its strike will be more accurate and quicker than a reflexive defensive bite. This is how a snake hunts its prey, waiting to ambush the smaller animal. Humans are not a snake’s usual prey, but instead are perceived as a threat to the snake.

Additionally, if a snake is overly excited or frightened, its strike will be less precise. Sometimes a worked-up snake will miss its target when it strikes.

Can A Snake Jump At You?

However, a snake can lift the front of its body off of the ground a significant amount, which can look like a jump. It can make quick striking movements that result in some or all of the snake’s body lifting off of the ground.

It is also possible that if a snake is striking on uneven terrain for gravity to take over. A snake striking in a downhill direction may end up losing its balance and falling down the hill towards you. If a snake is higher up on a slope than you are, assume that it can strike further than it usually would.

While caution on hills is a good call, you do not need to worry about a snake fully leaping across your yard at you. The only time a snake becomes fully airborne is if it swings from a branch or falls out of a tree.

What About Flying Snakes?

A few snake species found in Sri Lanka and Southeast Asia are known to “fly” through the air. This is a unique skill, but it is not really a jump either.

These “flying” snakes climb to a high tree branch and swing themselves out into the air. As they descend, the snake flattens out its body by widening its ribs. This allows the snake to glide down to a lower branch.

They do not use this gliding to come all the way down to the ground. So don’t worry – even if you live in Sri Lanka, you do not need to worry about a snake falling out of the sky and onto your head.

How Does It Strike So Quickly?

Where a snake is large or small, skinny or heavy-bodied, they are able to strike at similar speeds. This might seem strange for heavier snakes, such as puff adders. Shouldn’t a larger, heavier animal move more slowly? How do snakes strike so quickly regardless of weight or size?

According to the Journal of Experimental Zoology, heavy-bodied snakes make use of their vertebral extensor muscles. These muscles in the snake’s back are put under tension while the snake prepares to strike, and then loosen up as the snake rapidly extends its body towards its target.

It’s a bit like compressing a spring and then letting it leap back out to its full length. Often this snapback is powerful enough to move the snake’s body across the ground a bit as it strikes.

A snake needs to strike quickly in order to catch quick prey such as mice and rats. How fast a snake can strike is also a matter of life and death if the snake is facing a threat.

Strike speed varies from species to species. A rattlesnake can strike out accelerating at a speed of over 900 feet per second squared. To compare, a racecar going from 0 to 60 in one second is only accelerating at a rate of about 90 meters per second. These snakes are fast.

Can A Snake Spit Venom?

Most venomous snakes only strike in a way that results in their jaws making contact with your skin. One snake which does not need to reach you as it strikes is a cobra.

According to Physiological and Biochemical Zoology, some cobras “spit” out venom at a threat. This spitting behavior is not a very accurate strike. The venom does not land in a single targeted point, but is distributed across a surface.

A cobra can spit venom at a distance of about 3 to 6 feet depending on the individual subspecies. This is less distance than a cobra will strike from, so it is best to keep that far away from a cobra regardless.

What Snake Strikes The Farthest?

The snakes which strike the farthest are, naturally, the longest snakes. The longest venomous snake is the king cobra. This snake can grow to be over 18 feet, meaning that it can easily strike out from a distance of over 9 feet.

The longest nonvenomous snake is the reticulated python. This snake can grow to be over 30 feet. That means it has a strike range of over 15 feet.

Of course, most of the snakes you will come across in your life are much shorter than these lengths. The average size for a king cobra is only 10 to 13 feet. However, it is good to know how far a snake strike can potentially go.

Now that you know how far away a snake can strike, you are well equipped to keep your distance. If you do get bitten by a snake, stay calm.

MLA Style: Carter, Lou. "How Far Away Can a Snake Strike?" Snakes For Pets, (December 15, 2020), https://www.snakesforpets.com/how-far-away-can-a-snake-strike/.