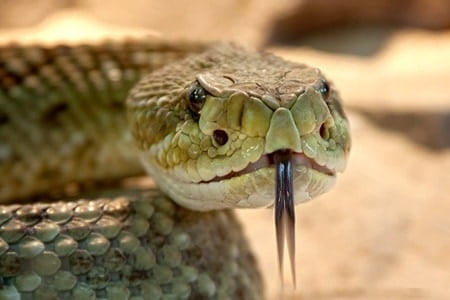 While they are not burrowing snakes, rattlesnakes live in dens, or holes in the ground. These dens are a place to curl up and stay warm, safe, and hidden. But rattlesnakes do not always stay inside their dens.

A rattlesnake uses its den for protection, especially during its winter brumation. Rattlesnakes will travel a mile from their den in order to find food, a basking spot, or a mate. Male rattlesnakes will travel farther than females to find a mate during their mating season. Some species of rattlesnakes are migratory, leaving behind their winter dens in the spring and returning when the seasons turn cold again.

Let’s explore the world of rattlesnake travel and why their dens and their movement are so important to their survival.

Contents show
1 What Is The Purpose of A Rattlesnake Den?
1.1 What Kind Of Hole Will a Rattlesnake Use?
1.2 Why Would A Rattlesnake Leave Its Den?
1.2.1 Find Food
1.2.2 Sun Themselves
1.2.3 Find Water
1.2.4 Find A Mate
1.3 How Far Do Baby Rattlesnakes Travel From Their Den?
1.4 Do Rattlesnakes Migrate?
1.4.1 Snakes Migrate In Different Ways
1.4.2 How Does Migration Affect Snake Population Diversity?
1.4.3 What Factors Affect Whether A Snake Migrates?

What Is The Purpose of A Rattlesnake Den?

Rattlesnakes use their dens for shelter and protection. The snakes tend to congregate in their dens during the winter months, as a place to share body heat and hibernate. These dens are often referred to as “hibernacula,” which is the Latin word for a winter quartering tent.

Rattlesnakes are not good at digging, so their dens tend to be pre-made. A rattlesnake den can be in any naturally occurring crevice in the rattlesnake’s habitat. Rattlesnake dens are most commonly in stone outcroppings, but any hole which provides them with enough protection from the winter cold will suffice.

How many rattlesnakes share the same den depends on the climate and the amount of food. If there is a wide abundance of food, then there may be very few snakes in a den. Additionally, if winters are mild, the snakes will not spend much time in their den. Where there is less food and colder winters, you are more likely to find dens with more snakes inside.

It can be difficult to tell whether a hole is a rattlesnake den unless there is currently a rattlesnake inside. Be careful if you are hiking in areas where rattlesnakes are known to live. Avoid sticking your hand or foot into unknown holes. If you hear the iconic rattling sound, turn around and walk back the way you came.

What Kind Of Hole Will a Rattlesnake Use?

Since rattlesnakes are not burrowing snakes, they need to find a cave that already exists. They may choose from a variety of holes:

A snake is looking for a space that will protect them from changes in temperature. The den should also keep them out of sight from threats. Rattlesnakes may be fearsome predators themselves, but they are also the prey of kingsnakes.

Why Would A Rattlesnake Leave Its Den?

There are various reasons why a rattlesnake may leave its den. On a regular day, a rattlesnake may travel more than a mile away from its den just to find its favorite hunting grounds or basking spot. Unless it is migrating, the snake will regularly return to its den for a safe, warm night’s sleep.

Rattlesnakes need to eat once a week when they are young, and once every two weeks when they are older. They hunt small rodents and lizards, depending on the species and size of the individual rattlesnake.

Rattlesnakes typically hunt alone. If you see a lone rattlesnake moving around, it is unlikely that others will be near.

Rattlesnakes are ectotherms, or cold-blooded animals. This means that they cannot regulate their body temperature on their own, like humans and other mammals can. So, in order to maintain the correct body temperature, a rattlesnake must find a location which is the temperature that they need.

The behavior of finding a sunny spot and lying in it to warm up is known as “basking” or “sunning.” You may see a rattlesnake lying in the sun for hours at a time, keeping itself comfortable and warm.

While rattlesnakes may drink infrequently, they will still travel long distances to find a pond or stream to drink from.

Snakes are not overly social animals. However, when a rattlesnake enters its mating season, it will actively seek out the company of a rattlesnake of the opposite sex.

How Far Do Baby Rattlesnakes Travel From Their Den?

Unlike many other snakes, rattlesnakes give birth to live young. A female rattlesnake will seek out its den to give birth, so the babies’ first known environment is their safe, secluded den. However, after this point, the mother is not very involved with protecting the young.

While eastern diamondback rattlesnakes will stay near their mother for the first 2 weeks of their life or until their first shed, most other rattlesnake hatchlings will disperse mere hours after birth.

At birth, a baby rattlesnake’s venom is already as potent as an adult rattlesnake. This means that it is free to roam just as much as any adult. It will use its den as shelter from the cold and protection from predators, but it will venture out in search of food, water, and basking spots.

National Geographic Research reports that many kinds of snake are migratory, including some species of rattlesnake. For example, Wyoming prairie rattlesnakes (Crotalus viridis viridis) have a lengthy seasonal migration pattern.

These rattlesnakes travel away from their dens in springtime. This behavior is apparently motivated by a need to find more food, rather than a need for the snake to find a warmer climate. These rattlesnakes feed on deer mice and so the rattlesnakes want to go where these rodents are more plentiful. The snakes return in the fall to their previous dens, where they brumate through the winter.

Another migratory rattlesnake is Crotalus atrox, the western diamondback rattlesnake. Copeia, reports that the rattlesnakes do not wander randomly through their Southwestern Oklahoma habitat. Instead, they move on directed, consistent courses. These snakes may be using cues from the sun to stay on course.

The western diamondback rattlesnake moves away from its den in the spring and back to the den in the fall. Its summer range is around one to two kilometers away from its den. These snakes move around outside their dens more actively during mid-day in the winter and in the middle of the night in the summer. During the spring and the fall, they mostly travel in the early morning and the late evening.

Researchers at the University of Victoria in British Columbia, Canada discovered that not all individuals of a species of rattlesnake exhibit the same kind of migratory behavior. They compared two neighboring den sites for Crotalus oreganus, the Northern Pacific rattlesnake.

The snakes at one den site were avid migrators. They undertook a long-distance directional migratory behavior that remained consistent across the years of the study. These rattlesnakes traveled out of the habitat they were commonly known to live in. They moved away from the grassland steppes and into forests at a higher elevation.

The researchers suggested that there may be unknown factors in the snakes’ environment that dictate whether they feel the need to migrate.

When a species is free to migrate, this means that genetically diverse individuals can interact and potentially mate. This is beneficial for the genetic diversity of a species. In-breeding between individuals with too-similar genetics can lead to medical problems down the line.

Researchers at Washington University in St. Louis hypothesized that gene flow among Crotalus horridus, the timber rattlesnake, is limited within snake dens. With their study, they confirmed that male snakes tended to roam farther to find a mate than female snakes. While gravid female timber rattlesnakes were prone to travel, they would generally return to their den in order to give birth.

The biggest factor the researchers found to limit genetic diversity was a limited number of breeding adults. Therefore, the snakes which were more able to migrate and find different communities of timber rattlesnakes gave birth to hatchlings with greater genetic diversity.

What Factors Affect Whether A Snake Migrates?

Rattlesnakes move around when they have a need to. If conditions are great near the den, then the rattlesnake is less likely to leave. For example, if a rattlesnake has a lot of prey available near its den, then it will not feel the need to travel long distances to find more food.

When they do migrate, rattlesnakes have other species to contend with, such as humans. As humans build more roads and cities, this can disrupt a rattlesnake’s traditional migratory route, forcing the rattlesnake to stay near its den in order to avoid getting hit by a car.

In the Ozark Mountains, the U.S. Forest Service will close roads twice each year to allow migratory snakes to migrate. These include timber rattlesnakes. In the springtime, these rattlesnakes are moving from their wintering dens in the limestone cliffs to their swampy summer feeding grounds. In the fall, they return from the swamps to their dens to hibernate.

Climate change is another factor affecting snake migration. As temperatures and weather change from year to year, what was once a comfortable den might no longer be a safe place for a snake to spend the winter. This forces rattlesnakes to find a new home.

MLA Style: Carter, Lou. “How Far Do Rattlesnakes Travel from Their Den (Hibernaculum)? (With Video)” Snakes For Pets, (March 22, 2020), https://www.snakesforpets.com/how-far-do-rattlesnakes-travel-from-their-den/.

APA Style: Carter, L. (March 22, 2020). How Far Do Rattlesnakes Travel from Their Den (Hibernaculum)? (With Video). Rabbit Care Tips. Retrieved May 17, 2022, from https://www.snakesforpets.com/how-far-do-rattlesnakes-travel-from-their-den/