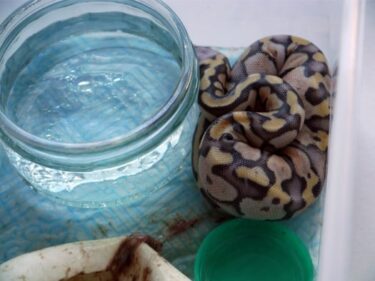 As captive-bred snakes are typically sold as babies, many owners are curious about how quickly ball pythons grow. Ball Pythons start small and, compared to their behemoth cousins, remain relatively small in size.

Ball Pythons grow rapidly during their first few months of life. This species reaches adulthood when they become sexually mature, which normally takes 3 years. There are many factors that might affect how fast your Ball Python grows, including diet, individual eating habits, and the environment. Tracking your Ball Python’s weight is an excellent way to ensure that your snake is growing at a healthy rate.

Snakes never stop growing! It’s not a myth – it’s proven by science that snakes are indeterminate growers. However, once your Ball Python reaches adulthood, its growth will slow to a crawl. Knowing how big your ball python will get is key to providing the correct-sized enclosure.

How Big Do Ball Pythons Get?

Ball Pythons are one of the most popular snake breeds to own. Their compact size, stunning morphs, and docile demeanor make them an attractive breed for experts and beginners alike.

Compared to other pythons, like the reticulated python, ball pythons are small. They average at 4 feet long. Males of the species are typically smaller than females, which can sometimes grow up to 5 feet long. Sexual dimorphism, where the female is bigger than the male, is normal in snakes.

On rare occasions, ball pythons can even reach 6 feet long. As with any species, smaller than average specimens, or runts, can occur. There are factors, beyond genetics, that can impact how large and fast a ball python will grow. The Journal of Animal Ecology has found that growth rates are heavily impacted by food availability and environmental factors.

Healthy Ball Pythons usually reach their full adult size at 3 years of age. However, there are multiple factors that can impact their rate of growth.

The Journal of Comparative Physiology found that young Ball Pythons quadrupled in size over their first year. This is typical of multiple snake breeds. The table below offers a comparison between how long it takes different species of snake to reach their adult size in captivity.

Note: average adult sizes are determined when they become sexually mature in most circles. As such, females often take longer to reach their adult size and mass, which can skew averages.

Genetics don’t impact growth rate as much as people might believe. The three major things that can impact your Baby Python’s growth are diet, health, and environment.

Your ball python’s rate of growth will be impacted by its diet. This is in relation to the quality of the food and the frequency with which it is fed. Essentially, the more calories your snake consumes, the quicker it will grow. Overfeeding (power feeding) isn’t a good for the health of the animal.

Every snake has its own habits and preferred eating schedule. However, there is a rough schedule that you can use to guide feedings. Reference the table below and make adjustments.

Choose appropriately-sized food for your snake. For example, an adult ball python of average size should be eating a medium-sized rat twice a month. Picking the right-sized food is key in providing proper meals.

What is Power Feeding

Power feeding is what some people do when they overfeed their snake to encourage rapid growth. This can also be done accidently by the inexperienced or misinformed. Overfeeding refers both to the frequency of feedings and the size of the meal.

Responsible owners should avoid power feeding as growth caused by power feeding results in large and unhealthy snakes. They are often overweight, can have shorter lifespans, and may require a vet’s care. Diets are most commonly prescribed to return the snake to an ideal weight.

A healthy snake will rarely have its growth negatively impacted. That said, depending on your snake’s metabolism and eating habits, a healthy snake still may not grow fast compared to others.

Underlying health issues, such as internal parasites, illness, or deformities can affect your ball python’s growth rate. Improper food that lacks in nutritional value could also be a factor.

If you notice unusual behavior it’s time to make an appointment with your vet. Odd behavior that indicates illness could be:

The health of your snake can impact how fast it grows largely because it has little to no desire to eat, or because your snake’s immune system is spending energy trying to fight an illness.

Environmental factors, such as enclosure temperature and humidity, can affect how fast your snake grows. This is due to the environment negatively affecting the snake and causing other issues, such as illness or stress.

Environmental issues can be found both inside and outside the enclosure, and can include improper:

Any of the above enclosure elements not being properly attuned to a Ball python’s needs can cause the animal to become stressed or unwell. This can lead to your snake refusing to eat, which will affect its growth rate. Fewer nutrients mean less physical growth.

A ball python’s gender will not affect how quickly or slowly it grows.

Ball pythons grow rapidly until they reach adulthood. Once they have reached this stage of their life, as with all snakes, their growth will slow to a crawl. Still, they will continue to grow over the course of their life. Considering the lifespan of a ball python can hit double digits, this means that they can reach larger sizes than expected.

Is My Ball Python Underweight?

There are multiple reasons why a snake may become underweight that have nothing to do with worrying things like illness. Snakes preparing to shed will typically fast until they have shed their old skin.

It is also normal for female ball pythons to be less interested in food during the breeding season. Males will occasionally do the same. Snakes can also be picky eaters. For example, if they refuse a mouse, they may be more interested in a small rat.

Track your snake’s weight carefully if they refuse food for an unusual length of time. Consult with your vet if your ball python loses more than 10% of their weight, or shows any other worrying signs. The signs of an underweight ball python are:

Keep a record of feedings, successful and not, what you fed it, when it excretes, and its weight. This is a good resource for you to monitor your snake’s health, and to provide to your vet should a clinic visit be needed.

Is My Ball Python Overweight?

Ball Pythons are naturally a compact, stocky snake. Knowing the signs of your snake becoming overweight as it grows is important. This allows you to adjust your snake’s diet as needed and keep them in top shape. The signs of an overweight ball python are:

Dealing with obesity in ball pythons often relies on adjusting the frequency with which they are fed and what they are fed. Rats have a higher fat content and take longer for snakes to digest due to their coarser fur and thicker skin. Mice are the opposite. An obese snake might be fed mice to encourage weight loss. Consult with your vet before making any drastic changes to your ball python’s diet.

Baby ball pythons grow rapidly over their first few months of life. As juveniles, their growth will slow until they reach adulthood, which typically takes 3 years. The rate at which ball pythons grow is determined not by genetics, but by their health and diet.

Ball pythons which are fed more frequently, or fattier foods, will naturally grow faster. Providing a proper enclosure and diet will ensure that your baby ball python grows at a healthy rate.