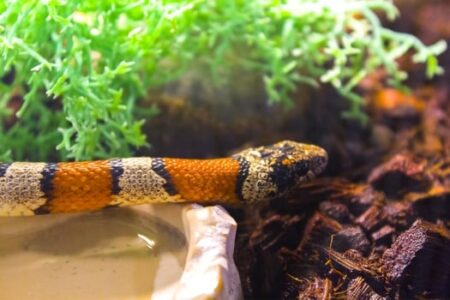 All snakes live for longer in captivity than they do in the wild. Wild snakes have their lives cut short by predation, prey shortages, and harsh climatic conditions. But the life of a captive snake is lengthened due to safety from predators, regular feeding, optimal heat and humidity settings, access to veterinary treatment, and a clean and sterile living environment.

Garter snakes have the shortest average life expectancy, rarely surviving for more than 8-10 years in captivity. A pet corn snake will live for 15-20 years, and boa constrictors and ball pythons live for 20-30 years. The lifespan of all snakes is reduced by about 40-50% in the wild. The oldest recorded snake was a ball python that lived for 48 years.

We’ll look at the average longevity for the most common species of pet snake. We’ll compare their lifespans in the wild and captivity. We’ll also look more closely at which factors affect how long snakes live, as well as how long a snake can survive without eating food.

What Is The Average Lifespan of Snakes by Species?

How long snakes live on average depends on two factors:

The table (below) covers how long snakes live. These numbers are averages, so the longevity of your pet snake will depend on how you care for it.

Each snake has different care and husbandry requirements which you must meet to ensure your snake reaches its maximum age.

How Long Do Ball Pythons Live?

Ball pythons are one of the most popular species of snake kept as pets in the U.S. They’re also one of the longest-lived snake species in the world. Native to sub-Saharan Africa, ball pythons enjoy tropical climates and can thrive in captivity if treated well.

If looked after well enough, a captive ball python can live for 20-30 years. The record for the longest-living snake in captivity belongs to a male ball python that lived at the Philadelphia Zoo.

According to a bulletin of the Chicago Herpetological Society, he died at the ripe old age of 48. So, if you’ve ever wondered “what is the maximum lifespan of a snake?” it’s probably around that age. So, what health issues can affect a captive ball python’s lifespan?

Ball Python Lifespan in the Wild

In the wild, ball pythons do not live as long as they do in captivity. The lifespan of wild ball pythons averages around 10-15 years. There are many factors about a wild environment that may lead to the death of a snake. Wild ball pythons can die from:

How Long Do Corn Snakes Live?

Wild corn snakes can be found in the U.S. They thrive in temperate climates and in captivity. However, they don’t live as long as ball pythons.

A pet corn snake will live for roughly 15-20 years. As with all snakes, this depends largely on how well you treat your snake.

Corn snakes are one of the easiest types of snakes to look after. They don’t require high temperatures or much humidity, and tend to eat well. In fact, a problem with corn snakes is that they will overeat. This can lead to:

Corn Snake Lifespan in the Wild

Wild corn snakes may not live for more than 6-8 years.

Their length rarely exceeds 5 feet, and their bodies are quite slender. Because they have no venom with which to protect themselves, they are hunted and eaten by wild animals such as:

How Long Do California Kingsnakes Live?

California kingsnakes are common in the western states. Kingsnakes are famed for their diet: they hunt other snakes, including rattlesnakes. In captivity, they can thrive on a diet of rodents.

California kingsnakes can live for 15-20 years in captivity. They have similar care requirements in terms of temperature and humidity. They also subsist on the same rodent-based diet. Health risks include:

California Kingsnake Lifespan in the Wild

In the wild, California kingsnakes tend to fare better than corn snakes. On average, they survive for 10-12 years. They risk being predated on by American wild animals (birds of prey, wild cats and canids, etc.).

How Long Do Boa Constrictors Live?

Boa constrictors, native to South American countries such as Brazil, are some of the best-known snakes. Though they are happiest in tropical rainforests and grow to quite considerable lengths (up to 13 feet), they have become a popular pet for experienced snake keepers.

In captivity, boa constrictors do extremely well. The oldest reported boa constrictor was 40 years old when he died in 1977 (again, at the Philadelphia Zoo). However, this is an extreme example. With correct care, most pet boas can reach 20 to 30 years old.

Boa constrictors are slightly harder to care for than other snakes. Some of the issues that may reduce your boa constrictor’s lifespan include:

Boa Constrictor Lifespan in the Wild

Boa constrictors live for around 15 to 20 years in the wild. It’s uncommon for them to reach the same age that they would in captivity. This is because South American rainforests pose all sorts of dangers for these snakes.

Boa constrictors have many natural predators. These include birds of prey, reptiles (caimans) and jaguars. Juvenile boa constrictors are the most at risk of predation as they’re smaller and less able to defend themselves.

Arguably the biggest predators of boa constrictors are humans. Their skins are often harvested to create shoes, bags, and clothing.

How Long Do Garter Snakes Live?

These backyard snakes are endemic to North America and can be found in almost every contiguous state. There are many species which are referred to as “garter snakes,” and they all belong to the genus Thamnophis.

Because garter snakes are small and are non-venomous, they make good beginner pets. Garter snakes don’t live for as long as other snakes, yet they can still live for several years if treated well.

Most captive garter snakes live for 6-10 years. Some have reached 15 years, although this is rare. These can affect the lifespan of the snake:

Garter Snake Lifespan in the Wild

Garter snakes in the wild do not live very long lives. The average lifespan of a wild garter snake is just 3-4 years. This is usually due to:

Western hognose snakes are commonly kept as pets due to their small size, unique appearance, and placid temperaments.

They are identifiable by their upturned “snout,” which they use for digging around in the sandy soil, in search of prey. Western hognose snakes are native to the U.S., Canada, and Mexico.

You can expect a well taken care of Western hognose to live for 15 to 18 years. Females are larger than males, but have an equal lifespan. Some of the issues of keeping your Western hognose include:

In the wild, hognose snakes live between 9 and 12 years. They can live longer than other small American snakes due to their elaborate defense mechanisms.

When threatened, hognose snakes “play dead” by rolling onto their backs and secreting a foul-smelling musk. This dissuades predators.

When this dramatic display fails, hognoses are preyed upon by the same animals that threaten the other U.S. native snakes. This includes birds of prey, wild cats, and larger snakes.

How Long Do Reticulated Pythons Live?

Reticulated pythons, native to Southeast Asia, are famed for being one of the largest snakes in the world. They can reach lengths of 20 feet or more.

Reticulated pythons (or retics) have an impressive lifespan that matches their length. It is not unusual for a retic to live for 20 to 25 years, or even longer, in captive care. Of course, this does depend on the level of care that is provided. Pay particular attention to:

Reticulated Python Lifespan in the Wild

There’s not much that preys on adult reticulated pythons. Even the babies are at least 2 feet long. Retics can easily survive for 15-20 years in the dangerous Southeast Asian wilderness.

Hatchlings and juveniles can be preyed upon by birds of prey, big cats, king cobras, etc. However, once retics become adults, they are apex predators.