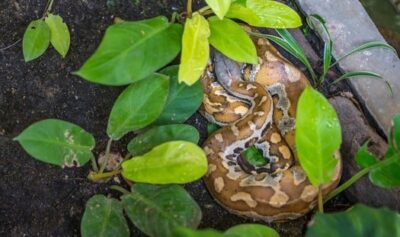 It can be hard to tell when snakes are asleep or awake. Snakes don’t have eyelids, so we assume that snakes don’t sleep at all. However, snakes do sleep, but we don’t always realize when it’s happening.

The sleeping habits of snakes have been little studied. We know that snakes do sleep and brumate as needed. However, we cannot conclusively say how long snakes sleep for, or how sleep occurs when snakes can’t close their eyes. Almost all snakes are ambush or opportunistic predators. A snake needs to constantly be alert in case its next meal comes by. Conversely, a snake always needs to be on the lookout for predators as well. Given this, and behavior seen in other reptiles, some suggest that snakes experience unihemispheric sleep.

Snakes have evolved an assortment of unique qualities, including the ability to literally sleep with their eyes open. Recent studies into lizards suggest that many reptiles might even have dreams.

How Do Snakes Sleep?

Snakes need sleep to survive. How a snake sleeps may not look like sleep to us because we must close our eyes. In shutting our eyes, we send a signal to our brain to ‘shut off’ and begin the stages of sleep. Snakes don’t have eyelids. A snake can’t send this ‘sleep time’ signal humans do. Naturally, this leads to people believing that snakes don’t sleep at all.

Humans experience both REM and SWS. They are considered vital stages in a healthy sleeping cycle and allow us to function optimally. The study found that bearded dragons experienced an average of 350 80-second SWS/REM sleep cycles every night. What this means for snakes is that they, as reptiles as well, may undergo similar sleep cycles.

Unfortunately, we don’t know how snakes sleep. Logical theories have been drawn, but many are yet to be scientifically explored. Let’s look at a theory that has scientific merit: unihemispheric sleep.

What Is Unihemispheric Sleep?

It is theorized that snakes might experience a form of unihemispheric sleep. Unihemispheric sleep is when one half of the brain sleeps at a time. This is common in aquatic animals that must move to breathe and “sleep with one eye open” for predators. Dolphins and fish are common examples.

As outlined in Ethology, unihemispheric sleep is achieved by closing one eye at a time. The half of the brain neurologically connected to that eye is put into a rest state once the eye closes. This allows the animal to exist in an alert state will also sleeping.

The theory that snakes may sleep using this method is not unfounded. Snakes need to constantly be alert for prey and other predators, and must conserve energy where they can. However, more research is needed to explore how snakes might exploit unihemispheric sleep when they lack the ability to close their eyes.

REM is the sleep stage in which the subject is dreaming. Humans experience REM sleep almost every night, even if we don’t remember it. REM has been observed in other species. Dog owners have witnessed their pet chasing a dream rabbit while they sleep. One neuroscientist speculates that reptiles could dream about recent events, such as food, goings-on in its environment, and encounters with its own species.

Brumation is a state of semi-suspended animation. During brumation, snakes live off of stored body fat and move very little.

In preparation for brumation, a snake will seek out or create a den. This allows the snake a degree of protection from predators and insulation from the deadly cold.

Why Do Snakes Brumate?

Researchers at the Middle Tennessee State University explained it well. Reptiles that live in environments that experience broad temperature fluctuations use brumation as a survival tactic. This covers many species of snake that experience warmer summers and cooler winters. Not only does this semi-suspended state lower a snake’s metabolism, but it also allows it to preserve an ideal body temperature.

Brumation allows snakes to survive everything from the harshest winters to sudden cold spells. Many species of snake, like garter snakes and bull snakes, will emerge from brumation and immediately begin seeking a mate. This is because warmer weather, which rouses snakes from brumation, often signifies the start of spring. Aestivation is brumation’s equivalent tactic for surviving extreme heat and drought.

How To Tell If a Snake is Asleep

Telling when a snake is asleep can be tricky. The cue we recognize as sleep (eyes shut) doesn’t exist for snakes. However, there are some ways to reasonably guess when a snake is taking a nap given what we know about their habits. The main one being: if you can’t see a snake, it is likely asleep.

Snakes are both predator and prey. Like many animals in this category, a snake will attempt to find a safe place to rest. For a snake, this often means a place only slightly larger than its mass or where predators cannot reach it. This could be a burrow, den, hide, hollow of a tree, submerged cave, or any other nook or cranny to be found. As three examples:

Conversely, for captive snakes, if your snake is hiding it could be asleep. Otherwise, possible signs that your snake is asleep are:

Where Do Snakes Sleep?

Basically, where a snake feels safest is where it will sleep. This is why it is important to provide pet snakes the appropriate enclosure and hides. A snake that feels unsafe or anxious is less likely to have restful sleep. Over time this can have a detrimental effect on its health.

When Do Snakes Sleep?

It has been noticed that different species of snake do seem to keep to different sleeping schedules. Unfortunately, there have been no studies that properly define what these schedules are.

Broadly, snakes are most often classified as nocturnal or diurnal. This means it is active either during the night (nocturnal) or during the day (diurnal). Some snakes have also been noted to be a mixture of both. A logical assumption would be that a snake sleeps during the period in which they are not active.

As an example, green tree pythons are nocturnal and would thus sleep during the day.

Why Do Snakes Sleep with Their Eyes Open?

Asides from literally being unable to close its eyes, a wild snake must constantly be on alert. In the wild, a snake always has to be on the lookout for its next meal. Or, the next predator that tries to make a meal out of it.

Obviously, this would make getting a full night’s rest somewhat difficult. As said above, it is believed that snakes could experience unihemispheric sleep to get around this. This unique state of sleeping allows a snake to rest while also remaining somewhat alert.

A snake can’t blink, nor does it need to. Instead of eyelids, snakes have evolved a special eye-cap scale. This is called the ocular scale, or brille, and protects the eyeball from dirt and other particles. Some consider the ocular scale an eyelid and, in a way, this means a snake always has its eyes shut.

Is My Snake Sleeping Too Much?

If you notice other concerning signs in conjunction with it sleeping too much then consult a reptile vet. Such signs could be:

It’s not always a worst-case scenario. Your snake may be entering brumation. Even though a pet snake lives in a climate-controlled enclosure, it could still be instinctual for it to enter a period of lowered activity.

Research into the natural behaviors and habitats of the snake’s species will assist with confirming normal and abnormal behavior.

Snakes sleep, though how and for how long remains largely a mystery. Theory suggests some form of unihemispheric sleep. Scientists studying reptiles have found that lizards experience REM and SWS stages of sleep. This hints that reptiles do sleep, and that they might even dream.