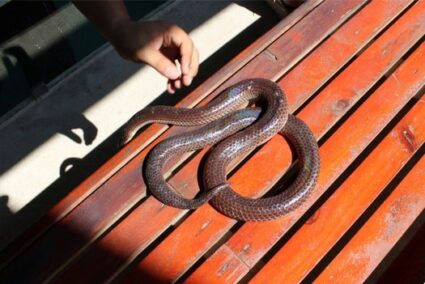 The New England Journal of Medicine stated that around 2,000 Americans are bitten by venomous snakes every year. Fortunately, fatalities have averaged less than 5 per year. However, if you do get bitten, you will experience the adverse effects of a venomous snake bite quickly.

The searing pain of a snake bite will be almost instant. This will be a stinging sensation, leaving 2 puncture wounds. The area of the bite will also start to turn red and swell up. Toxicity takes around 30 minutes to take hold. After this, symptoms can include a racing heart, dizziness, muscle weakness, facial numbness, and blurred vision.

Some venomous snakes are more deadly than others. For example, the Eastern Diamondback has a far more toxic venom than a copperhead snake. Also, even the most venomous snake may give you a dry bite. This happens where the snake delivers a bite without injecting any venom.

What Are The Effects of Getting Bitten by a Snake?

There are over 3,500 species of snake in the world, and almost all of them bite. This is how snakes subdue their prey before consuming it. Just 600 of these snakes are venomous, and only 25 are native to the United States.

Snake bites should never be taken lightly. Even if a snake is nonvenomous, it is still a wild animal. This means it potentially carries bacteria, and a bite wound is at risk of infection. If the snake was venomous, you will start to experience the side effects of this venom within 30 minutes.

How to Tell if a Snake Bite Was Venomous

You may be able to tell if a snake was venomous by looking closely at the wound. Venomous snakes have long, hollow fangs. These are designed to release toxins into prey. They leave clean puncture wounds.

All snake bites start out the same way. The wound will redden, swell, and may display bruising. Punctures from venomous snakes may bleed profusely. As explained by the Biochemical Journal, snake venom often has anticoagulant properties. The wound will refuse to clot.

If a snake injected venom, you will feel the effects within 30 minutes. It could be sooner than this if the bite occurred close to the heart. Adults with weak hearts will also experience side effects much sooner.

You may feel fine after half an hour. It’s true that you may have experienced a ‘dry bite’ as a warning. Roughly half of all attacks from venomous snakes are dry bites. The snake is conserving its venom to hunt as it’s a precious ingredient that’s vital to a snake’s survival.

Symptoms of a Venomous Snake Bite

Different species of snake provoke varying symptoms. Do not assume that, because you are not experiencing all of these issues, you are unharmed:

It is not advisable to wait for symptoms to manifest. If in doubt following a snake bite, seek medical advice. You will likely be asked if you can identify the snake that bit you. Different snake venoms require different antivenin treatments. Do not get too close to the snake to do this. Certainly do not disturb the snake further in an attempt at taking a photo.

Explain that you cannot be sure. It is a safe assumption that the snake that bit you was one of 4 species. Geography, the bite wound and symptoms will tell healthcare professionals everything else they need to know.

Different subspecies of rattlesnake are found all over the USA, in any warm and arid climate. Prairies and deserts are the most common dwelling places. These snakes will emerge when the sun is high, seeking warmth.

Rattlesnakes are notable for their distinctive rattle. Oftentimes, these snakes will warn before biting by shaking their tails. Rattlesnakes account for roughly half of all venomous snake bites in America. Most often, this will involve the administering of antivenin.

Copperheads are found in the east of the U.S., most notably Texas. These snakes use a much milder venom than America’s other venomous snakes.

Like many snakes, copperheads are shy. Typically, this will only bite if stood upon. They differ from other snakes in their approach to self-defense, though. Most snakes will take flight when frightened. Copperheads freeze in fear when encountering humans.

If you find this snake staring at you, back away. Turn tail when safe and walk away in the opposite direction. Any further step forward will be treated as an act of aggression, and a bite will follow.

Cottonmouth snakes are native to wetlands, particularly Florida, Virginia, and Texas. These snakes are typically found in or around water.

Cottonmouths are more aggressive than other snakes. Swimmers risk falling foul of these snakes. They will attack anything they perceive to be invading their territory. Before attacking, this snake will open its mouth, revealing white markings.

Cottonmouths have potent venom. Of all venomous snakes, the water moccasin venom has the highest anticoagulant properties. A bite from this snake will not clot. In addition, the venom moves quickly through the body.

As with all snakes in the US, fatalities from cottonmouth bites are very rare. As explained by StatPearls, though, the venom of this snake can cause localized necrosis. People have been known to lose limbs due to not reacting to cottonmouth venom fast enough.

Pound for pound, the coral snake is the deadliest snake in America. These snakes pack the most toxins into their venom, despite being smaller than other snakes. This means that a bite from a coral snake always requires immediate medical attention.

Coral snakes are found in the southern states and have a distinct appearance. The scales of a coral snake are typically black, red and yellow. Several harmless snakes, most notably the scarlet kingsnake, have evolved to look similar. These nonvenomous snakes will rarely attack humans. They resemble coral snakes to provoke fear and avoid conflict.

Never approach a coral snake to get a closer look and check if it is venomous. If so, the bite will be swift and dangerous. If you can see the snake from afar, check the coloring of its scales. Coral snakes and kingsnakes have slightly different bandings.

Coral snakes will have red scales connected to yellow. Kingsnakes have black bands between colors. This has been immortalized in a rhyme – “red and yellow can kill a fellow, red and black is a friend of Jack.”

Reacting to a Venomous Snake Bite

The most important thing when reacting to a snake bite is to stay calm. If you panic, your heart rate will increase. This, in turn, will spread the venom around your body faster. Remaining calm affords more time to gain medical attention.

In addition, you can perform basic first aid while waiting for an ambulance. Do not attempt to suck the poison from a wound. Instead, undertake the following protocols:

Upon arrival at a hospital, further tests will be run. The approach to healing will be based upon your condition. If possible, the venom will be flushed out of your system using intravenous fluids. Heart health and oxygen will also be monitored.

Antivenin will often be required but will only be used if necessary. As The Journal of Trauma explains, antivenin can cause allergic reactions and post-administration serum sickness.

There is no hard-and-fast rule about how long it takes to recover from a snake bite. It depends on the severity of the bite and the individual. Some people will discharge themselves on the same day without care. Others may need to stay in the hospital for up to a week.

How Long Does it Take to Die from a Snake Bite?

Obviously, this depends on a range of factors. These include:

The closer to the heart the snake bite was, the faster fatality becomes a possibility. Multiple bites also potentially mean more venom in the bloodstream. This will obviously be more dangerous than a solitary bite.

In addition, allergies can cause fatality in snake bites. It is not common, but snake venom can spark anaphylactic shock. This will obviously be a medical emergency over and above the administering of snake venom.

For an average, healthy adult, it takes several hours for a snakebite to kill. In the vast majority of cases, you’ll have enough time to seek medical care. Call 911 as soon as you are bitten.

Left untreated, snake venom continues to circulate. This could take place overnight if you do not notice the side effects of the venom. Even if you survive the experience, loss of limbs is possible. Do not take a chance, even if you feel fine.

Due to good healthcare, most Americans make a full recovery from a snake bite. If you act quickly, you are likely to make it through the experience.

MLA Style: Carter, Lou. "How Long Does It Take to Feel the Effects of a Snake Bite?" Snakes For Pets, (December 15, 2020), https://www.snakesforpets.com/how-long-does-it-take-to-feel-the-effects-of-a-snake-bite/.

APA Style: Carter, L. (December 15, 2020). How Long Does It Take to Feel the Effects of a Snake Bite?. Snakes For Pets. Retrieved December 15, 2020, from https://www.snakesforpets.com/how-long-does-it-take-to-feel-the-effects-of-a-snake-bite/