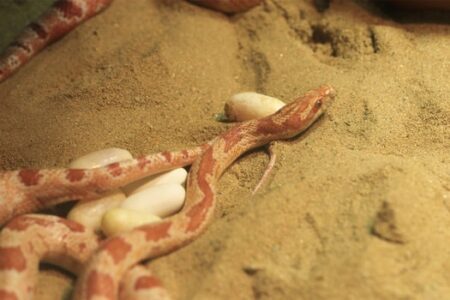 If you’re interested in breeding pet snakes, or you live in an area populated by wild snakes, you might be interested in how many eggs snakes lay per clutch. Most snake species lay eggs, although some give birth to live young.

The average number of snake eggs per clutch is between 6 – 30. This varies heavily by species, with some being more prolific egg-layers than others. For example, reticulated pythons lay up to 80 eggs at a time, whereas Sonoran coral snakes may only lay 2 eggs per clutch.

We’re going to look at how many eggs different species of snakes lay at one time. We’ll also explore how often, and what time of year, snakes lay a clutch of eggs. Finally, we’ll look into where snakes lay their eggs, and how many young typically survive from each clutch.

What Kind of Snake Lays Eggs?

How Many Eggs Do Snakes Lay at One Time?

Snake eggs are usually bright white, soft, and leathery. How many eggs a snake lays at once will depend on two different factors:

Ball pythons (also called royal pythons) are not native to the U.S., but they are one of the most popular pet snakes. This is because of their relatively small size and gentle, docile nature.

Ball pythons typically lay around 3 to 11 eggs at one time, depending on the snake’s size and health. The average clutch size is approximately 6 eggs, although some owners have reported clutch sizes of 13 or more.

Corn snakes are a species of rat snake, identified by their bright orange coloring with darker patches, outlined in black.

They are native to the southeastern U.S. and are abundant in the wild, but also commonly kept as pets. Corn snakes lay around 12 to 24 eggs, depending on their size.

The reticulated python is one of the largest snakes in the world, with some reaching up to 32 feet long. They are native to tropical regions in Asia, and are sometimes kept as pets by experienced snake owners with lots of space.

Due to their large size, they can lay between 25 and 80 eggs at a time.

Milk snakes are a species of kingsnake found commonly throughout the United States, and also kept as pets. Their bright red, black, and yellow colors help to disguise them as venomous coral snakes.

Out of the venomous species that you’ll find in the U.S., the only one that lays eggs is the coral snake. The others (rattlesnakes, copperheads, and cottonmouths) are all ovoviviparous, giving birth to live young.

Black rat snakes are one of the most common wild snakes you’ll find in the U.S. They’re non-venomous and a beautiful solid black color.

Females will lay between 12 and 20 eggs per clutch.

Smooth green snakes are smooth, bright green snakes. They’re quite thin for their length and are most common in the northeast and Canada.

They typically lay 2 clutches of about 5 eggs (about 10 eggs in total).

Eastern racers are one of the fastest snakes. That’s because they chase after prey rather than trying to ambush it.

Eastern racers’ egg-laying activity is highly variable in that they lay anywhere between 3 and 30 eggs per clutch.

California kingsnakes are aptly named because they’re the king of snakes. Instead of eating rodents or insects, they eat other snakes and even other members of their species.

But when it comes to egg-laying, kingsnakes are relatively typical. They lay between 5 and 12 eggs per clutch.

How Often Do Snakes Lay Eggs?

In temperate climates such as the U.S., snakes will lay 1 clutch of eggs each year. This is almost always in the early summer due to brumation.

They hide in rock crevices, burrows, and holes until the early spring. This enables them to keep their body temperature at a safe level.

When temperatures begin to rise, snakes come out of brumation and search for a mate. Snakes experience different seasons at different times. Australian snakes, for example, having their summer in December, January, and February.

It takes 1-2 months for snakes to lay their eggs after mating. However, some female snakes can retain sperm and use it to fertilize eggs at a later date.

What Time of Year Do Snake Eggs Hatch?

Once a snake lays her eggs, it usually takes about 2 months for them to hatch. The majority of snakes lay 1 clutch of eggs per year.

They will go through a period of inactivity in fall and winter, before emerging in the spring to mate. It will be early summer by the time she lays her eggs. This means that her eggs will hatch in June or July.

However, equatorial snakes can mate and lay eggs at any time of the year. This is because they don’t have cold periods. It’s warm all year long. They can have 1-3 clutches of eggs every year.

Where Do Snake Eggs Come Out?

Snakes have a specially modified part of their body called a cloaca. The cloaca deals with all waste from the snake’s body, all at once. It’s also what female snakes use for both mating and egg-laying.

So, snakes lay eggs from their cloaca. Well, most snakes, but not all. Like we said above, some snakes give birth to eggs, whereas others give birth to live young. Both green anacondas and boa constrictors are viviparous snakes.

How Many Snake Eggs Survive?

Snakes lay lots of eggs because it ensures that at least some of their young will survive. Unfortunately, there’s almost no research on the proportion of snake eggs that survive and hatch.

Take a look at this spreadsheet from the Northeast Partners in Amphibian and Reptile Conservation on the percentage of eggs that survive. For every snake, they admit that the figure is ‘unknown’. Many factors may affect the health of unhatched eggs:

A study on egg turning gives us some idea of how many eggs will survive. In Scientific Reports, 3 scientists looked at the effects of egg turning.

When snake eggs are laid, they are stuck together and won’t move/roll unless pushed. They found that 37.5% of snake eggs that moved from the position they were born died after they’d hatched. This was compared to just 4.5% if the eggs were laid and left alone.

So, a total of about 5% of snakes died after hatching in laboratory conditions. Adding in outdoor temperature variations and predation, that total would be significantly more.

MLA Style: Carter, Lou. “How Many Eggs Does a Snake Lay at One Time by Species?” Snakes For Pets, (February 29, 2020), https://www.snakesforpets.com/how-many-eggs-does-a-snake-lay/.