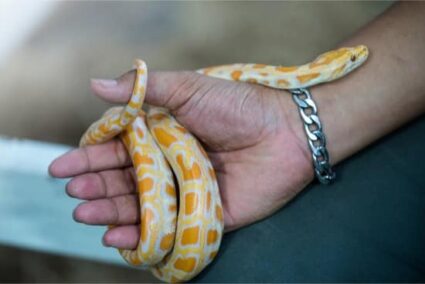 If you are new to snakes, knowing how to handle a ball python for the first time is essential information. There are occasions when you shouldn’t handle a snake, and times when it is really important to do so.

Picking up a ball python for the first time should be done once it’s adjusted to its new home. Once a snake is settled, the mid-body hold is the best technique for picking it up. It is key to avoid over-handling a snake as this can stress it out. Conversely, keeping a ball python docile requires regular handling sessions. It is suggested that the ideal number of times a snake should be handled is 4-5 times a week.

A snake can’t tell you when it wants to be left alone. It is up to the owner to know the signs that a snake is acting defensively. That said, some of the less friendly ball pythons may need to be tamed a little. This involves handling the snake in spite of the defensive behavior.

How To Handle a Ball Python

Ball pythons, due to their size, are relatively easy to handle. The technique to use is the same for many snakes, the mid-body hold.

Pick the snake up by its middle and support it using your hand and forearm. Larger ball pythons may require the use of both hands. Your hand will essentially be your snake’s perch, so it is important that the snake feels supported and completely secure.

Do not pick up the snake by its neck or tail. This can hurt the snake and cause it to be wary of handling. Do not let the snake ‘dangle’ from your grasp. Move with the snake as it explores and it will settle down.

Why Handling Your Snake is Important

Handling your snake is important for keeping a snake socialized. Regular handling sessions both acclimate the snake to human contact, and prevent it from associating the enclosure being opened with feeding time.

Just as important as it is to handle a snake to keep it docile, you want to avoid over-handling the snake. Asides from taming down an ‘aggressive’ ball python, limit handling sessions to 4-5 times a week.

Handling a snake too much, even a docile ball python, can over-stress the snake. This can lead to a slew of other health issues.

When To Not Handle Your Snake

There are a number of occasions when you should avoid handling your snake. Unless necessary, don’t handle your snake when the following apply:

A snake in shed is likely to be agitated or defensive because it’s vulnerable at this time. One of the final stages of shed, called ‘in blue’, also results in the snake’s vision being heavily impaired. Even the ever-docile ball python may act out of character during this stressful time as it can’t see.

Handling a snake just after it has fed can cause it to regurgitate its meal. This can be because of discomfort or anxiety.

A snake that has just fed will want to relax somewhere safe to digest its food. Disrupting this by handling the snake can make it feel unsafe. A response to this is to vomit so that it can move faster. This is a predator-avoidance tactic seen in many snakes.

Avoid handling your snake for a minimum of 48 hours after it has fed. Ideally, wait a full 72 hours.

If your snake does regurgitate, wait 2 weeks before attempting to feed it. The process of regurgitating damages the inside of the snake’s throat.

Signs a Ball Python Is Ready To Be Handled

You’ll know that your ball python is ready to be picked up when you see one or more of the following signs:

Of course, anyone taming down a defensive snake that is not used to people or handling may not see any of these signs.

Handling a Ball Python for The First Time

You shouldn’t handle a ball python until it has settled into its new home. Transport is an unsettling time for snakes. A ball python, shy as the species is, will need a quiet environment to feel secure.

Environmental stressors, such as chemical scents, loud noises, and flashing lights can stress a ball python. An anxious ball python will take poorly to behind handled. It may even feel as if it has to defend itself.

Washing your hands may not seem like a necessary step. However, a ball python will use its fine sense of smell in the search for food. The Journal of Ethology notes that ball pythons can pick prey chemicals apart from even powerful scents like cologne. Even trace amounts of a feeder animal’s scent on your hands can be picked up. This might trigger a feeding response.

Let The Snake Scent You

Your new ball python will need to be taught that you are not a threat. After the snake has had time to adjust to its new home, it’s time to begin acclimatizing the snake to your scent.

Let your hand rest inside the snake’s enclosure for a 2-3 minutes twice a day. Even if the snake doesn’t come up to your hand directly, your scent will linger on whatever you have touched. Eventually, the snake will learn you are not a threat. It may even begin to approach your hand.

Make Sure The Snake Is Aware Of You

Prior to opening the enclosure, ensure that the snake is aware of your presence. Approach the enclosure in the snake’s line of sight. You should be able to tell when a snake notices you as it will likely follow your movement.

Fast or sudden movements will startle your snake. Move in a calm, smooth manner as you approach and open the enclosure.

Pick Up The Snake

Pick up the snake using the mid-body hold. Reach into the enclosure from the side and not the top and smoothly pick up the snake. A snake hook can be useful for picking up an agitated snake unused to handling.

New snakes may not be used to being held. A snake that is just removed from its enclosure may also be curious about its new environment. Hold the snake by supporting it with two hands on the lower two-thirds of its body.

A ball python will likely wrap its tail around your wrist or forearm. This is not an aggressive action. Rather, this is the snake securing itself to its perch to avoid falling.

Move with The Snake

Although a ball python is usually placid and largely content to remain curled around your arm, it can still be active. When handling a more active snake, move with it so that it remains fully supported. Don’t attempt to stop it from moving by restraining it. A ball python will usually settle down within a few minutes of being picked up.

Returning The Snake To The Enclosure

Gently lower the snake back into its enclosure. Release it either by letting it slither from your hands or by placing it on the substrate.

It is perfectly normal to look at a defensive snake and second-guess the decision to handle it. However, if you are attempting to tame an aggressive ball python then the following tips will help:

Confidence is key when handling defensive ball pythons. Hesitation when picking up a snake, such as jerking your hand back and forth, can accidently provoke the snake into defending itself.

Smoothly pick up and support the snake. Once you are holding a snake there is little chance it will bite your hand, unless it thinks you’re food.

In order to handle an injured snake, you must be quick and gentle. Avoiding the injury, pick up the snake with your hands. Support the snake’s mass as best you can until you can place it on a surface.

The only reason you should handle an injured snake is to administer treatment, clean its enclosure, or take it to the vet. Handling a snake while it’s injured can over-stress it.

A reputable breeder will only sell a baby ball python once it is eating regularly and has shed at least once. This allows the breeder to ensure that it is healthy and growing.

Handling a baby ball python follows the same method as handling ball adult pythons. You just need to be more careful when picking it up.

A baby ball python may also be more defensive, as it hasn’t had as much time to become accustomed to being handled as an adult snake.

Ball pythons don’t seem to express any particular desire for being handled. Nor, as stated in Applied Animal Behavior Science, does handling appear to have a negative effect on pythons. Still, a snake will tell you when it doesn’t want to be handled by acting defensively. This is usually because the snake thinks you are a predator or a threat of some kind.

Picking up a Ball python for the first time can be intimidating for new owners. The key is confidence and the proper technique for lifting up a snake. The mid-body hold method is the best way to handle a ball python.

MLA Style: Carter, Lou. "How To Pick Up a Ball Python for The First Time" Snakes For Pets, (January 21, 2021), https://www.snakesforpets.com/how-to-pick-up-a-ball-python-for-the-first-time/.