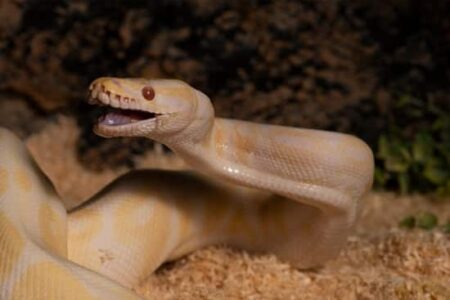 Ball pythons are calm and friendly pet snakes. But that doesn’t mean they never hiss at and bite their owners. Sometimes, royal pythons can be feisty indeed. As a beginner, you may not know how to tame an aggressive ball python, but your pet can be calmed down relatively easily.

Give your ball python time to get used to you. Then, check for any health issues. If the snake is healthy, improve your ball python handling technique. Remove pets, children, and unfamiliar people from your snake’s room, and handle your snake confidently. It’ll take time for your snake to familiarize itself with your scent using its vomeronasal organ.

If there’s an issue that causes your ball python to become nippy, it can be rectified through some simple modifications. We’ll look closely at all of the different factors that make your ball python agitated and irritable.

Why Is My Ball Python Aggressive?

How to Tame an Aggressive Ball Python

Use optimal handling techniques and non-threatening behavior to get the snake to trust you. Your snake mustn’t associate your scent with danger.

The main cause of aggression in ball pythons is that it doesn’t like how you handle it. Here are the most common reasons why:

According to AVS, reptiles are among the most badly treated pets, often due to a lack of understanding of their needs.

Incorrect handling will stress your snake and make it nippier. Use tools, such as the ones below, to make handling a pet ball python easier:

Once prepared, you can start trying to socialize your ball python. This sort of basic snake equipment will make the socialization process easier.

If the issue is related to health or cage aggression, it can usually be remedied by enriching the snake’s enclosure.

Hides and foliage (fake or real) are good examples. Both provide the snake with a place to hide, or will help to regulate the snake’s body temperature.

Paying more attention to your ball python’s enclosure will help to prevent health issues. If you regularly change its water and substrate, for example, you can prevent respiratory infection or scale rot.

When a ball python’s enclosure is optimal, and maintained correctly, the snake will likely be less likely to behave aggressively.

Prepare The Room for Snake Handling

Your room has to ‘feel’ safe or your ball python will become defensive. If there’s anything that could be perceived as a threat by a ball python, you have to remove it prior to handling.

Ideally, when you handle your snake, it should only be you in the room. Your snake will be defensive if it has to keep an eye on you and another person, or several other people.

Things that make noises aren’t as bad, because ball pythons don’t have a well-developed sense of hearing. It’s the movement that they dislike. Just make sure that the TV isn’t too loud, and there are no screaming kids.

What Makes a Ball Python Aggressive?

Ball python bites can be defensive or aggressive. Learn to tell the difference, and you will understand your snake’s behavior better:

When biting defensively, it will bite down, but immediately release. This is what they do if it knows that bumping you with its nose won’t work.

Don’t Reach into The Snake’s Cage

Snake hooks aren’t only a tool for experts or novices. Every owner should have one. They’re especially useful for handling aggressive snakes.

Cage aggression makes ball pythons defensive. It occurs because the snake is in a small, enclosed space, with a large creature coming towards it. Even if it knows your scent, it may interpret your actions as threatening.

When you reach in the cage with your hands, the snake feels threatened. But it won’t feel threatened by the hook. You can slip it underneath the snake from afar and lift it out. This will keep your ball python calm.

Once out of its cage, handling is usually easier. Your royal python won’t be as defensive as it sees an open, danger-free space. But it may still not be entirely comfortable, suggesting that the issue goes beyond cage aggression.

If so, don’t worry. Don’t handle the snake directly. Just spend some time with your ball python. Any time the snake tries to head somewhere that it shouldn’t, bring it back again with the snake hook.

Over time, it will come to understand that you aren’t a threat. It just takes time for a ball python, and all snakes, to become accustomed to you.

Get Your Ball Python Used to Your Smell

Snakes rely on their sense of smell. As they’re so close to the ground, they find it difficult to hunt using their sight. Their sense of hearing isn’t well developed. So, snakes determine whether you’re a friend or foe by smell.

When you first handle a snake, you may notice it trying to sniff you. It does so by flicking its tongue at you. Their tongue catches molecules from the air to enable them to pick up scents.

Let your ball python do this for as long as it shows an interest in doing so. When it’s done sniffing, don’t immediately pick it up. Teach it that when it smells your scent, you won’t immediately annoy or move it.

Put the Snake Back Using the Hook

It’s likely that your snake still isn’t entirely comfortable around you. Don’t aggravate the situation by putting it back in its enclosure with your hands.

Instead, use the hook to lift your snake up and return it. Putting your ball python back in its tank carefully with the hook prevents defensiveness.

The more frequently you repeat this process, the better the outcome will be. The snake will get used to you, and over time, it will allow you to handle it more freely. Just show patience by giving your ball python time to adjust.

If the snake keeps trying to bite you, then there’s something very wrong. Consult with a breeder or a vet for advice on ball python aggression.

Can I Handle My Ball Python Every Day?

Snakes are reptiles, and reptiles are not social mammals. When you handle ball pythons, they don’t bond or enjoy spending time with you. The best that you can hope for is that they learn to tolerate you.

That’s why you shouldn’t handle your pet ball python every day. Doing so causes snakes stress.

Instead, you should handle your snake twice a week at most. This is the level at which most ball pythons are comfortable. Any more and they will tell you to stop in the only way they know: by becoming aggressive.

That’s not to say that there are no ball pythons that can be handled more often. Perhaps, as your snake grows older and has lived with you for many years, you can. But as a novice owner, twice a week should be the limit.

You should also learn what a calm ball python looks like. One of the signs that your python is happy is that it’s curious. This indicates that it’s at ease with their environment and doesn’t feel threatened.

How does a ball python show that it’s calm? By flicking its tongue as it moves around. This indicates that it’s sniffing. When it’s sniffing, it’s exploring and gauging whether there are any threats around it. If it doesn’t become defensive, then this shows it doesn’t perceive any threats.

An aggressive ball python can be tamed. Make sure that the snake is healthy, create an enriching living environment, and adjust your own behavior. Over time, your snake will realize that you’re not a threat.