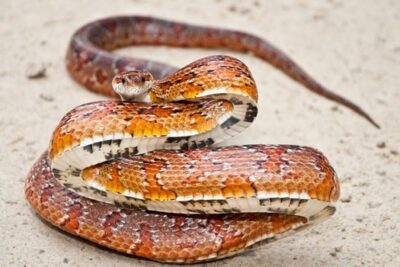 Corn snakes are often recommended to first-time snake owners because of their docile demeanor. However, a corn snake that is not yet used to being handled can become aggressive. Fortunately, there are some effective strategies for taming an aggressive corn snake.

Corn snakes can become aggressive when they feel stressed or threatened. They can also become more aggressive while feeding. Providing a comfortable enclosure, and moving slowly and carefully while feeding and handling your corn snake, will teach it to trust you.

Here we learn about the reasons why a corn snake may display aggressive behavior. Then we will talk about what to do to teach your corn snake to trust you and avoid being bitten. This includes how to house, handle, and feed your corn snake.

Corn snakes are not especially aggressive animals. They are calm and docile compared to other species, which makes them a popular pet.

However, there are times in which a corn snake may become more aggressive and difficult to handle. Understanding these situations and how to make sure your snake is comfortable will make life easier.

When Is a Corn Snake Aggressive?

When corn snakes are feeding, they may behave in a more aggressive way because they are in “strike at my prey” mode. This can lead to the snake accidentally biting its handler.

Corn snakes also become more irritable while they are shedding. Shedding is an uncomfortable experience for snakes, especially since they have limited vision throughout the process. It is best to leave your snake alone when it is shedding, lest it sees you as a threat.

The most common reason for corn snakes to become aggressive is if they feel threatened or stressed. Snakes are not naturally inclined to interact with humans. You are much bigger than a corn snake, and so it will see you as a threat. A provoked snake will try to flee, but if it is unable to flee it will turn aggressive and bite.

If a corn snake is provoked, its first instinct will be to run away. However, especially in captivity, the snake will not have any clear way to flee. This leads to the snake feeling cornered and threatened, and it may display aggressive behavior as a result.

According to the Coastal Plains Institute and Land Conservancy, the snake will raise up its upper body and open its mouth wide to display its teeth. This mimics the behavior of a venomous snake, such as a cobra.

If the threat does not immediately retreat, the snake will slowly slither towards the threat while hissing. The corn snake may also slightly flatten out its head in an imitation of a venomous snake’s hood.

This aggressive display is a bluff on the part of the snake. Corn snakes are not venomous and can only do so much to defend themselves. The behavior is an attempt to chase off a threat without actually needing to strike. Corn snakes will strike out with their teeth as a last resort. If at any point they get the chance to flee instead of fight, they will take it.

If your corn snake is displaying this behavior, do not attempt to handle it. Retreat and figure out what stressors are behind the issue.

How To House Corn Snakes

One of the main reasons a corn snake may turn aggressive is if it does not feel comfortable in its environment. Be sure to provide your corn snake with an appropriate enclosure, so it will not become stressed. Here are some things to consider while setting up your corn snake’s home:

Your corn snake will be happiest with a regular day/night cycle. You may be able to achieve this with the natural lighting in your house. If you know your snake will not get enough UV light on its own, attach a fluorescent light to the cage. Use a lamp timer to make sure the light will be on around ten hours each day, along with the natural daily rise and set of the sun.

Another way you can ensure that your corn snake feels comfortable in its new home is to provide it with places to hide. In the wild, snakes seek out logs and rocks to conceal themselves from predators. You can provide this for your snake in captivity with a plastic hide box or even a small log.

How To Handle Corn Snakes

Corn snakes have the instincts of wild animals. While these snakes can be socialized to be comfortable with the presence of humans, this requires careful work and regular handling.

When you first bring your corn snake home, give it some time to get used to its new surroundings. This should involve a few days in which no one tries to touch the snake.

Place the corn snake’s enclosure in a room where humans often come and go, so that your snake can get used to how humans smell and sound.

After this acclimation period, make sure to handle your snake at least once per week. The first few times you handle your snake, wear a pair of handling gloves, in case the snake is nervous and tries to bite you.

When you open the snake’s enclosure, move slowly and be gentle. Make a noise, such as saying hello, to let the snake know that you are there. A startled snake is more likely to become aggressive.

When you pick up the corn snake, support it with both hands so that it does not feel in danger of falling. However, do not hold it tightly. Allow the snake to freely explore your hands and arms. In time, this will teach the snake to trust you as a source of care and not a threat.

Children are not known for being gentle with their toys or pets. It is likely that an unsupervised child will mishandle a snake, grabbing or shaking it. This can lead to the snake feeling threatened and striking out in defense.

Especially if the snake is new to the home, never let a small child be alone with the snake. Always supervise children’s interactions with pet snakes and watch out for signs of aggression from the snake before it’s too late.

If you can, teach the child the importance of being slow and gentle with animals. Children do not always realize their potential to hurt other living creatures. If the snake is comfortable and happy, it will not be aggressive.

How To Feed Corn Snakes

According to the Animal Diversity Web, corn snakes only need to be fed once every few days. In the wild, these carnivorous snakes mainly feed on rodents and the occasional bird. Juvenile corn snakes will tackle easier prey such as lizards or tree frogs instead.

In captivity, corn snakes are fed thawed frozen rodents. The key aspect of feeding your corn snake is to make sure that the snake does not build an association between your hand and the arrival of food.

Often an “aggressive” snake is just a snake which is excited about the prospect of a meal. If the only time you open your snake’s enclosure is to feed it, and if you feed it using your hand, then the snake may learn to preemptively strike at your fingers.

One way to avoid this association is to feed your snake using tongs instead of placing the rodent directly into your hand. This way, your snake will not learn that your hand comes with food.

Corn snakes depend more on their sense of smell than their eyesight, but they will be able to tell the difference between hands and tongs. Washing your hands after feeding your snake will ensure that the smell of its prey will not linger on your fingers as well.

Another strategy you can use is moving the snake from its enclosure to a separate container in order to feed it. This way, the snake will learn to not expect its food to arrive when you reach into its enclosure.

You can use a snake hook to take your snake out of its regular enclosure and safely place it into a separate container, either another cage or a plastic tub. Then, while the snake is eating, you have the chance to clean out the snake’s enclosure if needed.

There are many tools that can help you create a safe environment for yourself and your corn snake. Here are some of our favorites.

These bite-resistant gloves are designed for animal handling. The gloves are made from thickened cowhide, durable and long-lasting against bites from snakes. Inside, the cotton lining provides soft comfort for your skin while also absorbing sweat and moisture for extra comfort.

AUOKER Animal Handling Gloves are over 23 inches long, protecting your entire arm from potential injury from an aggressive snake. These gloves are commonly used by reptile breeders and animal control staff for protection. They are lightweight and breathable, allowing you the flexibility to support the snake in your arms.

Wearing these gloves the first few times you handle your corn snake will protect your hands from an early nervous bite.

When moving your snake from its enclosure to another container, it is a good idea to use a snake hook to safely move it in case it gets aggressive. This V-Cheetong Extensible Snake Hook extends to a maximum of 53 inches, putting a safe amount of space between you and an aggressive corn snake.

The snake hook is made from a high-quality stainless steel and aluminum alloy material, so you don’t have to worry about a snake breaking it with a bite. The straps on the anti-skid handle allow you to connect the hook to your risk, keeping you from accidentally dropping the hook while you handle the snake.

At the other end of the device is a duckbilled shape hook which was designed with the comfort and safety of the snake in mind. The hook can support up to 4.5 pounds, perfect for a large snake.

A corn snake with a comfortable home is less likely to become aggressive. This Zilla Rock Den Hideout for Terrariums is a great way to give your snake some comforting furnishings in its enclosure to hide under.

The Zilla Rock Den is a realistic looking care, providing a cool, dark area for the snake to hide under. The snake can also climb on top of the rock to bask if it wishes. The den is made of a non-porous material which whisks away moisture, reducing the change of bacterial build-up.

Not only is the natural appearance of this rock den appealing for you to look at, it also connects well with a wild snake’s natural environment, allowing the corn snake to express its natural behaviors.

A happy corn snake is a relaxed, non-aggressive corn snake. Dedicate yourself to taking good care of your corn snake, and it’ll soon calm down.