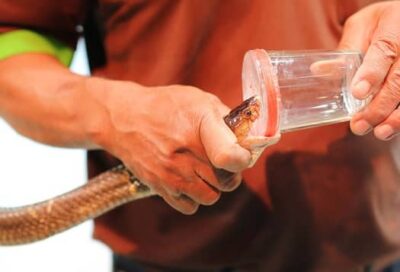 Most U.S. snakes aren’t venomous, but rattlesnakes, coral snakes, water moccasins (cottonmouths) and copperheads all have venom glands. A bite from a venomous snake can be dangerous, or even fatal. That’s why you need to know how to identify a venomous snake correctly.

Most, but not all, venomous snakes in America are pit vipers and have their characteristic physical traits. They have triangular heads, slit-like pupils, and heat-sensing “pits” near their nostrils. However, the coral snake is an elapid and looks completely different. They have red-yellow-black bands. There are also a number of ‘lookalike’ snakes.

Identifying venomous snakes by eyes doesn’t work for non-pit vipers, as is the case with the coral snake (family Elapidae). However, scale and color formations can enable you to tell between venomous and non-venomous. We’ll start by looking at the different venom-producing snakes in the U.S.

Which Venomous Snakes Live in the United States?

Venomous snakes inject venom into their prey when biting them. They’re often wrongly called “poisonous snakes.” Venom causes damage when injected into the skin, whereas poison caused harm when consumed.

While there are many species of snakes found in the U.S., all North American venomous snakes fall into one of four groups.

Rattlesnakes are pit vipers (of the subfamily Crotalinae).

There are currently 36 known species of rattlesnake, according to the Integrated Taxonomic Information System.

The only contiguous U.S. state free from native rattlesnakes is Rhode Island.

Though there are many species and subspecies of rattlesnakes in America, they’re all venomous, and have similar physical characteristics.

Of course, the “rattle” at the end of the tail is the most well-known feature. It comprises several hollow segments made of keratin. As they vibrate their tails, these segments collide together, making a rattling sound.

“Cottonmouth” is a common nickname for Agkistrodon piscivorus, another type of pit viper. They are also known as water moccasins or “gapers.” The nicknames of “gaper” and “cottonmouth” come from their threat display of gaping open-mouthed at predators.

Cottonmouth snakes are native to the southeastern United States. You won’t find a cottonmouth farther north than Virginia or farther west than Texas.

Cottonmouths typically live in the water, although they can move around on land. Their habitats include streams, marshes, swamps, and lakes.

Water moccasins aren’t the only type of snake you might find in the water, however. There are many non-venomous snakes that live in the waters of North America, such as the northern water snake (Nerodia sipedon).

Copperheads (Agkistrodon contortrix) belong to the same genus as cottonmouths. They are also native to the Southeastern states, although copperheads can be found farther north than cottonmouths.

According to the Department of Environmental Conservation, copperhead snakes have even been found in upstate New York. The “copperhead” name comes from their coppery, orange-brown coloring.

Although copperhead snakes and cottonmouth snakes belong to the same genus, they are distinct species.

Copperheads live in forests, rocky areas, and swamps. For this reason, they are sometimes known by the nickname, the “dry land moccasin.”

Coral snakes are the only venomous snakes in North America which are not vipers. They’re part of the family Elapidae.

Coral snakes are colorful, with red, yellow and black bands. There are dozens of different species of the coral snake, though only three are native to North America. These are the Texas coral snake, the Arizona coral snake, and the eastern (or common) coral snake.

Coral snakes reside in Arizona and New Mexico. Texas coral snakes have been reported in Texas, Louisiana, Arkansas, and Oklahoma.

How to Identify a Venomous Snake

So, now that you’re familiar with the 4 different types of venomous snake in the U.S., you need to know how to determine if a snake is venomous.

Unfortunately, the pupil-shape rule is not valid for 100% of North American venomous snakes. There is one exception: the coral snake. All 3 US-native species of coral snake are Elapids, and they have round pupils.

There are also some non-venomous snakes in the U.S. with slit pupils. Snakes in the family Boidae typically have slit pupils, and there are two species native to America: rubber boas and rosy boas.

So, eye shape alone isn’t a good enough indicator of a venomous snake.

There are two main elements to a snake’s skin: color and scale formation.

You may be wondering how to tell if a snake is poisonous by color. Unfortunately, it’s not that easy. Many species of venomous and non-venomous snakes in the U.S. have similar coloring.

For camouflage, many snakes are some variation of brown, grey, black or cream. Rattlesnakes and cottonmouths are examples. They’re often patterned (banded or blotched), but so are many other non-venomous species. Copperhead snakes are also banded, but in tan and coppery colors.

Coral snakes are brightly colored. They have bands of black, yellow and red. Unfortunately, so do many other snakes, such as kingsnakes. Here are the snakes confused with coral snakes.

To be sure it’s a coral snake, look at the color order. Coral snakes always have red bands touching yellow bands. Kingsnakes, on the other hand, have red touching black. Here’s a rhyme to help you remember: “Black and yellow, kill a fellow; red and black, venom lack.”

What’s the problem with this method? It requires you to flip the snake over, and examine its underside. You should never touch a snake that you find in the wild, especially if you’re unsure if it’s venomous.

There’s a reason pit vipers are named such. They have an extra sense: the ability to detect the body heat of nearby animals. To do this, they use deep heat-sensing pits that are located in their rostrum (snout). When you look at a pit viper’s face, you’ll see one facial pit near each nostril.

Most non-venomous species of snakes do not have these pits. Therefore, identifying a pit is a good way of telling whether you’ve encountered a venomous snake. However, there are some exceptions.

Coral snakes (Elapidae family) aren’t pit vipers, yet they are still highly venomous. For this reason, they’re the exception to the pit rule.

Some non-venomous snakes have heat-sensing pits, such as pythons. However, their pits are smaller and near their lips.

The only pythons found in the U.S. are Burmese pythons and African rock pythons, which have been established in Florida.

This rule applies well to pit vipers. Rattlesnakes, cottonmouths, and copperheads all have distinctly wide heads and slimmer necks. And most species of non-venomous snake have narrower heads. However, it’s not an accurate rule to follow, for these reasons:

All species of rattlesnake have a characteristic rattle. It appears as a hollow, segmented section at the end of the tail. When a rattlesnake feels threatened, it vibrates its tail, causing a rattling noise.

Of course, only rattlesnakes have rattles. Cottonmouths, copperheads, and coral snakes do not possess this unique anatomical structure. Also, some rattlesnakes also lack the ability to rattle their tails.

A rattlesnake can only rattle its tail when there are at least two segments that can collide. If a rattlesnake is too young to have grown a second segment, or if it’s lost its rattle to a predator, it won’t be able to rattle.

Some non-venomous snakes can also vibrate their tails, mimicking the sound of a rattlesnake. Such snakes include rat snakes (including corn snakes), kingsnakes, and gopher snakes.

They developed this ability as a defense mechanism, to fool predators into thinking they’re venomous. It’s a form of Bartesian mimicry. They have no rattle apparatus but vibrate their tails in the grass to mimic the sound.

Even venomous cottonmouths and copperheads can shake their tails when confronted, despite lacking a rattle.

Venomous snakes, such as vipers, have two large fangs for injecting venom. Non-venomous snakes have a series of much smaller teeth.

If a bite leaves two large, deep holes then fangs are probably responsible. A horseshoe of tiny, shallow holes indicates that the snake wasn’t venomous.

Fatalities are very rare. According to the CDC, about 5 people die from venomous snake bites per year in the USA.

If you do encounter an unfamiliar snake in the wild, always back away slowly. Snakes prefer to avoid confrontation with much larger humans.

MLA Style: Carter, Lou. “How to Determine if a Snake is Venomous” Snakes For Pets, (February 2, 2020), https://www.snakesforpets.com/how-to-tell-if-a-snake-is-venomous/.

APA Style: Carter, L. (February 2, 2020). How to Determine if a Snake is Venomous. Rabbit Care Tips. Retrieved July 6, 2022, from https://www.snakesforpets.com/how-to-tell-if-a-snake-is-venomous/