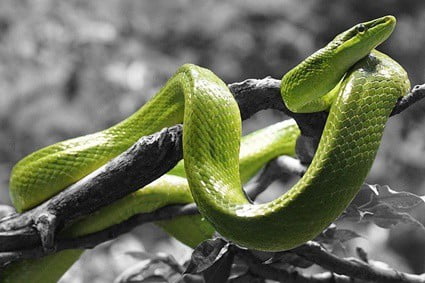 The best ways to sex snakes are probing and popping. Probing involves inserting a probe into the snake’s cloaca (genital cavity) and measuring the depth that the probe reaches. A greater depth suggests that the snake is male. Popping involves everting the snake’s hemipenes using your thumb. The absence of hemipenes indicates a female.

How to Tell if Your Snake is Male or Female

Both male and female snakes have a cloaca, which is located on the underside of the snake at the base of the tail. The cloaca serves two main purposes: snakes urinate and defecate out of it, and it contains their sexual organs.

When ready to mate, the male’s hemipenes pop out of the cloaca and he inserts them into the female. Here’s more info on how snakes reproduce.

Male and female cloacas look exactly the same from the outside. It’s only internally that the differences can be found, which makes like more difficult. To find out these differences, there are two main methods.

Both of these methods must only be attempted by experienced snake keepers. If you’ve never probed or popped a snake before, ask a veterinarian or herpetologist to help you.

Probing is the most intrusive way of sexing snakes, but also the most accurate. It requires the insertion of a thin, metal “sexing probe” into the snake’s cloaca, and measuring how deep it goes. A deeper probe indicates the presence of “hemipenis pockets,” meaning that the snake is male.

If the probe was able to be inserted further than the width of your snake, your snake is male. If the probe went down only two or three scales, it’s probably a female.

Cloacal popping involves manually trying to evert the snake’s hemipenes, using your thumb. If no hemipenes are present, your snake is female.

It sounds simple, but popping is rather tricky to get the hang of. It’s easy to apply too much pressure, not enough pressure, or pressure in the wrong place (too far from or close to the cloaca).

Many people mistakenly identify their snakes as female because they haven’t got the technique quite right.

Some species look almost identical regardless of gender, whereas others have major differences. Here are 3 different ways that you can get an idea of your snake’s gender by looking at it:

Because of the differences in male and female snake anatomy, their tails look slightly different. The difference can range from quite extreme (hognose snakes) to more subtle (ball pythons).

According to the Biological Journal of the Linnean Society, tapering of the tail is due to snakes’ reproductive anatomy. Their tails need to be long to have room to store their hemipenes. A snake’s tail begins at the cloaca. To examine its tail, you need to:

Pelvic spurs are small protruding pieces of bone that are located near a snake’s cloaca. They are the vestigial remnants of legs. Spurs are not present in all species but can be found in most species of boa and python.

In species with spurs, particularly boas, you can tell the gender by the size of these spurs. Boa constrictor males have much larger, more prominent spurs than females. Female boas sometimes lack spurs altogether.

However, in some species, it’s not possible to determine gender by examining the spurs. Some female ball pythons, for example, have spurs that are just as big as male snakes.

Female snakes tend to be larger than male snakes, according to Animal Behavior. Scientists believe that this is because larger females can grow larger eggs/babies. Larger juvenile snakes have higher rates of survival.

Ball pythons and boas have sexual size dimorphism. Though their babies are the same size, females tend to grow much larger during adulthood.

Measuring the snake might give you some idea of whether it’s male or female. This doesn’t work for every snake.

In some species of snake, such as colubrids, males and females are equal in size. In others, such as rattlesnakes, the males grow larger than females.