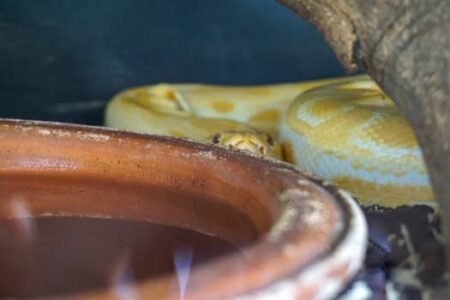 Your snake has been moving less, and not acting normal. It’s not eating its food, inactive, and doesn’t want to be handled. It would seem that something is seriously amiss with your pet snake.

‘Hibernating’ snakes are occasionally active to warm themselves. They will also react if you touch or pick them up, wrapping around your hand if they’re a constrictor. The same goes for sleeping snakes, which will look around as if startled when you wake them up. Dead snakes are completely cold and unresponsive.

A dead snake will hang limply from your hands if you hold them, and won’t react if you touch or hold them. If you think your snake might be dead, it would be wise to check with a vet. Whatever you do, don’t bury them or get rid of them straight away—they may still be alive.

Many snakes go through a process called ‘brumation,’ which is similar to hibernation. Brumation is a period of low activity during the winter.

Since snakes are cold-blooded, they need to conserve energy during winter months, and do so by not moving around as much as they usually would. However, this is different from hibernation. During this period, they will move around, just not as much.

Not only that, but not all snakes brumate. Only those that are native to colder regions, like timber rattlesnakes that live in the north, will do so.

So, a snake not moving isn’t necessarily a sign that it’s dead. Your pet snake could just be going through a period of low activity. But inactiveness is not the only sign that a snake is hibernating.

How to Tell If My Snake is Hibernating

A snake that wants to brumate will go to its hide for safety, and lie there for an extended period of time. It’ll be exceptionally still for most of the day. If it does move, it’ll be lethargic (i.e. slow and sluggish).

It won’t want to eat during this period. That’s because snakes need a source of warmth to be able to digest. If it can’t find somewhere warm, the bacteria inside its gut can’t break the food down. According to the Journal of Animal Physiology and Animal Nutrition, the undigested food sits in the intestinal tract and go rotten. This can result in regurgitation.

So, what triggers a snake to brumate? The key to brumation is a low temperature. When it gets too cold, snakes will stop being so active. The majority of snakes need one end of their tank to be between 80 and 90 degrees, although the temperature depends on the species of snake.

Check the temperature in the tank to see if this is what’s causing your snake to be so inactive. Warmth is also important for the snake’s health.

How to Tell If My Snake is Sleeping

It’s unclear how long snakes sleep for because sleeping often looks like hunting behavior. In the wild, many snakes are termed ‘ambush hunters’ because they’ll sit as still as they can, waiting for prey to pass them by.

They can sit still for days on end, but scientists aren’t sure exactly how much of that time is spent sleeping, and how much time is spent ‘hunting.’ The most effective way to tell if the snake is asleep is as follows:

A hibernating snake will still react in a similar way if you pick it up. But once you disturb it, your snake won’t be active when you’re done.

A dead snake won’t change color and start smelling bad. And sleeping or dead snakes don’t close their eyes because they don’t have eyelids to close. So, how can you tell if a snake is sleeping, hibernating, or dead?

How to Tell if a Snake is Sleeping or Dead

A dead snake will be unresponsive. It won’t react even when you do pick it up. Instead of moving and looking around, it’ll hang limply in your hands.

If it’s a constrictor, it won’t try and wrap around your hand for balance. It’ll likely be cold to the touch, although this isn’t unusual before it gets the chance to warm itself up in the basking area of the tank.

How Do I Know If My Snake is Dying?

There are many ways for a snake to die. They don’t always show the same signs when they’re close to death. It depends on what is wrong.

How Do I Know If My Snake is Dying of Old Age?

It’s rare for wild snakes to die of old age. However, if you’re keeping a snake as a pet, then it could reach the end of their natural lifespan. Its exact lifespan depends on the species:

For more information on the lifespan of snakes or others, we have a detailed guide that covers the subject in more depth. You can tell that a snake is getting old because of the following signs:

Bear in mind that these aren’t signs that the snake is dying, per se. However, they are signs of old age in snakes. If your snake is old enough to be close to dying of old age, it will be less of a shock when it dies.

In short, a hibernating snake will be responsive when you move close by or handle it. However, a dead snake will be completely unresponsive. If you’re unsure, you should always check with a veterinarian.

1 thought on “Is My Snake Dead or Hibernating? (Video Included)”