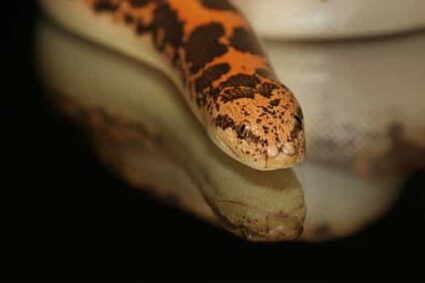 Breeding Kenyan sand boas is a complicated process, requiring a lot of planning and knowledge. It’s not as simple as putting two snakes together and hoping for a positive outcome.

To breed Kenyan sand boas, lower the temperature during winter. This encourages them to brumate, ready for breeding in the Spring. Introduce the male to the female once the temperature is back up. When you notice signs that the female is gravid, you can remove the male. She will give birth to live young 4-5 months later.

There’s less involved in breeding Kenyan sand boas than many other types of snakes. They’re live-bearing, so you won’t need an incubator, or to monitor the eggs as they develop. But there’s still a lot you can do to help the process go smoothly.

Kenyan sand boa morphs are determined by DNA: they are the result of genetic mutations. If you know which genes your Kenyan sand boas carry, you can predict what their offspring will look like.

Some morphs are dominant (heterozygous). This means that only one copy of the mutated allele is needed for the baby to express the morph.

Recessive (homozygous) morphs are only visible when the baby inherits 2 copies of the allele. Both the mother and father would need to be carrying it to produce babies that display that morph.

A snake can be a carrier of a recessive gene without expressing it. When this happens, the snake is “heterozygous for” or “het for” that trait.

For example, take a Kenyan sand boa that carries one copy of the albino gene. This snake would look normal, but be “het for albino”. If you bred it to an albino Kenyan sand boa (or another het albino), some of the babies would be albinos.

To predict what morphs your Kenyan sand boas might produce, you’ll need to know what genes they carry. If you don’t, the babies will be a surprise.

You can also create “designer morphs” (snakes expressing multiple traits) by combining certain genes. For example, it’s possible to make a snow stripe Kenyan sand boa. This would require 2 copies each of albino and anerythristic genes, plus one copy of the stripe gene.

When you’ve chosen which snakes you’d like to pair, check that they’re ready to breed. Males and females reach sexual maturity at different points.

A male Kenyan sand boa must be over 1 year old, and at least 75 grams in weight. The female must be at least 2 years old, and should weigh 300 grams or more. If your snakes are the right age, but too light, wait until they’ve gained weight before pairing them. To breed Kenyan sand boas, you will need:

Unlike when breeding ball pythons and other oviparous snakes, you won’t need an egg incubator. Kenyan sand boas are live-bearing: they give birth to babies, instead of laying eggs.

According to the Journal of Experimental Biology, boas and other live-bearing snakes transport vital nutrients to their offspring during development. They’re better able to protect their babies than egg-laying snakes.

Kenyan sand boa breeding season is during the spring. Most snakes will mate between March and May, and give birth in the summer or early fall. This breeding pattern is common among many species of snakes.

According to ILAR Journal, mating behavior is triggered by an increase in sex hormones and sex steroids. This change happens automatically when snakes come out of brumation (the reptilian equivalent of hibernation).

As pet Kenyan sand boas live indoors, their enclosures are usually maintained at the same temperature year-round. So, to trigger mating behavior, it’s essential to induce a ‘cool period’ which will encourage brumation.

Starting in December, lower the temperature of your Kenyan sand boas’ enclosures to 65-75 degrees Fahrenheit. This can be done all at once, or gradually over a couple of weeks.

During the cool period, your snakes will become less active. They’ll spend most of the time in their hides. You can still continue to offer food during this time, though they may not take it. This is normal.

At the end of February, gradually increase the temperature each day until it’s back to its normal level. Start feeding your snakes regularly, to help them gather their strength for breeding.

2) Check for Signs of Ovulation

In the spring, you may notice signs of ovulation in your female Kenyan sand boa. Ovulation refers to the time when her eggs have ripened, and are ready to be fertilized. Although Kenyan sand boas are live-bearing, they still develop eggs inside them. But these aren’t laid: instead, they develop into live young.

If your Kenyan sand boa is ovulating, her abdomen may take on a swollen appearance. It almost looks as if she’s suddenly swallowed a large meal. To the touch, it will feel firm and muscular. Ovulating Kenyan sand boas may also act more aggressive, and will often refuse food.

Around this time, you may also notice a change in your male Kenyan sand boa. If his enclosure is near the female’s, he will pick up the scent of her pheromones. This will cause him to roam around inside his enclosure, looking for her. He may also refuse food.

You won’t always see signs of ovulation. If you don’t, you can still pair the male with the female. Often, a female won’t ovulate until after she’s already mated. According to the Journal of Experimental Zoology, female reptiles can retain sperm in the oviduct until it’s needed.

3) Introduce the Male to the Female

During April, your female Kenyan sand boa will shed her skin. This is a sign that she’s ready to be introduced to the male. It’s up to you whether you put the male into the female’s enclosure, or the other way around.

For the first couple of hours, monitor your snakes carefully. Although it’s uncommon, male and female Kenyan sand boas can sometimes fight. In rare cases, the female may attempt to eat the male.

If you notice your snakes hissing, rearing up, or striking at each other, separate them. It’s not known exactly why this happens, but it’s a sign that they aren’t ready to mate.

If all is well, you can leave your snakes alone. When they’re ready to mate, the male will stimulate the female. He’ll climb on top of her, and start rubbing his chin along her back and sides.

If the male doesn’t seem interested in mating, it can help to introduce him to another male. They will naturally want to fight, and this can help them realise it’s breeding season. Separate them when they start fighting, and place the male that you want to breed back in with the female.

4) Look for Signs the Female is Gravid

You may also notice a change in her personality. Some gravid Kenyan sand boas can be more snippy and defensive than usual. This is most likely because they’re uncomfortable.

5) Separate the Male and the Female

Once you’re sure that the female is gravid, the male’s work is done. You can now remove him from the female’s enclosure (or vice versa).

If he wasn’t interested in feeding before, he will be now. You can put your male back onto his normal schedule.

At this point, all you have to do is keep your female Kenyan sand boa happy until she gives birth. Try not to disturb her too much, and keep handling to a minimum. Ensure that she always has a supply of fresh water.

Kenyan sand boas are usually extremely hungry while they’re gravid. They’re nourishing not only themselves, but their growing offspring. So, don’t hesitate to feed her more often than you usually would.

However, it’s a good idea to feed her smaller prey than usual. Very large meals could damage the developing young.

6) Remove the Babies Soon After Birth

In August or September, your Kenyan sand boa will shed her skin again. This is a sign that she’s about to give birth. This almost always happens during the night.

You’ll most likely wake up to a new litter of baby Kenyan sand boas exploring their mother’s enclosure. These snakes are precocial, so they are alert and mobile from birth. Each baby is around 8 inches long.

Kenyan sand boas are born inside a thin membrane. Most of the babies will pierce the sac and escape on their own. Underdeveloped or weak babies will struggle, and you may find that some of them don’t make it. Unfortunately, this is an inevitable part of snake breeding.

Remove all the babies straight away, and house them each in their own separate container. Be aware that some may be hiding amongst substrate or underneath vivarium accessories.

Some newborn Kenyan sand boas will be ready to eat immediately. But most newborns will wait until their first shed before they show interest in food. This will usually happen 1-2 weeks after birth.

Feed your newborn Kenyan sand boa a rodent that is the same width as the widest part of the snake. This will usually be a pinky mouse, but some larger babies can manage fuzzies.

Once your Kenyan sand boas have locked up, it’s a matter of time before the female gives birth. However, the exact length of time can appear to vary quite dramatically.

This is because it’s difficult to tell when a Kenyan sand boa is ovulating. She may ovulate before pairing with the male, or after (storing the sperm until it’s needed). And once she’s gravid, she may not show signs straight away.

On average, Kenyan sand boa pregnancies last between 4-5 months. But to be on the safe side, ensure you have the babies’ food and enclosures ready long before this time. You don’t want to be scrambling to acquire supplies if your snake gives birth earlier than anticipated.

If more than 6 months have passed, and your female has not given birth, she’s probably not gravid. Try again next year and see if you have better luck.

How Many Babies Do Kenyan Sand Boas Have?

Snakes can have a surprisingly large number of babies per litter. This is because in the wild, tiny snakes are often picked off by predators. There’s safety in numbers – having more babies increases the chance that some will survive to adulthood.

Young Kenyan sand boas, that have never given birth before, tend to have fewer babies. Your snake’s very first litter will probably be on the smaller side (5-12). But larger, older and more experienced females may have 18-25 babies per season.

Why Did My Kenyan Sand Boa Pass Slugs?

Slugs are unfertilized eggs. They are yellow to orange, and may be round or ovoid in shape. It’s normal for a Kenyan sand boa to pass a few slugs while giving birth to a litter. Not all of the eggs will be fertilized when a snake ovulates.

You’ll probably find that your Kenyan sand boa eats the slugs after passing them. This is completely normal. She knows that they aren’t going to develop, so she consumes them to regain lost nutrients.

It’s also possible for a Kenyan sand boa to pass an entire clutch of slugs, containing no healthy babies. This happens when the snake ovulates, but no sperm come into contact with the eggs.

If this happens to you, it may be because the male wasn’t mature enough to breed. Next year, when both snakes are bigger, you’ll likely have more success.