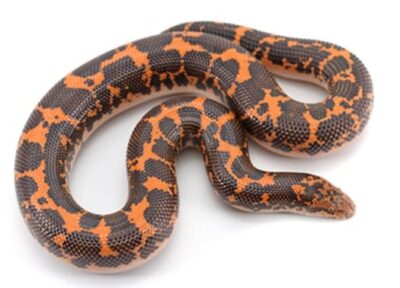 Kenyan sand boas are one of the easier snakes to breed in captivity. This is because females are viviparous, meaning they give live birth. Breeders don’t have to incubate eggs for months, and within a few weeks of being born, baby Kenyan sand boas can be sold. This species is also one of the smallest boas in the world, so feeding them is not overly expensive.

Normal Kenyan sand boas are found with dark brown saddles, dusky orange scales, and a pale white belly. A line-bred morph has resulted in the nuclear morph, where these natural colors are incredibly bright and vivid. Other morphs alter the saddles of this snake. The stripe morph, the splash, and the Dodoma morph all alter, or remove, the saddles. Crossbreeding Kenyan sand boa morphs has resulted in an attractive, although relatively small, range of affordable snakes.

These snakes are native to parts of Northern Africa. The first specimens were imported from Kenya to the U.S. in the 1970s. Today, there are specific laws that prevent wild-caught snakes from being exported. All Kenyan sand boas in the U.S. will almost certainly be captive-bred snakes. When bred in captivity, Kenyan sand boas make good pets.

A normal Kenyan sand boa is a snake without morphs, called a wild-type. It is thick-bodied and quite small. Its belly scales are pale, usually white or cream-colored. The rest of its body, from the blunt head to the stubby tail, is usually orange or yellow with dark brown saddles.

This snake’s pattern is unique. No two snakes have an identical pattern. Kenyan sand boa morphs affect only the snake’s coloring and patterns. Physical attributes are not altered in any way.

Albinism is a naturally occurring morph seen in the wild, and not just in snakes like the Kenyan sand boa. This is a recessive trait, meaning that both parents must carry the gene for albinism for a baby to be albino. As said in the Journal of Heredity, this gene results in an animal being unable to produce black pigments.

Albinism in Kenyan sand boas presents itself as yellow, orange, cream, and pinkish-lavender scales and saddles. Pigments vary in saturation and hue depending on parentage.

Albino Kenyan sand boas are quite popular and readily available. As such, it is one of the cheapest morphs. The price, though, is dependent on how vivid the colors present and the attractiveness of the pattern.

Kenyan sand boa morphs are often interbred for how beautifully they complement each other. This is shown well by the stunning albino splash paradox morph. This is actually three individual morphs bred into a single snake. The albino morph, the paradox morph, and the splash morph.

The splash morph results in aberrant saddles. Meaning that the bottom third of the snake will be blank of saddles. The paradox morph, sometimes also called the pied morph or piebald morph, results in random black speckles and splotches.

Curiously, an albino Kenyan sand boa with the paradox morph will have dark speckles, even if the rest of its body lacks pigment. Making it, really, a paradox. Which is what is so attractive about this beautiful morph.

There were no Kenyan sand boas with this morph for sale at the time of writing. We imagine they would sell for a few hundred dollars.

There is little information about the calico morph, however, pictures are surfacing of snakes with a surplus of orange, white, and black splotches. As the name suggests, these markings are similar to those of the calico cat.

The calico morph is beautiful in how very random the saddles appear. Many of the splotches seem to overlap and blend into each other, creating quite a unique looking snake.

The nuclear Kenyan sand boa morph is actually similar to wild-type morphs. It differs in that the nuclear morph has much brighter colors. The orange scales are incredibly stark against the black saddles, giving a molten lava glow to the snake.

This is a line-bred trait. Nuclear morphs pop up at random. As these are technically a normal morph, snakes can be bought for a cheaper price most of the time. A snake with particularly vivid colors may increase the cost.

Anerythrism is the opposite of albinism, and it is also a recessive trait. An anerythristic Kenyan sand boa will have no yellow or orange pigment. This results in a white or grey snake with dark brown or black saddles.

This is a popular morph due to how well the dark and light scales complement each other. Anerythristic Kenyan sand boas can be found frequently and for an affordable price.

Snow morphs are a result of crossbreeding an albino morph with an anerythristic morph. A snow Kenyan sand boa will be almost pure white with very pale tan or yellow saddles. Occasionally, the saddles will have a pale pink hue too. A stunning feature of this morph is their dark red eyes, almost ruby-like in their luminescence.

A highly sought after recessive morph means a steeper price. Still, snow Kenyan sand boas can be found for a much lower price than snows of the more popular pet snakes. Snow ball pythons go for upwards of $500.

This is a very new morph that resembles hypomelanism. Breeders are working with this new trait, of white scales and pale, reddish-brown saddles, to refine it into a true morph that can be replicated. Obviously, breeders aren’t ready to sell any of these beauties quite yet.

The stripe morph replaces the blotch-like saddles of the snake with a single uneven stripe along the spine. This morph is often used to enhance other morphs. For this reason, stripe morphs are widely available.

In normal colors, a stripe morph produces a brown-bodied Kenyan sand boa with a vivid orange stripe running from nose to tail. Cost will fluctuate depending on how clean the colors are and how bright the stripe is.

Pretty as a picture is the Dodoma Kenyan sand boa morph. This trait alters the snake’s saddles. Instead of randomly-shaped blotches, the saddles become circular.

This trait is also one that developed naturally in the wild. An isolated population of Kenyan sand boas was discovered in Dodoma, the capital of Tanzania. These snakes had patterns that were distinctly different from those of the main Kenyan sand boa population. One lot of these reptiles were imported to the U.S. before the exportation of wild-caught snakes was made illegal in Tanzania.

The Dodoma morph would have developed due to geographic and genetic isolation. A common occurrence when a population of one species becomes isolated from the rest. As explained in The American Naturalist, isolated populations diversify for two reasons.

Anerythristic stripe Kenyan sand boas are beautiful, dark snakes with a pale stripe along the spine. These traits often result in a dark brown, grey, or black snake with a pale grey stripe.

It’s always interesting to see how morphs will interact. In this case, the dominant trait (stripe morph) blends beautifully with a recessive trait (anerythristic morph).

No one can seem to identify if this is a recessive, dominant, or line bred trait. As such, this morph is quite rare and demands a higher price.

Supposedly, this morph was actually a result of crossbreeding a Kenyan sand boa, Gongylophis colubrinus, with a closely-related subspecies, Eryx colubrinus rufescens. This resulted in the rufescens morph. There is some debate about whether this is a true morph or a hybrid animal.

Another morph created using the stripe gene is the snow stripe Kenyan sand boa morph. The characteristic pure white color of a snow looks like a streak of lighting running down the spine of this pale pinkish-lavender snake.

Snow morphs are quite rare and pricey. Any morph made by breeding a snow will therefore also be pricey. We couldn’t find any snow stripe Kenyan sand boas available. Still, we expect one would cost a few hundred dollars.

Another lesson in contradiction is the albino paradox Kenyan sand boa morph. A lack of pigment is made ever-more interesting by random speckles and splotches of pigment. Pale pinks and sunset orange scales are interrupted by ink-like speckles of black. A very visually interesting morph.

Paradox morphs can have very few speckles, or very many. The attractiveness of the speckles may determine the price.

Similar to the albino paradox morph is the snow paradox morph. Only, instead of shades of orange and yellow the snake is pale pink and white. This coloring really makes the characteristic paradox speckles stand out even more.

The snow splash paradox Kenyan sand boa is another triple morph snake. To get this morph, a breeder must crossbreed a snow splash with a snow paradox. Curiously, the splash morph only ever disrupts saddling on the lower third of a snake’s body.

We were only able to find prices for paradox snow morphs, which cost $200. We imagine that a triple morph such as a snow slash paradox would cost anywhere between $250 -$350.

The albino stripe morph presents as a single jagged white, cream, yellow, or orange stripe running down the length of the snake’s spine. The rest of its body is a very pale pink or cream.

A yellow snow Kenyan sand boa has white scales and beautiful yellow saddles. There isn’t much information available about the yellow snow morph, although it appears to be the result of albino morphs crossbreeding with snow morphs.

Unlike the other morphs, the yellow snow gene is polygenic. Meaning that other genes influence how this morph manifests. The yellow scales may appear brighter or duller depending on the genetic history the snake inherits.

Where To Find Kenyan Sand Boas

This is a wonderful snake that is perfect for beginners and has an attractive range of morphs. As such, it is widely bred and readily available. More attractive, exotic morphs often sell quickly or have waiting lists. Be sure to do your research and purchase from a reputable breeder.

Kenyan sand boa breeders have carefully curated a stunning array of morphs. These morphs are often interbred to enhance one another, which usually results in a higher price. On a whole, Kenyan sand boa morphs are on the more affordable side. Even the more exotic snows and anerythristic stripes can be purchased for a few hundred dollars.