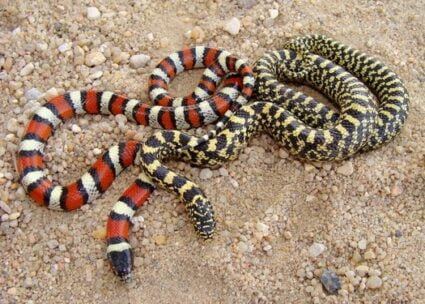 The term ‘kingsnake’ refers to any snake in the genus Lampropeltis. This includes milk snakes, which belong to the species Lampropeltis triangulum. So, all milk snakes are a type of kingsnake. Milk snakes and kingsnakes are smooth-scaled and shiny, and relatively small (2 to 6 feet long). Most species have brightly colored rings or bands.

There are dozens of different species of kingsnake, and subspecies of milk snake. They can vary widely in appearance. Milk snakes and kingsnakes can also interbreed, creating hybrid snakes.

Are Kingsnakes and Milk Snakes the Same?

Kingsnakes (Lampropeltis sp.) are non-venomous colubrid snakes, found throughout the Americas. They’re harmless to humans, and kill their prey through constriction. They’re found as far north as Canada, and as far south as Ecuador in South America.

There isn’t just one type of kingsnake. There are over 45 different species and subspecies, found in different areas. They vary in appearance, though some of them look extremely similar.

Some of these are known as kingsnakes, whereas others are called milk snakes. A milk snake is a species of kingsnake, known by the scientific name Lampropeltis triangulum.

There are many subspecies of milk snake, some of which have vastly different colors and patterns. Some herpetologists argue that they should be reclassified into several different species, but this hasn’t happened yet.

Kingsnakes are so named because they are ophiophages. This means that they eat other snakes. They have even been known to eat venomous snakes, such as rattlesnakes. According to Zoology, kingsnakes can swallow snakes that are longer than them, by bending their prey’s spine.

Milk snakes, being a type of kingsnake, also eat other snakes. They get their name from the old myth that they can drink milk from cows’ udders. This is impossible due to their sharp teeth.

Every apple is a fruit, but not every fruit is an apple. In the same way, every milk snake is a kingsnake, but not all kingsnakes are milk snakes.

What makes matters confusing is that scientists can change their minds about which snakes belong to which species. Some species of kingsnake look and behave so similarly to milk snakes that it’s not easy to tell.

For example, the scarlet kingsnake (Lampropeltis elapsoides) used to be classified as a subspecies of milk snake. Some sources still refer to them by their old name, Lampropeltis triangulum elapsoides.

To add to the confusion, kingsnakes and milk snakes can interbreed. They are genetically similar enough, and most of their geographical range overlaps. So, sometimes, hybrids are found that are mistaken for new or undiscovered species.

Because there are so many different types of kingsnake and milk snake, their appearance can differ drastically.

Kingsnakes’ scientific name, Lampropeltis, means ‘shiny shield’ in Greek. This is in reference to their smooth, unkeeled scales, which make them look glossy.

Being active hunters, kingsnakes and milk snakes are lightweight and slim-bodied. They grow to 2-6 feet, and rarely weigh more than 3 pounds as adults. This allows them to move quickly and chase their prey.

Most kinds of kingsnake and milk snake are banded. This means that they have colored horizontal rings going down their body, from head to tail. Their colors can range from whitish-yellow to red, brown, black, and gray. The most common species of kingsnake are:

There are two dozen subspecies of milk snake. Most of them are light to dark red, with some variation of black and white/yellow markings. These can take the shape of bands or ‘saddles’.

Through selective breeding, a variety of color and pattern variations (known as ‘morphs’) have been created. For example, albino milk snakes lack any black markings. These are uncommon in the wild.

What Are the Subspecies of Milk Snakes?

All milk snakes are the same species – Lampropeltis triangulum. But they are split into 24 distinct subspecies, all of which have their own unique appearance. Like breeds of dog, they aren’t different enough to be considered separate species.

The reason there are so many subspecies is that milk snakes are found throughout a wide geographic area. Their range spans millions of square miles. Natural selection has resulted in milk snakes looking different in some areas than others.

All subspecies of milk snake share some similarities. They are all shiny in appearance, with smooth scales and small, tapered heads for burrowing. They are lightweight and fast-moving snakes.

How to Identify a Milk Snake vs Kingsnake

Certain species of milk snake and kingsnake are easy to identify visually. For example, the California kingsnake, with its distinct black and white bands, is unique in its appearance.

But many species of milk snake and kingsnake have a similar color and pattern. They are red, with black and white or yellow bands. So, how do you tell a kingsnake and milk snake apart?

The two most commonly confused species are the scarlet kingsnake and the common milk snake. A wild kingsnake or milk snake can sometimes be identified by its location.

For example, if the snake was found in Nebraska, it’s almost certainly a milk snake. Scarlet kingsnakes aren’t found further west than Louisiana.

If there’s more than one type of milk snake and kingsnake native to your state, it might be trickier. Even experienced herpetologists sometimes struggle to tell the different types of kingsnake and milk snake apart.

Because neither milk snakes nor kingsnakes are venomous, the exact species you’ve found is of little importance. But it’s crucial that you don’t confuse a wild kingsnake or milk snake with a venomous coral snake.

The coral snakes found in the U.S. are also red, with black and yellow or cream rings. The crucial difference is the order of the colors. If red touches yellow, it’s a coral snake. If red touches black, it’s a harmless kingsnake or milk snake.

Coral snakes found outside of the U.S. may have any variation of colors. If you’re unsure, it’s best to stay away.

Can You Get a Milk Snake King Snake Hybrid?

Being closely related, it is possible for a milk snake to breed with a kingsnake. This has been observed both in captivity and in nature.

Because milk snakes and kingsnakes belong to the same genus, they share most of the same DNA. Their differences are down to minor genetic variations, which don’t prevent them from reproducing.

The more similar the species, the more likely they are to interbreed. This is because they are more likely to recognize each other as a potential mate.

According to PLoS One, the geographical range of milk snakes and kingsnakes can overlap. Scarlet kingsnakes and milk snakes, for example, share a wide area of the central United States. They may mate if they encounter one another, producing a milk snake kingsnake hybrid.

If introduced in a captive environment, any two species of kingsnake and milk snake may breed. Kingsnakes and milk snakes can also reproduce with other species in the Colubridae family. For example, California kingsnakes have been known to breed with corn snakes.

Kingsnakes and milk snakes can’t breed with venomous coral snakes. Even though they are similarly colored, they are too genetically different to produce offspring. Coral snakes belong to a different family (Elapidae).

Both milk snakes and kingsnakes are common pets. There are several reasons why they are considered good snakes to keep in captivity:

Whether a kingsnake or a milk snake makes a better pet is a matter of personal preference. But if you’re new to keeping snakes, you may prefer a milk snake.

Milk snakes remain smaller than most other kingsnakes, and are therefore easier to handle. And because they stay small, it costs less to heat their enclosure, and to feed them. They’ll eat mice throughout their life, whereas some larger kingsnakes may require rats.

Because they’re commonly bred in captivity, milk snakes aren’t expensive to buy. They come in a wide range of visually striking color morphs.

MLA Style: Carter, Lou. "What is the Difference Between Milk Snakes and Kingsnakes?" Snakes For Pets, (January 21, 2021), https://www.snakesforpets.com/milk-snakes-vs-kingsnakes/.

APA Style: Carter, L. (January 21, 2021). What is the Difference Between Milk Snakes and Kingsnakes?. Snakes For Pets. Retrieved January 21, 2021, from https://www.snakesforpets.com/milk-snakes-vs-kingsnakes/