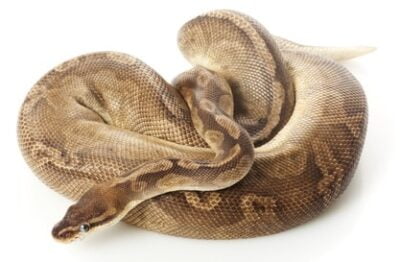 The newer a ball python morph is, the rarer (and more expensive) it will be. The most expensive ball python ever sold was a lavender albino for $40,000. These snakes now sell for $250 each, as they’re more common.

What Is a Ball Python Morph?

Normal ball pythons are black, with brown blotches and dark brown eyes. This is a ball python’s natural coloration, and that you’d see in the wild. But captive ball pythons can look extremely different.

A morph is a genetic mutation that affects how a ball python looks. It can alter the snake’s color, pattern, or both. Some morphs can also change a ball python’s anatomy, such as the scaleless morph.

Certain ball python morphs have been around for decades, and are common. An example is the albino ball python. Albinos are white with yellow markings, and red eyes.

Rare ball python morphs are created when breeders come across a brand new gene. This can happen in one of two ways:

Ball python morphs don’t survive in the wild, because they stand out and are targeted by predators. But in captivity, their unique appearance makes them great display animals.

The first specimens of a new ball python morph can sell for many thousands of dollars. If the trait is recessive, it’s harder to reproduce, and therefore rarer.

How Much Do Ball Python Morphs Cost?

Normal ball pythons can sell for less than $40 each. A ball python morph will always cost more to buy than a normal. But some morphs are much more expensive than others, due to their rarity.

The cheapest ball python morphs are the most common, and have only subtle effects on a snake’s appearance.

For example, pastel ball pythons look similar to normal ball pythons. The main difference is that the yellow pigmentation is brighter, and they have green eyes instead of brown. Pastel is one of the most affordable ball python morphs, starting at $60.

A ball python can also be a mixture of several morphs at once. Snakes with more than one expressed trait are pricier than single morphs, and can cost thousands of dollars.

The rarest and most expensive ball pythons are those that contain newly discovered genes. Brand-new morphs can cost tens of thousands of dollars, but the price drops as they get more common.

What Is the Rarest Ball Python Morph?

Breeders often take a long time to perfect new morphs. They take time to figure out how the gene works, and perfect the morph’s appearance through selective breeding. It may be years before a new morph becomes widely available to the public.

Let’s take a look at some of the rarest and most expensive ball python morphs currently on the market.

IRES Reptiles, a breeder from the Netherlands, hatched the first two stranger ball pythons by accident in 2012. They were the product of a normal-looking female clown ball python and a male butter pastel.

After several years of experimentation, the breeder proved that the stranger morph was genetic. The first stranger ball pythons were released to the public in 2016, so it’s one of the newest morphs. Being so new, it’s also one of the rarest.

Stranger ball pythons have a deep black body color, with brown upside-down teardrop shapes along the sides. There is a brown blushing between each teardrop. The most impressive feature of this morph is a bright tan broken stripe that runs down the spine.

As the stranger ball python morph was developed so recently, it’s very rare. Only a handful of breeders worldwide are working with the stranger gene, and most aren’t in the U.S.

A stranger ball python will currently set you back at least €7,000 ($7,800), not including shipping fees. Stranger ball pythons that also express other morph genes (polymorphic) are more expensive – up to $20,000.

The sunset ball python was first developed by BHB Reptiles, a breeder based in Michigan. It was the result of years of careful selective breeding.

As their name suggests, sunset ball pythons are deep red-orange in color. The red is deepest along the spine, and fades to orange and yellow on the sides. It looks as if someone has painted a sunset right onto the snake’s scales.

The underlying pattern is visible, but less defined, as if the color has masked it. The sunset morph can be combined with various pattern morphs, such as normal, spider and clown. Polymorphic sunset ball pythons are often more expensive than normals.

The reddish color that the sunset morph creates is unique. Browns, yellows, whites, and blacks are much more common among ball pythons. That’s why sunset ball pythons are so sought after.

But the sunset gene is tricky to work with, and the resulting snakes don’t always look perfect. The most visually impressive sunset ball pythons can cost up to $20,000 each. Less dramatic sunsets can sell for as little as $4,000.

The monsoon ball python gene creates one of the most visually striking morphs available. It affects the snake’s pattern, rather than its color.

First bred in 2015 by Dave Green Reptiles, monsoon ball pythons came from a random lucky genetic mutation. The morph was discovered to be recessive, meaning it can be bred from parents that each carries the gene.

Monsoon ball pythons were so named because their pattern looks like raindrops on a window. They have hundreds of intricate speckles or splashes covering their bodies. It makes them stunning to look at, and almost not like a ball python at all.

Normal monsoons have tan speckles on a deep brown background color. However, the monsoon gene can be combined with color morphs to create a variety of unique looking snakes.

Expect to pay a minimum of $12,000 if you want a monsoon ball python. Even a normal-looking ball python that carries the monsoon gene will set you back at least $4,000.

The scaleless ball python is one of the most impressive ball python morphs ever created. This is because it doesn’t affect color or pattern, but rather the anatomy of the snake.

Most ball pythons have rigid scales all over their bodies, including long scutes on their bellies. But a scaleless ball python has no scales at all, except ocular scales (covering its eyes). The rest of its body is covered in smooth skin.

According to the Journal of the Royal Society, scales help snakes to move and protect their skin from wear. Scaleless ball pythons move and shed like a normal ball python, but they are more vulnerable to trauma.

BHB Reptiles reportedly received an offer of $125,000 for the first scaleless hatchling. Since then, the gene has been released to other breeders, so scaleless ball pythons are becoming more common. But they’re still one of the rarest and most sought after ball python morphs.

Today, you can expect to pay a minimum of $2,000 for a scaleless ball python. Specimens with additional color and pattern morphs may sell for over $10,000 each.

Paradox ball pythons aren’t technically morphs, because they occur randomly – you can’t selectively breed them. However, they are definitely worth mentioning, because of how rare they are.

A paradox ball python is a snake that has mismatched markings or colors that shouldn’t be genetically possible.

No-one knows exactly why “paradoxing” occurs. But it’s thought to be the result of a phenomenon called chimerism. This is when two embryos, each with DNA for a different morph, fuse together.

The resulting snake has patches of skin cells that contain DNA for different color morphs. They are two things at once (for example, both normal and albino). A paradox ball python may even have two different eye colors.

According to Immunologic Research, chimerism isn’t unique to snakes; it can affect humans and other animals too. What’s clear is that it’s extremely rare, no matter which species it affects.

Some paradox ball pythons may only have one tiny patch of a different color. These may sell for under $1000. But paradoxes with large patches of ‘impossible’ colors cost up to $30,000.

What Is the Most Expensive Ball Python Morph?

When a breeder first discovers a gene for a new ball python morph, it will initially be expensive. This is because it’s so rare. For example, BHB Reptiles reportedly received an offer of $125,000 for the first scaleless ball python.

As other breeders begin to work with the genes of a new morph, it becomes more common. The more ball pythons of that morph are available, the more affordable these specimens become.

If the morph is dominant, it’s easier to reproduce, and becomes common more quickly. If it’s recessive, it will be harder to breed, so the process takes longer to happen.

Because scaleless ball pythons are becoming more common, you can buy one now for as little as $2000. This price will continue dropping further as more and more breeders start to work with the gene.

So, which ball python morph is the most expensive? The answer is whichever morph is the newest at any given time. According to Forbes, one of the first lavender albino ball pythons sold for $40,000. But now, they’re available for $250 each.

Stranger and monsoon ball pythons are the most expensive true morphs on the market. However, this will undoubtedly change as new and exciting ball python morphs are bred. The only ball pythons that will always remain expensive are paradox/chimera ball pythons. Unless someone finds a way of deliberately breeding them, they will always be rare.