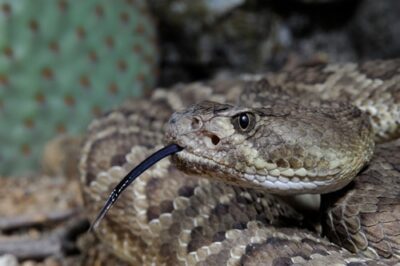 Rattlesnakes are known for their unique defensive behavior and deadly venom. California is home to a variety of the pit viper family. One of which, the western diamondback, is responsible for the second-most fatal snake bites in the U.S.

Of all the venomous snakes in California, most have working anti-venoms that will negate the toxic effects. Untreated bites from all of these snakes can result in permanent damage, or even death.

The western diamondback, Crotalus atrox, is a pit viper that lives in dry, arid habitats. This is considered to be the most dangerous venomous snake in California due to its large size, potent venom, and aggressive attitude. It is responsible for the second-most fatal snake bites in the U.S.

This snake’s venom is hemotoxic and targets the blood, causing hemorrhaging. This venom is injected by half-inch long fangs. A study published in Toxicon sampled venom from western diamondbacks of different ages. The researchers found that the venom of a young snake is far more lethal than that of an adult snake.

This snake is heavy-bodied and has a triangular head. It has dark lines on its face, running diagonally from its eyes to its jaw, and heat-sensing pits behind its nostrils.

As the name implies, it has dark diamond-shaped patterns along its spine. Its tail also has stark black and white bands on its tail, just before the rattle. The rest of the snake will usually be a mixture of grey, brown, off-white, pale red, pale pink, or yellow.

For pit vipers, it is on the larger side. Most western diamondbacks will grow between 3-5 feet long. Although some specimens have reached 7 feet.

This group of snakes have potent venom. This venom is a blend of neurotoxins, hemotoxins, and myotoxins. Chemical compositions have been noted to change between subspecies, and between populations.

As there are three subspecies, there will be some minor divergence in appearance. On a whole, they do share some common visual traits.

All northern pacific rattlesnakes will have circular saddles on the top two-thirds of their bodies. On the lower third of their bodies, these saddles become lateral bands that continue to the rattle. These patterns are usually in shades of dark brown, with lighter brown or tan scales on the rest of the body. Colors of the banding are usually more pigmented and brighter.

Northern pacific rattlesnakes will also have flat, triangular heads and heavy, stocky bodies. Adult sizes vary between 3-5 feet in length depending on the subspecies.

This snake brumates in winter. As stated in the Biological Journal of the Linnean Society, groups of up to 180 individual snakes have been recorded to brumate together in dens.

Not much is known about its venom. It has the potential to be lethal if left untreated, and can result in amputation due to necrosis. Symptoms are localized to the bite site and include pain, bruising, swelling, blistering, and necrosis. In severe cases of envenomation, other symptoms may include vomiting, abdominal pain, nausea, headache, and fainting.

On average, this snake grows to 3-4 feet in length. Typical of pit vipers, this snake has a triangular head with heat-sensing pits behind its nostrils. Its dorsal scales are keeled and speckled, hence the name.

Coloration varies greatly across the southwestern speckled rattlesnake. A snake can have any combination of grey, brown, black, red, yellow, white, and pink scales. Most snakes will have banding patterns broken by darker or lighter speckles. The banding towards the tail is occasionally brighter in color. Many say that an individual’s colorings will resemble the rocks of its habitat.

The Mojave rattlesnake, Crotalus scutulatus, is considered the deadliest pit viper not only in California, but in the world. This snake prefers open, arid habitats sparse of vegetation asides from grasses, scrub brushes, and cacti. Its unique venom is considered vital to researching how venom works and evolves, and how to best develop anti-venoms.

This snake has neurotoxic and hemotoxic venom. It is considered one of the most potent and deadly venoms in the world. Fortunately, a highly effective anti-venom is available. Symptoms of a Mojave rattlesnake’s bite are intense pain, swelling, nausea, vomiting, and blistering. This venom targets red blood cells, which can also put the victim into shock and lead to organ damage. An untreated envenomation is lethal.

There is a degree of misconception about how big Mojave rattlesnakes grow. In reality, an adult will usually grow between 3-4 feet long. One will rarely grow larger. This snake has heat-sensing pits between its eyes and nose, and has a triangular head. It also has a stocky body and a thin neck.

Visually, this snake has appearences similar to the western diamondback. Both species have diamond patterns and banding on the lower third of their bodies. The differences are in the smaller details. For the banding, western diamondbacks have equally sized bands. Mojave rattlesnakes have bands that differ in size, bands of one color will be thinner than the bands of the second color.

The red diamond rattlesnake, crotalus ruber, is a rattlesnake with one of the least potent venoms. However, it makes up for this by injecting more venom than most.

A bite from a red diamond rattlesnake can be lethal. Bite severity depends on how much venom the snake chooses to inject. The initial onset of symptoms includes:

If left untreated, symptoms will progress to include:

This snake was named for the brick red diamonds along its spine. These diamonds will have a pale border as well. The rest of the snake’s body will be in shades of tan, brown, and dull red. It’s worth noting that juveniles of this species do not develop red diamonds until after they have shed a few times. The tail of the snake will have stark black and white banding.

The red diamond rattlesnake is one of the larger pit vipers, topping out between 3-5 feet. Very large males may grow larger, although this is rare.

This snake has adapted perfectly to living in high desert climates. Namely, the unique way it moves across hot sand. Rather than moving using full-body contact with the ground this snake winds from side to side and propels itself forward.

The sidewinder has the least dangerous venom of all rattlesnakes. However, this does not mean it cannot cause serious harm. This snake has hemotoxic venom that causes pain, swelling, bruising, and hemorrhagic bleb formation local to the bite. Occasionally, these symptoms will spread to the entire limb.

A case study in Journal of Medical Toxicology also notes on a victim of a sidewinder snake bite that was neurotoxic and not hemotoxic. Implying that the sidewinder has a previously unknown, or recently developed, neurotoxic component to its venom. The victim experienced none of the usual hemotoxic symptoms associated with documented sidewinder bites. Instead, he experienced paraesthesias, weakness, fasciculations in and around the bite side, and involuntary muscle contractions.

This snake has distinct horns above its eyes, which also sit high on its skull. This allows the snake to bury itself in the sand and still keep watch for predators and prey.

Sidewinders are one of the smaller rattlesnakes, rarely growing over 2.5 feet in length, and have stocky bodies and triangular heads. This snake will be earthy in color, usually a mixture of cream, tan, brown, pale pink, and grey. Depending on the subspecies, a snake may also have a dark band at the base of the rattle.

Sidewinder tracks are instantly recognizable due to its unique way of moving over hot substrate. Loose sand or soil will be marked with J- or hook-shaped impressions. The tip of the hook will point towards the direction the snake was moving in.

The last snake on this list isn’t actually native to California. However, specimens have washed ashore on Californian beaches. Meet the yellow-bellied sea snake, Pelamis platurus.

The yellow-bellied sea snake is a highly venomous piscivore, meaning that it eats fish, and is the most widespread sea snake in the world. It can be found in every ocean except for the Atlantic and has no known predators. This is also one of the few sea snakes that never needs to return to land. It lives its entire life at sea. Due to being unable to maintain an even blood pressure out of the water, this snake actually can’t leave the ocean either. So, why has this snake been found on Californian beaches?

The only specimens found in California were dead or dying, leaving the snakes too weak to fight the currents pushing them ashore. Weakened or dead, though, venomous snakes can still envenomate people. As reported in Wilderness and Environmental Medicine, there are dozens of cases where a dead snake has envenomed a person. This is why the yellow-bellied sea snake is considered a dangerous snake in California.

The venom of this snake is a mixture of neurotoxins and myotoxins. Symptoms will vary depending on the volume of venom injected and can include muscle pain, stiffness, drooping eyelids, drowsiness, and vomiting. Untreated bites can result in paralysis, renal damage and failure, and death.

As one might expect, the yellow-bellied sea snake has a yellow belly, although it can also be a pale cream or brown as well. This yellow usually wraps up and continues into walls along the snake’s sides.

This yellow is broken only by a stark black or brown stripe. Starting from the tip of the snake’s nose, this stripe remains a solid line until the lower region of its body. Here, the stripe crests outwards in connected saddles. The saddles remain unbroken until the tail, where they separate into blotches or bars of varying sizes.

The tail of this snake is shaped like a paddle and the snake itself grows 3 feet in length. The yellow-bellied sea snake has a narrow head that tapers towards the nose and brightly colored eyes.

Encountering a snake in California can be frightening. The buzzing of a rattlesnake strikes fear into the hearts of many. The most important thing to remember in these situations is that the snake is just as afraid of you as you are of it. In almost all cases, the snake would rather run and hide than attack. Biting is a last resort for the snakes in this list.

In any situation, if you come across a snake calmly back away. Your instinct here may be to run, but move slowly; the snake is less likely to strike if you do not act like a predator. Do not attempt to handle or move the snake. Don’t even poke it with a stick to get it to move.

In most cases, once you are far enough away the snake will turn and flee. Otherwise, it will let you leave unharmed. If you find a snake in your home, neighborhood, or backyard, call a snake catcher to remove the snake. This person will provide you with additional information about how to proceed.

The snakes in this list are the most venomous snakes found in California. All bar one belongs to the rattlesnake family.