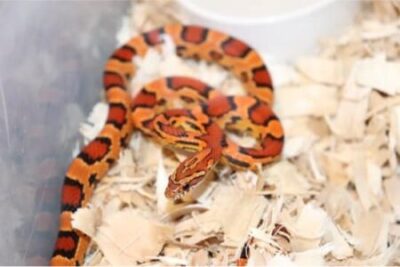 Okeetees are base morphs that are found in the wild. They are used to create designer morphs, which are the result of two base morphs being bred together to create something new.

In captivity, corn snakes live for an average of 15-20 years. According to the journal Age, the lifespan of a captive corn snake can reach 30 years. Wild specimens will be fortunate if they reach 8 years of age.

Kathy and Bill Love have been breeding corn snakes for decades. They were the first to capture, breed, and sell Okeetee corn snakes commercially.

It has more vibrant reds and oranges than other corns. Its black banding is also thick and distinctive.

Abbotts Okeetee corn snakes are a line that was bred from the Kathy Love Okeetee. They were bred by Dr. Lee Abbott, another herpetologist well known on the professional breeding circuit.

The Abbotts Okeetee is a general improvement on the original line. Dr. Abbott selectively bred the original Okeetees to improve their pattern. He chose and bred snakes with a cleaner pattern. Eventually, this gave them a smoother and clearer saddle shape.

Extreme Okeetees have even wider black banding than regular Okeetees. In all other ways, they are the same as other Okeetees.

Breeders pick the offspring with the widest black banding. These snakes have reached the point where the branding completely eclipses the color underneath. This means their saddles are entirely black.

The tessera corn snake has a different pattern to a standard snake. They have a stripe running along their back and are of light tan color bordered by black. Also, the pattern along their sides is broken up and has a pixelated appearance.

The Okeetee Tessera has vivid red color interspersed by a tan-yellow pattern. Few have ever been bred, so you will be lucky to find any for sale.

What Is a Reverse Okeetee Corn Snake?

A reverse Okeetee corn snake is an albino. The Okeetee albino is like an albino, except with the Okeetee pattern. This is where the black bands are expanded around the snake’s dark pattern.

Albino/amelanistic corn snakes have a light orange or yellow background color. The color of their saddles is dark orange or red. This produces a high contrast, like in regular Okeetees.

But it’s not this that sets them apart. It’s the color of the borders around their saddles. Instead of being black, the borders are white. Like in regular Okeetees, these borders between their light and dark pattern are thicker than usual.

Dr. Ian Abbott has bred many different kinds of Okeetees. Aside from the cleaner version of the regular Okeetee, he has also bred Okeetees with different colors.

The first is the ‘Red Okeetee.’ Abbott has bred these to have a bright red background rather than the orange of a regular Okeetee. Their red saddles are even darker still.

He has also bred yellow Okeetees. These have a yellow background color, while their saddles remain the same. This produces a high contrast pattern. Like other morphs/lines, they are not commonly available.

Most buckskin Okeetees have brick red saddles and tan background. They look roughly the same as a regular Okeetee, but without the vibrant orange.

Other buckskins are known as black buckskins, or dark buckskins. These have darker saddles than normal Okeetees. In some cases, they are intense red. In others, they look black.

These snakes may also have some spotting along their backs, unlike other Okeetees.

Where Do Okeetee Corn Snakes Come From?

A ‘locality morph’ is specific to one place. They are the same species as the normal, but have changed color/pattern. This is the result of natural selection, where the color of the snake fits into its surroundings better.

The Okeetee Hunt Club originally caught Okeetees. This club is located in Jasper County, South Carolina, where there are lots of corn snakes. The area is maintained well, flatwoods with lots of grasslands. The snakes around this area often have the unique ‘Okeetee’ markings.

You will find Okeetee’s in overgrown grass, forest clearings, and abandoned buildings. There are many abandoned shacks in the Okeetee Hunt Club grounds. If they aren’t found there, they’ll be found hiding in tree roots.

Okeetee corn snakes are more than double the price of a normal corn snake. You might find them available from $50.

However, rarer corns with the Okeetee genes are more expensive. For example, a scaleless Abbotts Okeetee corn snake costs around $650.

How to Breed Okeetee Corn Snakes

Breeding corn snakes can be difficult because you need to understand genetics. Each snake gets a copy of genes from its mother, and another from its father. But if an animal has one gene for blue eyes, and one for brown eyes, which gene ‘wins’?

There are three ways that a gene can act. It can be either dominant, co-dominant, or recessive. Dominant genes are the ones that are always expressed. If an animal has one dominant gene (brown eyes) and a recessive gene (blue eyes), then the dominant gene will be the ‘winner.’

Okeetees have two sets of the same dominant gene. To ensure that the offspring are Okeetees, it’s easiest to breed two Okeetees together. In all other ways, breeding Okeetees is the same as breeding other corn snakes.