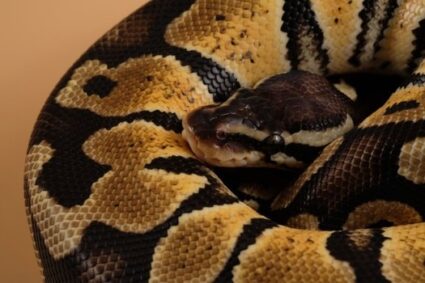 Pastels, also known as ‘pastel jungles’ are the basis of many beautiful designer ball python morphs. This is where other morphs are bred with pastels to produce new and exciting kinds of royal pythons.

Pastel ball pythons were originally imported and bred by Kevin McCurley at NERD/New England Reptile Distributors. They were one of the first morphs to come on the market. NERD has since been responsible for breeding more than a dozen pastel designer morphs.

The most common type is the basic pastel. Other popular morphs include the lemon blast, bumblebee, and axanthic. The price of these snakes ranges from $50 to thousands of dollars, depending on its scarcity.

How To Identify a Pastel Ball Python

Pastel ball pythons have a variable yellow color with a clean, high-contrast black pattern. Their yellow often fades into green, which is why it’s so variable—sometimes the green is more obvious, but not always.

Their underside is a clean white color, and they often have white lips. At birth, their heads have a faded look to them. But in most specimens, as they get older, this tends to darken.

The pastel gene brings out the yellow to varying degrees, so if you breed a pastel with a pastel to make a ‘super pastel,’ they’ll be even more yellow.

For the same reason, the pastel is often bred with other morphs to make them even yellower. They’re the parent of many designer morphs.

They’re more yellow than your average ball python, but that’s about it. They aren’t a designer morph, i.e. one that’s bred from two parents of different morphs. They’re a naturally-occurring morph that was first imported to the U.S. in 1997 by NERD/Kevin McCurley.

At the same time, they were imported by Graziani Reptiles—these two lines still exist today, and are slightly different. There’s a little disagreement over who brought them over first, and who bred the first captive ones. Graziani line pastels don’t brown out as they age like NERD line (‘lemons’) do.

But at the same time, they don’t have a clear definition, and have more blushing. Both lines were found in the wild in Africa, where they were more yellow than other ball pythons, which is why they were imported.

Once they were imported to the U.S., they were quickly bred together to see what they would produce—super pastels. In the years that followed, the first few designer pastel ball python morphs were bred, including:

Many more snakes were to follow, especially once these new morphs were bred together—so, for example, the granite HGW super lemon pastel was first bred in 2010. After the first ones were imported back in the nineties, many more were found and brought over for the sake of genetic diversity.

The super pastel or super lemon pastel is the homozygous form of the morph. That means that they have two copies of the same gene, so the effect is stronger. Where ‘normals’ are yellow, super pastels are extra-yellow.

These are the offspring of a pastel and a pinstripe. Pinstripe is another basic morph—they are a light to dark brown color with very thin, dark stripes. The dark stripes have a very thin, hardly noticeable white border, and the overall color fades to a light underbelly.

A lemon blast shares the pinstripe’s thin, dark markings. But where the pinstripe’s color is a light or dark brown, the lemon blast is even lighter. While they are a little variable, they’re normally either a very light brown or yellow. They also have dark but faded heads.

Lemon blasts are a different snake to a ‘lemon pastel.’ Lemon pastels come from the original imported line. They have the following distinctive features: more yellow, noticeable neck strip, and speckling. These snakes are just pastels—they’re not a designer morph, like the lemon blast.

Bumblebees are the offspring of pastels and spiders. Spiders are a little like pinstripes, in that their patterns are thinner. They’re also quite blotchy, in that the pattern isn’t straight, but very variable and broken.

Bumblebees, or pastel spider ball pythons, keep the spider’s pattern but get the pastel’s color. They range from a light yellow with mottled light brown, all the way to bright yellow, with a lot of white too.

Their undersides are white, and in some cases, those white scales come almost halfway up their body. They mix with the yellow to create a lovely light pattern that’s in high contrast to their dark black stripes.

The only problem with spiders, and bumblebees, is that they have neurological problems. These are caused by the genetic changes in the spider morph, which affect them in more ways than just their appearance.

They cause head wobble, poor balance, trouble feeding, and difficulty recognizing threats. It’s, therefore, a point of debate in the community as to whether we should actually breed them or not.

The axanthic pastel is, unsurprisingly, the offspring of a pastel and an axanthic ball python. While pastels have genes that make their yellow coloration more obvious, axanthic snakes are the opposite.

‘Axanthic’ comes from the Greek for ‘without yellow,’ meaning that they’ve lost all of their yellow pigmentation. So, what does an axanthic pastel snake look like? Do the genes cancel each other out?

Axanthic pastels lack their yellow pigment. But instead of being shades of gray, brown or black like the axanthic, the axanthic pastel is actually silver and black. Aside from that, their pattern becomes blockier and more distinct, just like you would see in a pure axanthic snake.

Mandarin pastels were originally bred from lemon pastels and a snake that showed some unique markings. Unsure of what they were going to get, the team at NERD bred them together and out came the mandarin pastel.

Mandarin pastels are the normal yellow pastel color with dark brown or black pattern. However, large blotches of pattern are black on the outside, with a mandarin orange-red in the middle. Because it’s unclear what exact mutation the unique snake had, you can’t breed these yourself.

These are snakes that have enchi, pastel, and yellow belly genes. Each of these genes is co-dominant, so it can be expressed at the same time. The snake itself is a banana yellow color with a thick, black-banded pattern.

Just like the mandarin pastel, the inside of their black pattern blushes first to an orange, and then to a yellow the further down the body you get. They’re like a cleaned-up mandarin. The only difference is that their color and pattern are a little cleaner.

Lemon pastel yellow bellies are like enchi pastels, but without the enchi. You also have to make sure that you use the lemon pastel line, directly from the original ones imported by NERD.

They share the same yellow color, but the most noticeable thing about them is their thick, dark pattern. Their bands have been broken down, not so that they’re fuzzy, but so that they’re loose and go in different directions.

Their dark pattern is black, fading to dull orange on the sides. The pattern itself is thick and chunky, and surrounded by large spots at random points.

From the yellow belly morph, they inherit a clean, yellowish belly with a speckled pattern where it meets the sides. This morph is also known for its blushing, which is why it has the dull orange to its dark pattern.

The exact size of the patches is highly variable, and depends on the snake. So, for example, one snake might only have a colorful head and neck while the rest of it is white. Others have a colorful head, a big white patch, and then an island of color halfway down their body.

And the white sections are pure white, rather than pinkish white or cream white. Also available is the leopard pastel pied, which comes from the Graziani line instead of the lemon/NERD line.

Super cinnamons are a solid color snake, that range from a dark cocoa to a gray color. They have a clean, light underbelly. They’re bred from 2 cinnamons, which are a dark-colored ball python with a normal pattern.

A pastel super cinnamon is plain just like a super cinnamon, but its color is substantially lighter. It’s a very smooth-looking mid brown or mid-gray color, with just the occasional fleck.

They also have a subtle lighter line running along their back and a short stripe running backward from both eyes.

Most pastels lose their color as they grow older. They “brown-out,” which means that they get more and browner as they get older. Their color turns dull and their pattern fades.

This occurs to varying degrees in almost every pastel ball python. However, because of little-understood genetic interactions, some specimens don’t brown-out at all. And many designer morphs bred from pastels don’t lose their color. Lemon blasts, for example, stay bright well into their old age.