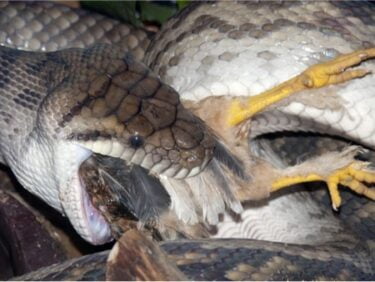 Owners and breeders recommend feeding rodents to snakes. Most snakes eat lots of mice and rats in the wild. But if you want to offer a more varied diet, there are pet snake food alternatives available.

Fish, worms, amphibians, and eggs are suitable for most snakes. Larger mammals, such as chicks and baby rabbits, offer variety. However, the ‘alternative’ snake foods are snacks rather than staple foods.

Snakes don’t need or crave variety. They can live their entire lives eating only rodents and remain perfectly healthy. But we’re going to look at the other types of foods that snakes eat in the wild.

What Do Pet Snakes Eat Other Than Rodents?

Snakes are obligate carnivores. Your snake can’t survive on a vegetarian diet. Most pet snakes live on small rodents like shrews, mice, and rats.

Other snakes eat amphibians, like frogs and toads. Snakes often subsist on just one kind of food, e.g. rodents or amphibians. You don’t need to feed them snacks, supplements, or different foods.

Because snakes get everything they need from a staple food, they don’t need anything else. You can feed them nothing but this one meal for their whole life and snakes will still be happy.

Snack foods aren’t necessary. You’re free to feed them to your snake, but they don’t offer anything they don’t get from staples. Snakes don’t crave variety in the same way that humans do.

Almost any snake can eat fish. It’s the favorite food of garter snakes and water snakes, and grass snakes will eat it too. Ball pythons and corn snakes might, but it depends on each snake.

Because it’s meat, fish offers lots of protein and some fat, just like rodents do. That’s why it’s an acceptable treat for most snakes.

However, fish should be reserved as a rare snack if you do want to offer it. It may change the consistency of their poo when they go to the toilet. That’s what happens when you offer a pet food that it doesn’t normally eat.

Which snakes can eat fish? Garter snakes, ribbon snakes, and water snakes. But you can try feeding fish to any pet snake.

Some pet snakes eat lots of earthworms, like garter snakes. They are commonly regarded as a snack rather than a full prey item.

They are especially useful for feeding juvenile snakes. Some juveniles refuse to start eating rodent prey, no matter what you do. Often they can be tempted with earthworms as they’re small and easy to digest. For you, they’re cheap and easy to feed.

According to Molecular Ecology, this has a basis in the natural world. Juvenile snakes will often start on one kind of food before switching to another as they age. This adaptation is useful as the snake may be too small to eat what an adult might eat.

If you do plan on feeding your snake earthworms, don’t feed them too many. They are low on nutrients compared to other foods like rodents. If you fed the snake nothing but worms, it would get sick and starve, despite eating a lot.

Many snakes eat eggs. The most well-known are egg-eating snakes, which have developed an adaptation to allow them to eat bigger eggs. Through evolution, they got rid of their teeth. Instead, they have spurs on their spine to crack eggs after they swallow them.

Eggs might look far too big for these snakes, or any snakes, to eat. But according to PLoS One, the snake skull is unique in its adaptation to large prey. The left and right sides of each jaw can separate to accommodate bigger prey. This helps them eat eggs and big rodents.

But you shouldn’t feed your snake chicken eggs. They’re too big, even for an egg-eating snake. Instead, stick to quail eggs. These are the right size for snakes, like kingsnakes and corn snakes.

Quail eggs may be available from pet stores or supermarkets. They may be too expensive to feed a snake as a regular part of their diet.

Which snakes can eat eggs? Many snake species eat birds’ eggs in the wild. Almost every snake will eat a whole quail’s egg as a snack.

Amphibians, like frogs and toads, are a favorite food of some snake species.

However, you should consider foods other than amphibians. Most amphibians sold either alive or dead were wild-caught. Wild-caught prey items may contain parasites. Your snake can catch these parasites from the amphibian, either dead or alive.

You could avoid this issue by breeding your own amphibians. There would be a lot of time, expense, and effort involved. But if your snake usually eats amphibians in the wild, it may be necessary.

Insects are less of a general treat. Rather, only some snakes will eat them. But those that do will enjoy them. The garter snake is a species that can eat insects, among other things.

Many snakes will eat insects as a snack, but not as the primary source of their food. That’s because insects offer a different nutritional profile to rodents and similar prey. They are low in fat, and you have to eat a lot of them to get the same amount of protein.

Insects have the added benefit of being easy to source. They’re available from any reputable pet store. Failing that, you could breed your own. They provide a cheap source of food.

Many snakes specialize in eating chicks and juvenile birds. Snakes that live in forest or rainforest environments, especially snakes that live in trees, eat birds. The Burmese python is an example, and has decimated bird populations in the Everglades after being introduced there.

Snakes that usually eat rodents will happily switch to chicks. The only reason you may have trouble is with their beaks, which can be pointy. This makes them awkward for your snake to swallow.

They are the same size, and offer roughly the same nutrients. One area that they lack is calcium, as rodents have a denser and thicker bone structure than chicks. You may need to supplement with calcium if your snake’s main diet is chicks.

Some snakes in the wild specialize in eating big birds. Burmese pythons and other snakes in south-east Asia eat the wild relatives of the modern chicken (the Guinea fowl). Pheasants, partridges, and pretty birds like swifts also make excellent prey.

In captivity, it’s rare for an owner to feed a snake chicken. Most snakes aren’t anywhere near big enough to eat whole chickens. Plus, when a snake is used to rodents, it may not recognize something so different as prey.

If you do feed your snake chicken, don’t feed it store-bought chicken. Raw chicken of this kind can contain bacteria that will make your snake sick. They also likely won’t recognize it as food. Deli chicken also isn’t suitable.

So, feed it live/freshly killed chickens, or none at all. They are all possible, but inferior staple for large snakes because they are leaner than rabbits.

Which snakes eat chickens? Only large constrictors like Burmese pythons, reticulated pythons, and similar can eat chickens. However, any sufficiently large snake could eat small chickens/birds.

Rabbits are small mammals, so offer roughly the same nutrients as rats. They may be a little fattier, but overall offer exactly what a snake needs.

Only the largest snakes are big enough to eat an adult rabbit. But you can get rabbit kits, i.e. baby rabbits. These are about the same size as an adult rat, so they can be fed to adult ball pythons.

That being said, an adult snake is unlikely to change its diet drastically. It may not recognize the rabbit as food after eating nothing but rodents its entire life.

Which snakes eat rabbits? Rabbits are a reticulated python’s staple food, and are also suitable for Burmese pythons. Baby rabbits can be fed to adult ball pythons, boa constrictors, and corn snakes.

Can Snakes Eat Reptiles and Lizards?

Many snake species eat lizards in the wild. They are small enough that they’re caught and eaten without much chance of them fighting back. They’re also common in parts of the world that snakes come from, e.g. Africa and South Asia.

However, most snakes don’t eat reptiles. Constrictors have a hard time with them. Reptiles’ internal organs are different in many respects to ours. For one thing, they’re cold-blooded.

Also, many snakes come from areas where there aren’t lots of lizards. There aren’t many lizard species across North America, at least compared to other parts of the world. So, species here rely on rodents as their food instead.

That being said, many snakes eat other snake species. Kingsnakes get their name as they’re the king of snakes, in that they eat other species.

Snakes are fundamentally different to other pets. So, if you’re serious about caring for your snake, feed it rodents. It’s all that they need to thrive.