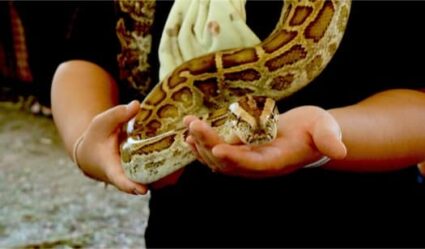 It can be alarming for a snake owner to suddenly find their pet snake behaving aggressively. Snakes aren’t known for being affectionate or loving animals, but with the right handling, most species that are commonly kept as pets are quite docile. Sudden changes in behavior, especially ones as drastic as aggression, can indicate that something is wrong.

Upset snakes that rapidly alter their behavior over a relatively short period of time are often mislabeled as aggressive. Defensive displays are misunderstood as shows of aggression. There are numerous reasons why your snake may be acting out of character, including improper socialization, being in shed, and feeling unsafe.

Snakes acting defensively can be a significant cause of concern for their owners. What’s more is that sudden changes in behavior can hint at more serious underlying problems, such as illness or injury.

Signs of Aggression in Pet Snakes

An aggressive snake can be alarming, especially for new owners. The first question to ask yourself is if what you’re witnessing is actually aggression. There is a difference between an aggressive snake and a defensive snake, as all but a handful of snakes in the world are genuinely aggressive.

Typically, most snakes that feel threatened and defensive will exhibit certain behaviors. As outlined in Behavioral Ecology, these behaviors are:

There are some individual species of snake that have their own quirks when it comes to showing they are upset as well. Some common pet snakes with unique defensive and threat displays are:

Many of the behaviors listed above can cause a snake to be mislabeled as aggressive when, in reality, it is afraid and acting defensively.

My Pet Snake Keeps Biting Me

There are two reasons why your snake might be biting you:

The easy way to determine what your snake feels is the type of bite. Snakes will only latch on and constrict something they intend to eat. When your snake bites you, does it behave this way? If so, then it thinks you’re food.

If the snake bluff strikes or tag bites you and immediately disengages it probably feels threatened and is trying to scare you away. It’s important to identify the reasons why your snake might feel like it has to defend itself.

Now that you know the signs of a defensive snake, let’s look at what might be causing your snake to feel this way.

As snakes prepare to shed, their behavior will naturally change. In relation to suddenly defensive behavior, there are two reasons why they might be acting differently:

It’s best to leave them alone and not handle them during shed, and their behavior will return to normal once they have come out the other side.

Snakes will recognize humans as a threat until they have been taught otherwise. A lack of handling, at any stage in their life, will result in a captive snake feeling insecure and unsafe when approached or handled.

Snake enclosures must be properly set up and maintained for your individual snake’s needs. Every species has different requirements. As an example of the diversity of needs between species, the table below shows the varying temperature ranges and enclosure sizes required for just five of the most common pet snakes.

Elements of the enclosure that may have caused your snake’s behavior to change are as follows:

Any animal that is injured or unwell will exhibit atypical behavior, including defensive displays. Snakes are no exception. Signs of illness or injury to look for are:

Only a few species of snake, like the Garter Snake, can safely be housed together outside of breeding season.

Almost all species of snake, in fact, live solitary lives. As such, housing more than one snake in a single enclosure can cause one or both of the animals to feel defensive, and potentially become aggressive. Fights can even occur, resulting in injury or death.

Some species of snake, including the commonly kept kingsnake, will actively eat their tank mates if housed with another snake.

As a common rule, only one snake should be kept in every enclosure.

One thing that any snake owner appreciates is when their pet is a good eater. Snakes can be so eager for their meals that, at times, they might seem aggressive to unexperienced owners.

This form of ‘aggression’ is shown by the snake immediately attempting to bite, not bluff bite, anything it might associate with food entering its enclosure. This commonly results in the owner’s hand being bitten. The snake, if not immediately realizing its mistake, may also coil around what it is attempting to kill.

Thankfully, this is not a true sign of aggression. Rather, this is simply an over-active feeding response being exacerbated by the snake associating its enclosure being breached with receiving food.

Dealing with Aggression in Pet Snakes

Methodically working through the causes outlined above is a good starting point, as is consulting your vet and conducting research into the behaviors and needs of your snake’s breed.

Regardless, there are three things that you can do, if not doing so already, that can help treat aggression in pet snakes.

A snake will bite you because it thinks you are a predator or prey. The key step here is to teach your snake that you are neither of those things, and this is done through regular handling and proper socialization.

Asides from when your snake is in shed or has just eaten, begin desensitizing it to human contact and breaking that predator/prey association by handling it with 10-15 minute twice-daily handling sessions.

To hold a snake so that it feels supported, pick it up by the thicker section of its middle and drape it over your hand and arm. Don’t restrict its movement or squeeze it, as this can cause the snake to become even more defensive. Avoid holding the snake by the neck or tail as this makes snakes feel that it has no means of escape.

No matter the age of your snake, regular handling and socialization can do wonders for soothing and taming upset snakes.

If your snake thinks your hand is food, or associates you opening the enclosure with feeding, there are steps you can take to break this association. You can:

Enclosure Location and Set Up

Searching for the source of your snake’s change in behavior often does result in needing to make at least one adjustment to the enclosure.

Fixing issues, such as providing a proper basking spot or an appropriately-sized hide, can ease a snake’s anxiety. Providing a hide, with a reptile cave or hollowed-out log, will allow the snake to feel safe. It’s important that your snake has a source of enrichment that it would find in the wild.

Sudden changes in how your snake behaves can be alarming. However, few snakes become aggressive without provocation. Rather, they are acting defensively, and these displays can seem aggressive to those that are not experienced with snake ownership.

1 thought on “Why Is My Pet Snake Suddenly Aggressive?”