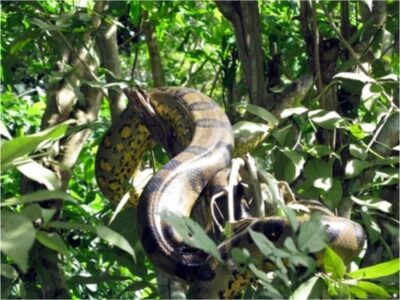 Boa constrictors are known for their ability to ambush their prey. But, despite being menacing hunters, they too have face predators of their own. Finding out the common foes of a boa constrictor can help us understand what role this species has in our ecosystem.

Enemies of boas include eagles, hawks, caimans, alligators, and humans. In most cases, it’s young boas that are hunted down by bigger animals as they are devoid of care from their mother right from birth.

Boa constrictors are non-venomous. This means that their defense mechanisms do not include the release of venom to ward off threats. Instead, they rely on striking or the release of a musk.

Boas are predated upon by land and airborne birds/animals. Unfortunately, snakes don’t have particularly good vision, so they must rely on their incredible sense of smell and natural camouflage to stay safe.

Boas face many airborne predators, including the white-bellied sea eagle, wedge-tailed eagle, and some hawks. Small and juvenile boas are most at risk of being hunted as they can easily be carried off in a raptor’s talons.

Airborne predators soar the skies in search of small animals, such as young boas. Since juvenile boas are left to survive on their own at birth, if spotted in the open while a hawk or eagle passes over, they are susceptible to being carried off by one of these hunter birds.

However, most adult boa constrictors are far too large and dangerous for a hawk or eagle to attack. Even young boas can be a formidable opponent.

The Vulnerability of Young Boa Constrictors

Boa constrictors do not lay eggs. Instead, they give birth to live young. The baby boas are then left on their own without the care of their mother, hunting and feeding on small animals, such as birds and mice.

A few months after its birth, a boa can grow to over 3 feet in length, no longer worrying about airborne predators as potential threats.

Caimans and alligators are the enemies of young boa constrictors as they are undersized and cannot yet match the strength of these larger reptiles.

A single bite from a caiman or alligator can cause massive bleeding and/or infection for an adult boa, leading to its eventual death.

However, adult boas possess incredible strength and size. Therefore, a fully-grown boa can be a good match for an alligator. There are many examples of boa constrictors winning drawn-out battles against alligators.

Boas are considered to be a danger to humans and can be an invasive species. They also have an economic value in the fashion industry.

We kill boas because they’re a threat to humans (women, elderly, and small children). They’re also considered a danger to farm animals and family pets. Boa constrictors are considered a pest by farmers.

Boas can have an adverse effect on local ecosystems. Many boas brought into the U.S. from their native lands have developed a breeding population.

According to Biodiversity and Conservation, boas were introduced onto Cozumel Island, Quintana Roo, Mexico in 1971, and are firmly established on the island. They are a threat to the existence of endemic vertebrates and carnivores, resulting in boa constrictor eradication programs.

An exotic animal that begins consuming native plants and animals and survives long enough to reproduce is considered established. An established exotic that can harm native species, the local fauna, and the ecosystem by eating them or eating their food is deemed to be invasive. Several traits make boa constrictors a risk. These include:

Boas also have an economic value to humans, hunted mainly for their skins. Snakeskins are often used in luxury fashion goods such as belts, handbags, and boots. Some people also hunt boa constrictors for their meat. Certain groups of indigenous people do consume the flesh of boas.

How Does a Boa Constrictor Defend Itself?

Boas will hide from predators as they can remain completely still. They blend well into a natural setting because of their coloring. They have acute sensory abilities, and can detect the heartbeat of an animal, giving them enough time to decide their next course of action.

Sometimes, a boa constrictor may hiss to prevent a predator from getting close to it. However, if hissing is ineffective, it may even emit a musk. If that doesn’t work, then it won’t hesitate to bite in self-defense. From such a large snake, the bite can be very painful.

Boas are powerful constrictor snakes. They kill by stopping the blood flow inside their prey, according to the Journal of Experimental Biology.

Researchers from the study found that when a boa constrictor kills its prey, it squeezes hard enough to inhibit its blood pressure, blood ion balance, blood gases, and heart function. This indicates that boa constrictors can even attack stronger and larger animals than themselves.

Boa constrictors are typically an apex predator in their own ecosystems, but their young are preyed upon by bigger and stronger carnivorous animals. They are experiencing habitat loss, such as the destruction of forests. Also, boas are used in the pet trade and widely killed for their skin and meat.

MLA Style: Carter, Lou. "What Are The Predators of Boa Constrictors? (with Video)" Snakes For Pets, (December 16, 2020), https://www.snakesforpets.com/predators-of-boa-constrictors/.

APA Style: Carter, L. (December 16, 2020). What Are The Predators of Boa Constrictors? (with Video). Snakes For Pets. Retrieved December 16, 2020, from https://www.snakesforpets.com/predators-of-boa-constrictors/