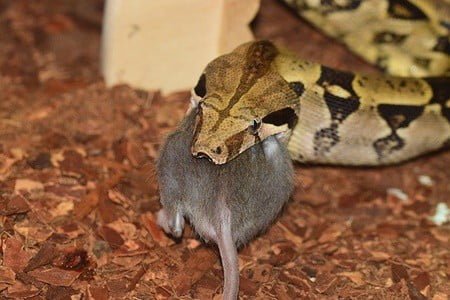 Feeding live rodents to snakes is a controversial topic. While some hobbyists feel snakes should be fed a more natural diet, others feel it’s much safer to offer pre-killed rodents to their pets.

Feeding pre-killed prey to your pet snake is a safer and more convenient option. In a confined space, live prey can scratch or bite your snake, leading to injury and infection. Live prey is more expensive as you will need to house and feed the rodents for when your snake becomes hungry. Other experts argue that snakes should be given live prey to give them a chance to hunt.

A captive snake has a different environment to snakes in the wild. As your snake constricts its prey, the rodent will fight back using its sharp teeth and claws. This leaves your snake susceptible to injury, which can lead to complications requiring veterinary care or even euthanasia.

Contents show
1 What Are the Advantages of Feeding Live Prey to Snakes?
1.1 1) They Have More Nutrients
1.2 2) Movement Increases Your Snake’s Appetite
1.3 3) Some Snakes Only Eat Live Prey
2 What Are the Disadvantages of Feeding Live Prey to Snakes?
2.1 1) Injuries and Infections
2.2 2) More Likely to Have Parasites
2.3 3) Inconvenient to Store
2.4 4) More Expensive
2.5 5) Ethical Issues
2.5.1 Pre-Killed Rodents vs. Live Rodents for Snakes

What Are the Advantages of Feeding Live Prey to Snakes?

Live prey is the first choice among many snake owners because it feels more natural and provides a captive snake with the opportunity to hunt. Here’s some advice on how to breed feeder rats.

1) They Have More Nutrients

Live prey and freshly-killed mice are denser in nutrients than frozen kill. This is because food tends to lose its nutrient profile the longer it is stored. Furthermore, the process of freezing may also result in some nutrient loss in pre-killed rodents.

Many snakes refuse pre-killed prey because of their lack of movement. Owners have to wiggle pre-killed prey using a pair of tongs or expose the rodent’s brain to entice their pets. A live rodent will move around in your snake’s enclosure, stimulating your pet’s appetite and its urge to hunt.

3) Some Snakes Only Eat Live Prey

A wild-caught snake or a snake that has been accustomed to live prey may have difficulty adjusting to a pre-killed diet.

Many owners have to go to great lengths to feed pre-killed prey to their snakes, such as dipping the rodent in chicken broth, cutting it to expose blood or rubbing it against another animal’s bedding to confuse the snake’s senses.

Therefore, most snake owners find it easier to feed live prey to snakes that are fussy about eating pre-killed animals.

What Are the Disadvantages of Feeding Live Prey to Snakes?

A common misconception among hobbyists is that snakes should only be fed live prey. This isn’t necessarily true as wild snakes, like other carnivores, won’t pass up the opportunity to eat a freshly killed animal.

The stomachs of wild snakes typically contain prey animals that were in advanced stages of decay when they were being consumed. Therefore, even though a snake may prefer to hunt live prey, it’s not vital for its health.

Most rodents don’t go without a fight while being attacked. Injuries can happen if your snake isn’t hungry or if it is unsuccessful with its strike. A mouse or rat can bite a snake during its strike, causing injuries that can sometimes be severe and even life-threatening.

Alternatively, a snake may not show much interest in the live prey if it doesn’t have an appetite or if the prey is too large for the snake.

As the prey gets bored or hungry, it may start chewing on your pet as both have nowhere to flee. Therefore, if a rodent is placed in your snake’s enclosure for prolonged periods without supervision, it can hurt your snake.

Many snakes lose their eyes due to attacks from live prey. Moreover, a rodent’s sharp incisors can easily cut through a snake’s scales, leaving it susceptible to serious infections.

2) More Likely to Have Parasites

Live mice are notorious for carrying parasites that may cause diseases in snakes. Mice also carry zoonotic parasites that lead to sickness to humans.

According to Veterinary Microbiology, they transmit diseases to animals and humans through bites, droppings, mites, ticks, fleas, and lice.

According to the Centers for Disease Control, the following are some common zoonotic parasites and diseases carried by mice:

Keeping live rodents for a snake isn’t as convenient as storing pre-killed, frozen feed. Live rodents that aren’t fed immediately will have to be housed separately. You’ll also have to feed them to keep the live rodents healthy.

Sometimes hobbyists have to go through long waiting lists to get live rodents from their local dealer. It’s also common for dealers to run out of live mice entirely due to the high demand for rodents in the medical industry.

Moreover, most snakes only consume one prey a week, requiring you to purchase fresh prey every time your snake needs to eat. Some hobbyists like to raise their prey, but this can be time-consuming and expensive compared to buying pre-killed prey.

Live prey is often more expensive than frozen or pre-killed mice. You also spend more on gas as you have to visit a store or dealer every week when you need a fresh supply of mice.

Unlike in the case of frozen mice where you have to place the prey in the freezer, a live mouse needs to be housed in special conditions and fed regularly to keep it healthy – all of which come with an added cost.

Some snake owners also find it inhumane and cruel to throw a live mouse into a snake enclosure as the prey does not have a chance to escape.

Most snakes don’t mind it if they’re given pre-killed prey only. Snakes will still consume dead animals, even in the wild.

Pre-killed prey is more convenient because you can buy it in larger quantities and stockpile it in your freezer. This way you have a prey ready for your snake whenever it needs to be fed.

Some stores have freshly killed prey, which you can freeze for later. Unlike live prey, that cannot be left with a snake overnight, freshly killed can stay in an aquarium for several hours without requiring your supervision.

Even if your snake doesn’t have much of an appetite during its feeding time, the freshly-killed mouse will remain fresh until it is ready to be eaten. It takes at least a couple of days before it will start to decay.