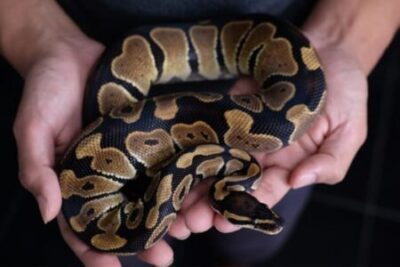 If you’re confused about the difference between pythons and boa constrictors, you’re not alone. Boas and pythons look really similar, so similar in fact, that they are often misidentified. Want to know how you can tell them apart?

The differences between pythons and boas include their geographical origins, the number of skull bones and teeth they have, and the way they reproduce. Boas give birth to live young, whereas pythons lay eggs. Boas and pythons belong to separate subfamilies of the Boidae family of snakes.

Now that you have a basic answer to your question, let’s look at the similarities and differences between a python and a boa constrictor in a bit more detail.

Contents show
1 Are Pythons And Boa Constrictors The Same?
1.1 Large Size
1.2 Non-Venomous Constrictors
1.3 Live in Similar Habitats
1.4 Primitive Species of Snake
2 Boa Constrictor And Python Similarities
2.1 Heavy Skulls And Jaws with Fixed Teeth
2.2 Have The Remnants of Hind Legs
2.3 Have The Same Type of Scales
3 How Are Pythons And Boas Different?
3.1 Reproduce Differently
3.2 Boas Have Fewer Skull Bones And Fewer Teeth Than Pythons
3.3 Found in Different Geographical Locations
4 What’s The Difference between a Python And An Anaconda?

Are Pythons And Boa Constrictors The Same?

The short answer is no, technically they are not the same. According to Molecular Phylogenetics and Evolution, these two species have been on separate evolutionary paths for quite some time.

But even the most argumentative herpetologist will agree that they are very similar. There are only a handful of small differences between them.

The main reason why people get confused between these 2 species of snake is because of the “family resemblance”, so to speak.

You see, pythons and boa constrictors do belong to the same family of snakes (the Boidae family), and because of this, they have a lot in common.

An obvious point to start with is that both boas and pythons are large, bulky and heavily built. Female snakes are larger than male snakes.

According to Research Gate, both species are in fact among the largest and heaviest snakes in the world.

Neither species is venomous. Rather than injecting venom, boas, and pythons instead rely on a body of solid muscle to subdue, squeeze and suffocate their prey.

Both snakes are, therefore, non-venomous ambush predators that kill primarily by constriction.

Although boas and pythons live in different parts of the world, both species inhabit a variety of habitats like swamps, grasslands, and deserts, though most are arboreal (tree-dwellers) that like to live in forests.

In anatomical and behavioral terms, both pythons and boa constrictors are considered to be primitive.

Not only is the method by which they hunt thought to be primitive (constriction is an ancient prey-killing tactic among snakes), but they also have several anatomical features that harken back to their primitive ancestors.

Let’s go a bit deeper and talk about the anatomy of these two snakes. So, what anatomical similarities are there between the boa and the python?

Pythons and boas each have a heavy prey-crushing skull and somewhat rigid jaws with teeth that are both curved and slightly backward-facing to make it difficult for prey to escape.

The skull density and rigid dentition in boas and pythons are just two examples of how each species has retained the same anatomical features associated with primitive snakes.

Have The Remnants of Hind Legs

Although they no longer have legs, both species of snake still have a pelvic girdle, according to Biological Reviews.

This is a hip bone that in the past was used to support rear legs. This is something that is not present in more evolved snake species.

Furthermore, boas and pythons also have vestigial limbs known as “spurs”. A snake’s spurs are basically small claws that are the last remains of what were once limbs.

Spurs are often more obvious in male snakes, and can sometimes be useful during combat.

Copeia stated that both male boas and pythons also use their spurs to grasp and position the female during mating.

Have The Same Type of Scales

Some snakes have smoother scales than others. There are 3 main types of scales; smooth, keeled and granular and each has a different hand-feel.

Boas and pythons both have granular scales, which are the smoothest type of scales. Their skin consists of fine, granular scales that feel smooth and silky to the touch.

How Are Pythons And Boas Different?

As we’ve learned, boas and pythons are closely related. Both belong to the Boidae family, which explains why they are so alike.

One of the most significant differences between these 2 snakes is how they reproduce. Boas and pythons each have a distinct reproduction method that sets them apart from one another.

Pythons, in contrast, first lay their eggs (they lay up to 28 in a single batch or “clutch”) and then incubate them outside of the body until they hatch.

Boas Have Fewer Skull Bones And Fewer Teeth Than Pythons

Pythons have a pair of upper jaw bones called “premaxilla” that boas do not have. These jaw bones house teeth, which means that pythons typically have more teeth than boas.

Another main difference between the boa constrictor and the python is that they evolved in different geographical locations.

The python is what’s known as an “old-world” snake. “Old World” is a historical term used in the western world to refer to Africa, Asia and sometimes Europe.

Pythons are native to Africa, Australia, and Asia, hence the name.

Although pythons do exist in North America (particularly Florida) they were introduced accidentally and are considered to be invasive (not a native) species.

The boa constrictor, which has origins in (and which is more prevalent in) the Americas, is considered to be a “new-world” snake.

What’s The Difference between a Python And An Anaconda?

An anaconda is a type of boa constrictor – a really big one that thrives in water, hence the nickname they are sometimes given, “water boas”.

Anacondas reproduce in the same way as other boas, by giving birth to live young. Anacondas can have anywhere between 14 and 82 babies, each one measuring more than 62 centimeters (or 24 inches) long.

Like all other boas, the anaconda is a powerful constrictor that kills its prey by coiling around its victim’s body. However, anacondas are incredibly muscular boas, therefore, they tend to be bigger and much more heavily built than pythons.

It should come as no surprise then, that the green anaconda (also known as the giant anaconda) is the largest snake in the world. An adult green anaconda can weigh anywhere between 68 and 108 kilograms and as we’ve established, they can grow to over 10 meters long. Although the average length is closer to just 5 meters.

Adult anacondas are so big and muscular that they can take down huge prey like full-grown caiman, along with giant rodents such as the capybara, and even deer and tapirs.