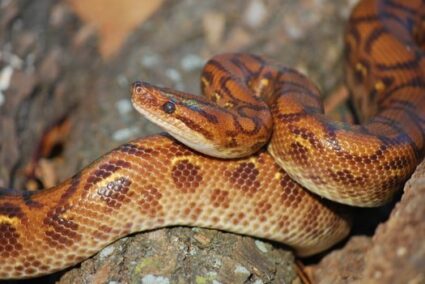 The rainbow boa is one of the world’s most unique looking snakes. It gets its name from the dazzling rainbow-colored iridescence that its scales emit in bright light. But there is much more to this snake than its appearance.

Rainbow boas’ scales work like tiny prisms, refracting light into different colors. They have an infrared-sensing organ that allows them to ‘see’ heat, and a prehensile tail for gripping branches. Rainbow boas give birth to live young, and have been known to reproduce asexually, through parthenogenesis.

Hailing from hot, wet rainforests, rainbow boas can be tricky to care for in captivity. However, they have a docile temperament, and make beautiful display snakes. If looked after properly, they can live for over 20 years.

Due to their unique coloration, rainbow boas are also popular among snake owners. They aren’t beginner snakes, but can thrive if well cared for. Here are some cool rainbow boa facts for you to enjoy.

If you shine a full-spectrum light on a rainbow boa, you’ll see a beautiful iridescent sheen. Where the light hits their scales, they seem to glow in rainbow colors. This is how they got their name.

But a rainbow boa’s scales are not truly rainbow-colored. They don’t contain multicolored pigments. Their scales are reddish-brown in color, with dark brown markings. In shade, or low light levels, these snakes don’t look rainbow at all.

The phenomenon that causes the rainbow effect is called structural coloration. The top layer of a rainbow boa’s skin is transparent. But it contains microscopic ridges that refract light, splitting it into wavelengths of different colors. It works similarly to a glass prism.

This causes a holographic effect. When the rainbow boa moves, its colors will seem to shift as the angle of the light changes. This effect is most visible when the snake has recently shed.

Scientists aren’t sure why rainbow boas evolved this structural coloration. However, it may offer them some protection from the harmful effects of UV radiation.

Rainbow boas are one of several snake species that have the ability to detect infrared radiation. This allows them to ‘see’ heat, a little like an infrared camera.

It’s not strictly part of their vision, but it’s much more sensitive than the way in which we feel heat. They share this ability with several other boas, pythons, and pit vipers like rattlesnakes.

Looking closely at a rainbow boa, you’ll see a row of tiny holes above its top lip. These holes are called heat pits. According to Nature, they are lined with special ion channels containing highly sensitive infrared receptors.

Using this unique organ, rainbow boas can sense prey from one meter away. They can detect minute changes in temperature, as low as 0.003 degrees celsius. This helps them to hunt during the night, in complete darkness.

Alongside prey detection, there are many other uses for the pit organ. It allows the rainbow boa to find warm places to hide, which helps them regulate their body temperature. They can also use their heat detection to spot approaching predators.

Most snakes can be divided into three categories: terrestrial (ground-dwelling), arboreal (tree-climbing) and fossorial (burrowing). However, rainbow boas are classified as generalists, according to the Journal of the Royal Society.

Though they spend most of their time at ground-level, rainbow boas can climb trees. They have a prehensile tail, which means it’s capable of grasping objects. They use their tail to help them grip when navigating trees, if necessary.

Wild rainbow boas have a varied diet. As long as it’s a warm-blooded animal, and the right size, they’ll eat it if they can catch it. While they primarily feed on rodents, their climbing ability helps them catch birds and bats.

Being constrictors, rainbow boas squeeze their prey to death by cutting off its blood circulation. They then swallow the prey whole – bones, feathers, fur and all. They can digest their prey’s bones and teeth, providing them with dietary calcium.

Rainbow boas are classified as ‘primitive snakes’. This means that they have been on earth for millions of years without having evolved much. They share several evolutionary leftovers from their ancestors, which aren’t seen in modern snakes. For example:

A rainbow boa’s vestigial legs, which evolved from femur bones, are called spurs. They look like two small protrusions that stick out on either side of the cloaca, on the snake’s underside. Interestingly, spurs aren’t attached to the spine in any way – they ‘float’ amongst the muscle tissue.

Male rainbow boas typically have larger and more pronounced spurs than females. However, there are exceptions to this, so it isn’t a reliable way of sexing them.

The reason that the males’ spurs are normally bigger is thought to be related to mating. According to PLOS One, male boas use their spurs to poke or rub the female during courtship rituals.

Around 70% of the world’s snake species lay eggs. Oviparous (egg-laying) species include corn snakes, bull snakes, and pythons. But rainbow boas are an exception – they give birth to live young.

Brazilian rainbow boas are ovoviviparous, like most other boa species. This means that while they do produce eggs, they don’t lay them. The eggs develop inside the mother’s body until they’re ready to hatch.

This is different to viviparity (how mammals reproduce) because there is no placenta. Each baby is contained inside its own egg, with a yolk sac that provides it with nutrients. The eggshell is thin, as the babies are well protected by their mother.

After 8-12 weeks of development, the babies hatch inside their mother, and she gives birth to them. Rainbow boas can give birth to between 1 and 35 babies, but the average litter size is 10.

Juvenile rainbow boas are born fully developed, ready to hunt and survive by themselves. They leave their mother almost immediately.

Rainbow Boas Can Reproduce Without Mating

Parthenogenesis is a phenomenon in which female members of a species can reproduce asexually (without mating with a male). The female’s eggs spontaneously grow and develop into young, without any male genetic input. The resulting babies are clones of their mother, sharing 100% of her DNA.

Rainbow boas are one of a few types of snake that can reproduce via parthenogenesis. This was documented in a 2012 study published in Zoo Biology. A 22-year-old female Brazilian rainbow boa gave birth to four young, without mating with a male.

The snake was living with a vasectomised male at the time. However, the researchers tested the babies and found them not to carry any of the male’s genes. So, parthenogenesis was the only explanation for the litter.

Parthenogenesis is extremely rare, so don’t expect your pet rainbow boa to suddenly give birth. However, you might want to familiarize yourself with caring for baby snakes, just in case. It’s also been documented in other species, such as pit vipers and pythons.

Wild-type rainbow boas are reddish-brown in color, with distinctive dark brown rings and spots along their backs. But several rainbow boa ‘morphs’ have also been developed.

Morphs are snakes that look different to the norm, whether they have a unique color, pattern or both. They’re created by selectively breeding for genetic mutations.

One of the most distinctive rainbow boa morphs is albino. True Brazilian rainbow albinos, or T negative albinos, were first bred by Outback Reptiles in 2018. They have no melanin (dark pigment), giving them red eyes and pale orange and white scales.

Albino rainbow boas do exhibit a rainbow sheen under full spectrum lighting. However, it is more of a subtle shimmer, compared to the obvious glow seen in wild-type rainbow boas. This may be because iridescence stands out more on a darker background.

There Are Five Subspecies of Rainbow Boa

The rainbow boa’s scientific name is Epicrates cenchria. When most people think of rainbow boas, they imagine the Brazilian rainbow boa. This is the nominotypical subspecies (E. c. cenchria). There are four other subspecies:

The Brazilian rainbow boa is the most common. As well as Brazil, it’s found in every country surrounding the Amazon basin. It also inhabits the Guianas, Suriname and Venezuela. The other subspecies are found only in specific areas, as denoted by their species names.

There are also several other species in the Epicrates genus, including the Colombian rainbow boa.

In the wild, rainbow boas live in a moist environment. They dwell in hot, wet rainforests, and spend a lot of time near the water. They depend upon tropical temperatures and high humidity.

The same is true for captive rainbow boas. The vivarium needs to be kept at 70% humidity at the least. There are several ways to achieve this:

It can be tricky to get the humidity perfect. If it’s too humid in the vivarium, mold and fungus can grow. Your rainbow boa may also develop scale rot.

But a lack of moisture can result in health problems, such as stuck shed and eye caps. This could lead to a potentially serious infection.

Like most snakes, the lifespan of rainbow boas is long. Captive rainbow boas usually live for 20 years or more. Certain individuals have been known to reach the age of 25. Both males and females can continue breeding for as long as they live.

In the wild, though, a rainbow boa’s life is typically shorter. The average life expectancy of a wild rainbow boa is thought to be around 10 years. However, many snakes die as juveniles. This is because of the risks that come with living outdoors.

For example, rainbow boas are susceptible to predators. They are often eaten by birds of prey, such as eagles and hawks. Things like dehydration, starvation, overheating, illness, and infection are also a risk to wild boas.

Pet rainbow boas aren’t usually exposed to these dangers. They have access to veterinary care, food and water on-demand, and consistently perfect habitat conditions. If you look after your snake, and raise any concerns with a veterinarian, it’s likely to live for a long time.