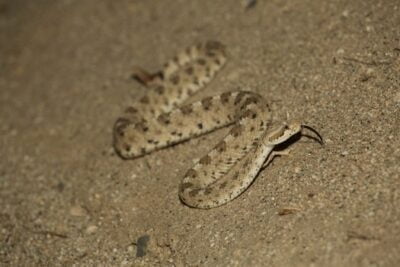 The sidewinder rattlesnake is a species of desert pit viper, native to the southwestern United States. Its method of movement, for which it is named, allows the sidewinder to easily navigate loose sand.

Sidewinders have small ridges above their eyes to protect them from sunlight and sand. Their scales can change color depending on temperature. Sidewinders hunt warm-blooded prey via heat detection, but can also eat reptiles, including other snakes. Female sidewinders give live birth, and will care for their young for up to 10 days.

Though they’re one of the smallest rattlesnakes, sidewinders have toxic venom. A bite could leave you with swelling and internal bleeding. Sidewinders aren’t aggressive, but they may bite if stepped on.

The nickname ‘sidewinder’ or ‘sidewinder snake’ refers to Crotalus cerastes, a type of rattlesnake. This species also goes by the name ‘horned rattlesnake’. It’s a small but venomous snake that inhabits deserts in the southwest U.S and northern Mexico.

There are three types of sidewinder, each named after the desert that they inhabit: Mojave, Sonoran and Colorado. Here are 17 fun facts about sidewinder snakes.

1) Named for Their Unique Locomotion

Why are sidewinders called sidewinders? It’s because of the way they move. Their sidewinding motion is a fascinating adaptation that helps them move on loose sand.

Most snakes move roughly in a straight line, with their entire body touching the ground. But when sidewinders move, only their head and tail make contact with the earth. They anchor themselves with their tail, and throw their bodies forward in an S shape. This propels them along diagonally.

This type of movement leaves characteristic J-shaped tracks in the sand. It reduces contact between their body and the hot sand below them, preventing overheating. It also allows sidewinders to move at great speeds.

2) Horns to Protect Their Eyes

The sidewinder’s less common nickname is ‘horned rattlesnake’. This name refers to two spiky protrusions that grow above their eyes. However, they are not truly horns, as they are not made of keratin. Instead, they are supraocular scales, made of skin.

Scientists aren’t exactly sure why sidewinders evolved these special scales. However, it’s thought that they serve two main functions:

Sidewinders often bury themselves in sand. They need to keep their eyes clear to watch for prey.

Sidewinder rattlesnakes are endemic to a small part of North America. They can’t be found anywhere else in the world. In the U.S., sidewinders can only be found in four states:

They are also native to parts of northern Mexico, close to the border (Sonora and Baja California).

Sidewinders only inhabit dry, sandy, arid areas. They’re solitary animals, and prefer to stay away from populated areas. So, you’re highly unlikely to find a sidewinder in your house or yard. But you may come across one if you go out exploring in the desert.

Like all rattlesnakes, sidewinders are strict carnivores. However, they aren’t fussy eaters. They will consume just about any animal that they come across, if it’s small enough to swallow.

A sidewinder’s preferred prey is rodents, such as kangaroo rats. But if necessary, they will eat birds and reptiles, including smaller desert-dwelling snakes. Juvenile sidewinders start off by eating small lizards.

Sidewinders have long fangs and potent venom, which quickly disables their prey. They are ambush predators, so they don’t chase their prey down. Instead, they partially bury themselves in sand, and lie in wait for prey to pass by. They will then strike at the animal, and wait for it to die before swallowing it whole.

5) One of the Smallest Rattlesnakes

Many species of rattlesnake can reach 5 feet in length or more as adults. But sidewinders are one of the smallest rattlesnakes in the world. The only smaller species is the Pygmy rattlesnake, Sistrurus miliarius.

Sidewinders remain between 1.5 and 2 feet long, even when fully grown. Rarely, they can reach lengths of 2.5 feet. But this is difficult, as sidewinders have short lifespans in the wild. They’re the preferred prey of many animals such as coyotes, birds of prey, and reptiles such as leopard lizards.

Interestingly, female sidewinders are bigger than males. This is uncommon among rattlesnake species, where usually the males outgrow the females.

6) Bites Are Rarely Fatal to Humans

Sidewinders use venom to weaken and kill their prey. They may also bite a potential predator in self-defense. This means that sidewinders can bite humans, if stepped on or threatened.

According to the Journal of Medical Toxicology, a sidewinder bite may rarely result in neurotoxicity (damage to the nervous system). This can cause weakness, muscle twitching, and paresthesia (tingling sensations).

Being ambush predators, sidewinders rely on camouflage. They spend most of their time hiding in sand, waiting for an unsuspecting rodent to pass by. If they were clearly visible, meals would be hard to come by.

For this reason, sidewinders have evolved to blend in with desert sand. They have cream to tan scales, with light brown blotches. Their scales are keeled (ridged), which aids camouflage and also helps them grip the sand.

Sidewinders have learned to bury themselves in the sand, with only their eyes sticking out. It’s almost impossible to spot a sidewinder that doesn’t want to be seen. This helps them to avoid being picked out by predators.

According to the Quarterly Journal of the Florida Academy of Sciences, sidewinders can change the color of their scales. This is known as metachrosis. It’s common among lizards such as chameleons, but rare in snakes.

In warm temperatures, sidewinders are cream to tan in color. But in the colder months, sidewinders have the remarkable ability to darken their skin. The cool temperatures trigger the dispersal of melanin (dark pigment) inside their scales. As a result, they turn dark brown.

Sidewinders belong to a group of snakes called pit vipers. They have small holes, called heat pits or pit organs, between their nostrils and eyes. Many species of boa and python also have heat pits.

A sidewinder’s heat pits are lined with ion channels, which contain infrared receptor cells. These cells can detect the slightest change in infrared radiation, giving the snake a sort of heat vision.

This gives the sidewinder the ability to sense the presence of endothermic (warm-blooded) prey. They can detect the exact location of a rodent or bird from a meter away, even in pitch darkness.

10) Live in Rodent and Tortoise Burrows

Although sidewinders can cover themselves in the sand, they can’t dig burrows or dens for themselves. If they want to hide underground, they have to use a pre-existing cavity.

Normally, this is a burrow belonging to a rodent or tortoise. A sidewinder would use such a burrow for three reasons:

As well as animal burrows, sidewinders may also hide out in rock crevices and abandoned mines.

11) Give Birth to Live Young

Around 70% of all snake species lay eggs. However, sidewinders are an exception to this rule. They are ovoviviparous, meaning they give birth to live young. This is a trait shared by other rattlesnakes, garter snakes, and boas.

Unlike in mammals, sidewinders don’t nourish their young with a placenta. Their babies develop inside eggs, and feed off of the yolk sac. But these eggs are retained inside the mother’s body until they are ready to hatch.

Female sidewinders gestate for 4 to 5 months, and give birth to up to 20 young in one litter. The babies are born inside a burrow or den, and remain there until they’ve shed for the first time.

Baby reptiles are precocial, meaning they can survive by themselves from the moment they are born (or hatch). So most reptile mothers (including snakes) don’t provide any maternal care to their young. Once they’ve given birth, or laid their eggs, their job is done.

Sidewinder rattlesnakes, however, are an interesting exception to this rule. After the babies are born, the mother guards them closely for several hours. The babies will stay in the burrow with the mother for 7 to 10 days, until they shed for the first time. This gives them extra protection from predators.

Neonatal (newborn) sidewinders, while they are still in their burrow, exhibit one of the strangest behaviors seen in snakes. They’ll huddle together at the burrow’s entrance, in a constantly moving ‘ball’ of snakes, for hours at a time. Individual snakes will periodically move from the outside to the inside of the ball, and vice versa.

According to the Journal of Zoology, this behavior helps neonates to regulate their body temperatures. Maintaining the perfect temperature helps to facilitate shedding and therefore encourage growth. It’s a survival mechanism that helps these tiny snakes to survive.

14) Lure Lizards with Their Tails

Because juvenile sidewinders are so small, they struggle to catch and eat most kinds of prey. So to help them survive to adulthood, they’ve evolved an interesting adaptation.

Young sidewinders use their tail to attract small lizards. This is called caudal luring. They wiggle their tails in a specific way to imitate a lizard’s natural prey – caterpillars and moths. When the lizard attempts to eat the tail, the sidewinder strikes.

This ability is shared with many other pit vipers, including copperheads and cottonmouths. They lose it when they reach adulthood, and can eat a wider variety of animals.

From November to March, when the weather is cool, sidewinders are diurnal. They’ll rest throughout the night in order to make the most of the sun’s heat during the day.

But for the rest of the year, sidewinders are active at night. This is because the daytime heat during the warmer months is too much for them to handle. They hide out in burrows during the hottest hours.

16) Can Be Kept as Pets in Some States

In certain parts of the U.S., such as California, it’s legal to keep sidewinders as pets. Owners of venomous snakes are referred to among reptile enthusiasts as ‘hot heads’ (venomous snakes are nicknamed ‘hots’). You shouldn’t consider keeping a venomous snake as a pet unless you are highly experienced.

Depending on where you live, you’ll likely need to apply for a permit. Many states will only grant a permit to someone with many years of experience, and above a certain age. In some states, such as Hawaii, Illinois, and Kentucky, keeping rattlesnakes is outright illegal.

Although sidewinders have short lifespans in the wild, the same can’t be said for captive specimens. Pet sidewinders, given the proper care, can live up to 20 years.

However, this isn’t a guarantee. Sidewinders are difficult to care for, and can develop health problems if things go wrong. They require high temperatures, extremely low humidity, and regular food.

Wild-caught sidewinders often refuse to eat in captivity, so feeding can be a challenge. Inappropriate temperature and humidity inside the vivarium can cause issues, such as scale rot.