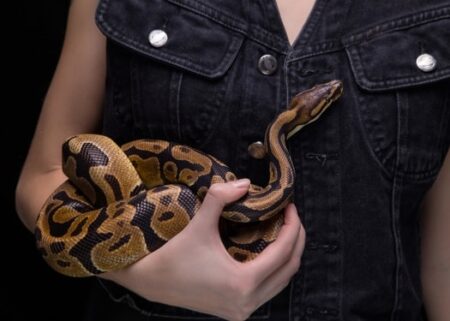 Like any pet, ball pythons (royal pythons) can and do get sick. There are many signs that your snake isn’t feeling well, and it’s absolutely crucial that you learn about them so that you can get your snake healthy again.

Health problems in ball pythons most commonly affect the skin, mouth, and respiratory system. If you notice changes in your ball python’s behavior and attitude to handling, it’s likely to be sick. Personality changes can indicate pain, stress, and unhappiness.

A sick ball python will only get worse if it’s left untreated. Some health problems, such as snake mites and regurgitation, can easily be treated at home. Other health problems and diseases require care from a vet.

Is My Ball Python Sick?

We’ll look at the most common ball python health issues. You’ll then be able to help your ball python to recover from illness as soon as possible.

Optimal temperatures and humidity levels are species-specific. Check that the enclosure is warm enough and the humidity level is optimal.

Mouth rot in ball pythons occurs when the snake has a bacterially-infected wound in its mouth, perhaps due to losing a tooth or fang. You can tell that a ball python has mouth rot due to the following:

It’s vital to get mouth rot treated quickly. If the infection gets into its bloodstream—which it definitely can—then the snake will develop sepsis. Mouth rot itself isn’t fatal, but sepsis is a life-threatening condition.

To treat mouth rot, laboratory testing will be required. The Journal of the American Veterinary Medical Association has stated that there are several kinds of bacteria that can be responsible for mouth rot. It’s vital that the vet identifies which bacteria is infecting the snake.

Once the bacteria have been identified, antibiotics will be issued. These antibiotics could be injections or tablets that are taken orally.

Ball pythons can get stressed out. Stress in snakes is the result of many easily preventable husbandry issues, such as:

The most obvious sign of stress in ball pythons is head rubbing, especially if your snake is rubbing its head against things when it isn’t shedding.

This can be a sign of a mite infestation (see below), but it can also be a sign of stress. If this behavior continues, then your ball python can develop raw spots and sores on its head and/or nose.

Snakes can catch parasites just like any other pet. Both ticks and mites feed on the snake while they’re inside their enclosure. They then scuttle off to the corners of the enclosure to places where they won’t be disturbed.

Mites and ticks are easy to spot as they’re visible to the naked eye. Mites look like small, round, black seeds. Check along their back to see if there are any mites moving around.

But look around their eyes—mites like to sit around the edge of a snake’s eye. Ticks are larger. Initially, they’ll appear as small black dots as big as apple pips with their heads hidden underneath the snake’s scales. As they feed, they will start to get bigger and more noticeable.

To get rid of mites and ticks, the best option we’ve found is Provent a Mite. It’s the only mite spray created by a breeder with experience with snakes. It’s also the only product that will not hurt your snake.

When you treat mites and ticks, you have to make sure to spray both the snake itself and its enclosure. That’s because ticks and mites will hide around the enclosure while they digest their blood meal.

Remove the snake and use the spray in accordance with the instructions provided with the can. Then spray the entire enclosure (after it’s been cleaned) and leave the spray to dry before putting the snake back in.

Snakes can develop issues during their shed. Normally due to environmental factors, the snake will be unable to shed all of its skin at once. It will come off in small patches, causing the snake stress.

Most shedding issues center around the eye caps and the tail. If the snake can’t shed its eye caps, it can go blind. A snake that can’t shed its tail could get a bacterial infection that potentially leads to sepsis.

Increase the humidity in your snake’s enclosure. The extra humidity will make the snake’s skin less dry, and will help it to come away. Alternatively, you should allow your ball python to soak in a bowl of warm water.

Provide it with a small, shallow bowl of fresh water. Make sure that it can easily get out of the bowl on its own before you leave it to soak. It’ll ‘bathe’ for as long as is required, and should then find it easier to shed.

More regular twitching and spasming might be related to neurological issues. A head wobble, for example, is a condition that specific morphs of ball python have.

Essentially, the head wobble is where the snake can’t balance properly. When it’s offered food, its head wobbles back and forth. When it attempts to strike, it loses its bearings and misses.

The snake may also find it difficult to tell up from down. The only snakes that get head wobble are spider morph ball pythons, and any morph that includes the spider variation. These include the following:

There is no ‘cure’ for a head wobble as it’s a neurological condition.

According to the Journal of Virology, ball pythons can get Inclusion body disease. IBD is a relatively newly-found disease that is fatal.

It primarily affects boids, especially boa constrictors, but it can also affect pythons. Unfortunately, this means that ball pythons are also at risk.

It’s a neurological problem, meaning that it affects the snake’s brain and nervous system in the following ways:

Unfortunately, there is no cure for IBD. All you can do is quarantine your ball python to make sure that the disease doesn’t spread. It’s highly contagious and can kill all of your pythons and boas if you aren’t careful.

Isolate the snake in its own enclosure. Wash your hands before and after handling other snakes to prevent transmission, or wear disposable gloves.

With improper care, it’s easy for a ball python to get fat. Whether this is because you’re feeding it too much or too often, the symptoms are the same.

If your snake is overweight, you’ll notice:

If the snake is underweight, or has become anorexic, then you’ll notice these symptoms instead:

To help a ball python to stay healthy, check our care guide. We detail exactly how much ball pythons are supposed to be eating, whether they’ve just hatched or they’re 10 years old.

MLA Style: Carter, Lou. "What Are the Signs of an Unhealthy Ball Python? (with Video)" Snakes For Pets, (January 21, 2021), https://www.snakesforpets.com/signs-of-an-unhealthy-ball-python/.

APA Style: Carter, L. (January 21, 2021). What Are the Signs of an Unhealthy Ball Python? (with Video). Snakes For Pets. Retrieved January 21, 2021, from https://www.snakesforpets.com/signs-of-an-unhealthy-ball-python/