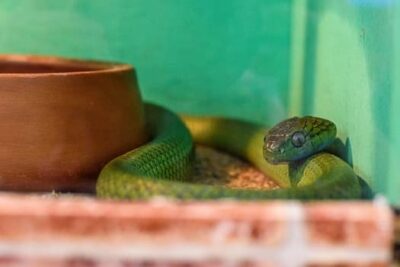 Snakes, like all reptiles, are cold-blooded (ectothermic). They depend on their living environment for warmth. This can be the natural warmth of the sun or an artificial heat source, such as a heat lamp. When a snake gets too cold, this will adversely affect its health and eventually result in death.

If a snake can’t find a basking spot to draw heat to raise its temperature sufficiently, its body will cease to function and its health will suffer. The snake will be unable to digest its meals, remove waste from its system, or maintain respiratory and circulatory function.

Vivariums need to be optimized for the species of snake, and have a ‘thermal gradient.’ This means that one end of the enclosure should be warmer than the other. For example, the basking spot for a ball python should be 90 degrees, and the ambient temperature should be 80 degrees.

Contents show
1 What Happens If a Snake is Too Cold?
1.1 Snakes Attempts To Get Warm
1.2 Regurgitation or Vomiting of Food
1.3 Snake Stops Eating
1.4 Snake Becomes Inactive
1.5 Illness, Sickness, And Disease
1.6 Death
2 What Temperature Is Too Cold for Snakes?
2.1 Can Snakes Survive in Snow?
2.2 Can Snakes Survive in Cold Water?

What Happens If a Snake is Too Cold?

When a snake becomes overly cold, it will noticeably alter its behavior. Here’s a table of symptoms in the order that you’ll see them:

Snakes Attempts To Get Warm

When your snake’s environment is too cold, it will seek out a source of warmth. If your snake’s enclosure has a basking spot, it will move towards this location and remain there for as long as required.

Snakes are cold-blooded. They cannot produce any body heat. If they can’t find a warm spot, their bodies will revert to the ambient temperature. If that temperature is particularly cold, then the snake will likely freeze.

If there isn’t a basking spot, the snake will try to avoid the cold. If it’s a burrowing snake, then it will enter its hide or burrow. This is an evolutionary adaptation that helps it avoid the cold, rain, and snow.

This won’t warm your snake up as much as a basking spot, but it may stop the snake from getting excessively cold and dying of hypothermia.

Regurgitation or Vomiting of Food

Because snakes are ectothermic, their digestive systems work differently to mammals. The bacteria in a snake’s gut can’t break food down.

A snake’s gut cannot digest food at all if it’s too cold. The food will start to rot, so the snake must remove the spoiled food from its system as soon as possible. So, it will regurgitate or vomit its food back up.

To be clear, there’s a difference between regurgitation and vomiting. Regurgitation is where your snake brings up food that it has only just eaten. The food will be whole and undigested. It’s brought up from the throat.

Vomited food is brought up from the stomach. Depending on how long it has been in the stomach, it may be not at all, partially, or completely digested. Both regurgitation and vomiting occur when a snake gets too cold.

If you have ever bred snakes, you will have noticed this when temperature cycling them. This is when you make the enclosure a little colder to simulate Winter, before warming it up again for Spring. This gets the snakes ready to mate. During this time, they won’t eat.

Your snake will only start to eat again when the temperature rises. Or, when it gets access to a basking spot, it may eat before sitting there.

If your snake doesn’t have anywhere to warm up, it will soon become lethargic. In some cases, it will stop moving for an extended period of time. And when it does move, it will move very slowly.

This process is commonly confused with hibernation. Snakes don’t hibernate (only mammals do). It involves the body temperature dropping and the heart rate/breathing rate dropping.

What snakes do is called brumation. This is like an extended period of rest. It’s similar to hibernation in that way, but without the heart rate slowing and the breathing rate dropping.

Snakes that brumate do so at about 60 degrees. Breeders suggest a temperature of 55 degrees for brumating corn snakes, for example.

To brumate, the snake needs a burrow. BioOne said that this burrow is called a hibernaculum (hibernating place). The snake will then sit in the burrow hardly moving until the temperature rises again.

It may occasionally move during the warmest part of the day, trying to find a sunny spot. But apart from that, it will be entirely inactive.

The problem is made worse because your snake won’t be eating. While warmth is essential for a healthy immune system, so is adequate nutrition. Without food, your snake will start to lose weight and become weak.

The snake will die of hypothermia if it remains cold for too long. This is a cumulative effect of various issues related to the cold temperature.

Its organs will stop working. The snake’s kidneys and liver are used to filter the blood of waste and toxins. The lungs take in air and absorb oxygen. These functions, and those of the rest of the snake’s organs, are vital to life. Without them functioning optimally, the snake is unable to survive.

Not surprisingly, snakes are extremely vulnerable when they’re weak and lethargic. If discovered by a predator when in a compromised state, the snake will be unable to move quickly or defend itself adequately.

What Temperature Is Too Cold for Snakes?

The temperature that snakes get too cold is species-dependent. All snakes start to react adversely to temperatures lower than 70 degrees Fahrenheit.

However, the exact requirements vary based on the species. Here’s a table explaining the temperatures that pet snakes need:

Can Snakes Survive in Snow?

Snakes cannot survive in the snow. If your snake sits somewhere snowy and frosty for long enough, it will freeze to death.

But that doesn’t mean that snakes can’t survive in places that get snow. Many snake species live far north or south enough that they encounter snow. They avoid it by hiding in burrows.

Crucially, the snake needs to burrow deeper than the frost level. This is the level to which the soil freezes. If the snake can stay beneath the frost level, it can survive. But if it’s surrounded by frost and frozen soil, it will die.

However, a tropical species like the boa constrictor can’t survive in snow. It’s used to higher temperatures and doesn’t know how to burrow. If it encountered snow, it would die. But species, like the timber rattlesnake, care used to cold winters and can hide in burrows.

Can Snakes Survive in Cold Water?

Cold water ‘feels’ worse than cold air. Water is a better carrier of heat than air. So, an animal’s body heat seeps out into the water quicker than it does air of the same temperature. This cools the animal down faster, which means that a snake will quickly die in very cold water.

While snakes have instinctive survival methods that can keep them alive, there’s a reason why you won’t find snakes living in colder countries. Snakes depend on their external environment for warmth. Without a heat source, snakes’ organs will not function and they will eventually die.

MLA Style: Carter, Lou. "What Happens When a Snake Gets Too Cold?" Snakes For Pets, (August 11, 2022), https://www.snakesforpets.com/snake-gets-too-cold/.