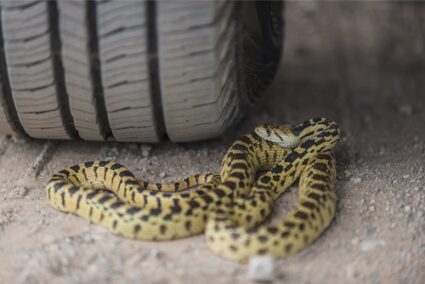 A snake that got into your car could cause damage or distract you while driving. If a snake is venomous, such as a rattlesnake or copperhead, then getting bitten could put your life at risk.

Snakes can get into cars through the undercarriage, an open door/window. The most likely points of entry are the engine, cabin, and trunk. Snakes like warm places because they’re cold-blooded.

You can keep snakes out of your car by not leaving your doors, bonnet, or trunk open and unattended. And, where possible, park your car in a garage to keep it away from wild animals.

Can a Snake Get Into Your Car?

Snakes can crawl up into people’s cars due to their size and shape. The easiest way for a snake to enter your car is if you leave them a way to get in. By leaving your door, trunk, or bonnet open, the snake can easily get inside.

But even if you don’t ‘open the door’ for them, so to speak, they can find a way in. The mechanics of today’s cars are covered by panels on the car’s underside. But even these panels don’t cover every angle and gap the snake can crawl into.

Older cars are more accessible from underneath. But a snake wouldn’t try to get into your car for no reason. There has to be something to entice them.

Why Would a Snake Crawl into Your Car?

As you can imagine, your car offers lots of places that fit this description. Under the bonnet, under the bodywork, or just underneath the car are all places that a snake can feel more secure.

Aside from that, cars also offer warmth. Snakes are cold-blooded (ectothermic) creatures. They can’t generate their own body heat, so rely on the warmth of their environment. Usually, they would look for a hot rock that has sat in the sun. But a warm engine is almost as good.

Can a Snake Get into Your Car from Underneath?

Snakes are thin and flexible enough that they can find gaps between your car’s parts and make their way up towards the engine bay. It’s here that they most prefer because of the residual warmth of the engine block.

What they can’t do is get into the cabin of your car from here. There’s no access route. It is possible for them to get inside the workings of your car where they can’t get out.

This is something that only happens infrequently. But when it does, you’ll need to call an expert. Reports of animals (rodents) finding their way inside the evaporator unit of a car’s air conditioner system show that it’s possible.

Signs of a Snake in Your Car

Snakes are good at hiding, and prefer being alone. There aren’t many obvious signs of snakes as they like to cover their tracks. However, you may notice the following clues:

If you find a snake skin in the car, it indicates that the snake has likely been there a while. Snakes only shed infrequently, once every 1-3 months, depending on the species.

Where Can a Snake Live in Your Car?

It’s not especially likely that a snake will get into your car. This isn’t something that will happen to you regularly. But if it does, these are the places you’re likely to find one.

Under Car Hood or Bonnet

This is where the engine is, so it provides plenty of warmth. It’s also dark and secure, so it’s like a burrow that a snake might hide in.

You don’t have to lift the hood for a snake to get under it. It could make its way up from underneath the car, making their way through the gaps between your car parts.

The issue with a snake living under your bonnet is that it may not be easy to find. It may be sat on top of your engine, in which case it’ll be right in front of you when you pop the hood. But it may be further down in the inner workings of your car.

As you can imagine, it would be fiendishly difficult to find a snake that’s desperate to hide somewhere around your engine. It can easily hide away, and you’d have to reach in to pull it out.

It might be best to leave that kind of job to a professional. But it’s vital that you do get it out, because if you don’t, it could cause a fire.

There’s likely nothing more frightening than the prospect of a snake dropping into their lap while they’re driving. But it can and does happen.

Admittedly, this is less likely if you live in an urban or suburban area. But if you live somewhere with lots of snakes (Texas, Florida, Tennessee, etc.), the odds go up. All it would take is for you to leave your car door open and unattended for a while for a snake to slither in.

The same applies if you leave your window open. You may not know, but snakes are good at climbing. Some snakes can climb vertical brick walls, even. It would be easy for them to climb through an open window and into your car.

The snake can’t get in the cabin of your car through vents or bodywork. They may explore these parts of the vehicle, but there’s no way they could get into the cabin from here.

It’s a nice, enclosed space. It may also be quite warm, especially if your engine is towards the rear end of your car. This is less likely because there’s no way in and out of the trunk.

Perhaps if you popped the trunk and left it unattended for five minutes a snake could get in. But otherwise, this probably wouldn’t happen.

Plastic fittings usually have one or two holes that the snake can get in and out of. So, for example:

Once inside, the snake can move around to their heart’s content without being disturbed. However, it’s difficult for them to get here. They have to get in the cabin first, which as we’ve covered, is difficult for them. They then have to find a hole to hide in.

Getting a Snake Out of a Car

The question of how to get a snake out of a car dashboard isn’t an easy one to answer. Snakes are tricky creatures and are good at hiding, too.

Depending on where you live, trying anything to get rid of the snake might not be a good idea anyway. If your area has venomous snakes, this could be one of them.

Will the Snake Go Away on Its Own?

By leaving the snake alone, you might encourage it to come out. With you around, it won’t feel safe coming out, but with you gone, it might consider leaving. But the snake might find somewhere new to live, moving from your dashboard to under your seat, for example.

It’s best to keep an eye on the snake so you know where it goes. At least lock the snake in so that it can’t escape, and call an expert to deal with the problem for you.

Can You Lure the Snake Out?

Snakes only go to places and do things if they have a reason. They don’t get in your car for the sake of scaring you. Rather, they probably got in your car because they needed somewhere warm to rest.

Why is this relevant? Because it shows us how we can get them out: by offering them something they’ll like. Snakes like to eat rodents, so you probably don’t have any food to provide it with.

But even if you did have something to lure the snake out with, you would have to handle it to get rid of it. That’s why it’s best to hire a professional to do this for you. They can lure the snake out and use a snake hook and snake bag to capture the creature.

Can You Use a Snake Trap?

It is possible to trap snakes, in the same way that you can trap other animals. All you need is a cage/trap and something to lure them into it.

Professionals may use humane traps that the snake can slither into but not out of. Because of the snake’s body shape, they’re even easier to trap than usual. You can trap them in a long, thin section of pipe.

How to Keep Snakes Out of Car

So, we know that snakes can get inside a car. We also know that they have reason to try and hide in one. But what we don’t know is why they might want to hide in there.

Here are some tips on how to prevent snakes from getting in your car. They’re all common sense, and don’t require you to do anything special. But if you live somewhere with venomous snakes, these tips could save your life.

Park Your Car in Your Garage

Keeping your car parked outside is the worst thing you can do. Your car is exposed to the elements, reducing its value over time, and it’s exposed to wildlife too.

Snakes are, of course, found outdoors. If you park your car and head indoors, the engine will still be warm for a while. This warmth will attract snakes, and potentially other animals too.

By parking in your garage, you make this far less likely. While snakes can and do get indoors, your car will at least be harder to access.

Deal with Your Rodent Problem

If you have a consistent snake problem, it’s probably because of a consistent rodent problem. Rodents are a snake species’ favorite food. That’s how corn snakes got their name: from spending a lot of time near corn and grain stores, because of all the rodents there.

You might be thinking “Well, I don’t have a rodent problem!” You may only not notice it because the snakes take care of it for you. According to Current Zoology, snakes that usually eat rodents in the wild don’t necessarily eat more than usual. But they will take advantage of a rodent population.

Hire an exterminator or set rodent traps to see if you do have an infestation of rodents. If you do, get rid of them, and you will see fewer snakes too.

Keep Your Pet Snake in Its Cage

It’s not just wild snakes that can hide inside cars. It’s pet snakes too. Pet snakes are not domesticated, and share the same instincts as wild snakes. So, if your pet snake got loose in the car, it’ll pose the same problems as a wild snake.

Many snake owners leave their snakes to move freely around their house. This is a bad idea, because it could end up hidden anywhere. It could get out of your house and terrorize your neighbors.

One place they can end up is in your car. Like wild snakes, they may be attracted to the warmth of the engine and the dark hiding places it offers.

This can happen with pet snakes that have been missing for a long time. Missing pet snakes usually don’t move far from their original home. They stay nearby if there are shelter and a food source.

You may find that your missing pet snake ends up hiding in your car. The only way to completely avoid this issue is by making sure your pet snake doesn’t go missing in the first place.

If you don’t want to get a snake through a car window, keep your window closed. The same applies to your door, your trunk or hood.