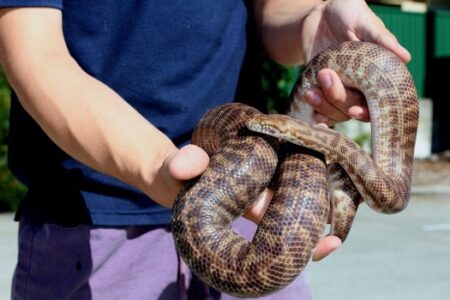 Snakes eat infrequently, so just 2-3 regurgitated meals in a row can lead to an unhealthy level of weight loss, or even anorexia. If your snake can’t keep its food down, this may be because it’s feeling stressed, it has an illness or disease, or because its enclosure has a low temperature.

Ball pythons, corn snakes, boa constrictors, etc. all require different ambient temperatures based on their natural habitat. A snake will be unable to digest food if it’s too cold, so make sure that its enclosure is sufficiently warm. Don’t just turn off your snake’s heat pad during the night. Avoid disturbing your snake after feeding as it needs to feel safe. Allow the snake 24-72 hours to digest its meal. A sick snake may regurgitate its meal, so it should be checked over by a vet.

If your snake is throwing up its food, you must determine if it has regurgitated or vomited. Regurgitation is a sign of suboptimal husbandry, whereas vomiting indicates that you have a sick snake. To fix the problem, you need to find out the reason why your snake is bringing up its meal.

Contents show
1 Difference Between Regurgitation And Vomiting in Snakes
1.1 Why Do Snakes Regurgitate?
1.1.1 Handling Shortly After Feeding
1.1.2 Stressful Situations
1.1.3 Eating Too Much Food
1.1.4 Wrong Heat And Humidity Settings
1.1.5 Gorging on Water
1.1.6 Breeding Season
1.1.7 Parasites and Illnesses
1.2 How to Care for a Snake After Regurgitation

Difference Between Regurgitation And Vomiting in Snakes

Snakes like to digest their food in a safe, secluded place. They know that they’re slower and more vulnerable during the digestive process. So, many owners don’t get to observe their snake immediately after its eaten.

If the owner returns to the enclosure several hours later to find some expelled food, it can be difficult to know if it’s regurgitation or vomit. However, it’s relatively easy to tell the two apart. Here’s how:

Regurgitation is not uncommon and can be prevented by reducing stress and improving the conditions in your snake’s enclosure.

Vomiting is uncommon and likely to be due to illness. Consequently, it should be investigated by a vet who is experienced with reptiles.

Why Do Snakes Regurgitate?

There are many reasons why a snake may regurgitate its food:

Handling can be a stressful experience. If your snake sees your encroaching hand as a physical threat, it will try to purge its stomach so that it is able to get away as quickly as possible.

Any stressful situation will prompt your snake to purge its stomach. If another pet enters the room, a child taps on its tank or another snake is added to the enclosure, you could find that this leads to regurgitation.

Eating Too Much Food

While some species seem to know their limits, such as garter snakes, others will keep eating food that’s offered to them until they literally cannot digest anymore, so it needs to be expelled. Ball pythons are known to overeat, which means that regurgitation is more likely to happen.

If your snake eats a rodent that is far too large for it, the bacteria present in the rodent will decompose itself faster than the snake has time to digest it. So, the snake will vomit up partially-digested food or risk being made sick by the decomposing prey.

If your snake’s living environment isn’t warm enough, you’ll find it difficult to get your pet snake to eat. None-the-less, a snake that’s living in suboptimal conditions may still consume its meal. However, the food will be regurgitated because its body temperature is too low to digest it.

The food will start to rot in the snake’s stomach. As a defense mechanism, it will vomit the partially-digested meal back up.

If your snake drinks too much water, it may end up regurgitating its meal. Rosy boas have a tendency to gorge on water, for example.

“Breeding season anorexia” is when a snake refuses to feed during the mating season. However, some evidence suggests that, in the wild, some snake species still eat small meals during this time.

Some breeders offer snakes small meals during the breeding season, and there’s a chance that the food will be regurgitated. This won’t be an issue if the snake continues to feed normally after the mating season is over.

Illness can cause digestive problems in snakes. This could be an internal parasite (cryptosporidiosis), viral condition, bacterial infection, or respiratory infection. Other clear signs that your snake is unwell include:

Consider whether you’re feeding it the correct portion size, and/or you’re keeping the vivarium warm enough.

Take your snake to a vet for an examination. Most illnesses, and some diseases, can be treated and cured if identified sufficiently early.

How to Care for a Snake After Regurgitation

If you do find regurgitated food in your snake’s tank, follow these steps:

If your snake is regurgitating food, it’s probably stressed, too cold in its enclosure, or over-full. If regurgitation happens after every meal, despite making adjustments, you should consult a vet for further advice.

MLA Style: Carter, Lou. "What To Do When Your Snake Regurgitates (Vomits) Its Food" Snakes For Pets, (January 21, 2021), https://www.snakesforpets.com/snake-regurgitates-its-food/.

APA Style: Carter, L. (January 21, 2021). What To Do When Your Snake Regurgitates (Vomits) Its Food. Snakes For Pets. Retrieved January 21, 2021, from https://www.snakesforpets.com/snake-regurgitates-its-food/