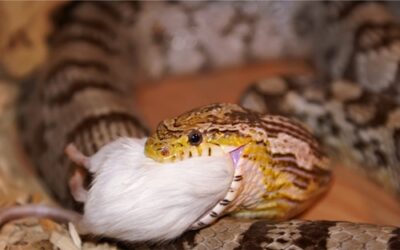 Never feed your snake pinkie, fuzzy, or adult mice that exceed the width of its body at the widest point. If you give your snake a mouse that’s too big, it could become stuck in the snake’s mouth/throat. A further concern is that your snake attempts to swallow the mouse the wrong way round, but that’s an issue that the snake can usually address on its own.

The snake will adjust the position of the mouse so that it’s no longer eating it sideways or backwards. If the mouse is too big, it can spit the prey up. It won’t choke because of its special organ, the glottis, which aids the breathing process during a snake’s meal. If the prey is stuck in the snake’s mouth for several days, seek veterinary assistance.

By feeding a snake the right-sized mouse, you can prevent these problems from arising. You need to know how to tell if a mouse is too big for your snake, and learn what will happen if there’s ever an issue. Usually, the snake will make adjustments if you feed it mice that are the right size.

Contents show
1 Can Snakes Struggle to Eat Prey?
1.1 Snake Eating Mouse Wrong Way
1.2 Snake Ate Mouse That’s Too Big
1.3 How Snakes Adjust to Prey That Gets Stuck
1.3.1 Snakes Regurgitate Their Food
1.3.2 Snakes Adjust Their Feeding Position
1.4 Can a Snake Choke on a Mouse?
1.5 What to Do If a Snake Can’t Swallow Prey

Can Snakes Struggle to Eat Prey?

If a snake’s prey is too large, it won’t be able to swallow it. Obviously, wild corn snakes can’t be too selective about what rodents they eat as they may not get a good opportunity to eat again for days, weeks, or months.

Consequently, non-captive snakes may try to swallow prey that is too big for their current size. And captive (pet) snakes will just try to eat whatever-sized mouse you feed them. So, you have control over their meal sizes.

Ideally, your snake should eat its prey head-first. Snakes are very comfortable eating something that’s long and narrow.

However, snakes are far less comfortable eating something that’s too wide. While snakes can extend their jaws wider than you might expect, eating a mouse sideways can present a problem.

Snakes have feeding reflexes. When a snake strikes its prey, this feeding instinct is triggered. The snake, if a constrictor, will not loosen its grip with its jaw as it coils around the prey.

The snake may have bitten the prey at the wrong angle. It would then have to adjust its jaws slightly so that it can eat the prey head-on. Snakes are, of course, capable of making these adjustments on their own.

A snake can get a mouse stuck in its mouth/throat when it’s fed prey that isn’t size-appropriate. A snake will just ‘try’ to eat whatever food that you give it when it’s feeling hungry, and that’s when you run into problems.

If the meal is too big, then there’s a chance that the mouse could get stuck. While this isn’t as much of an issue as you might imagine, you should avoid feeding your snake a mouse that’s larger than the biggest point of its body.

How Snakes Adjust to Prey That Gets Stuck

If the feeding process goes wrong, snakes have ways of dealing with this problem on their own. These ‘adjustments’ are as follows:

Let’s imagine that you try to feed a rabbit to a boa before it’s quite big enough to swallow it. The snake will recognize it as prey, and it will be small enough for the boa constrictor to try to eat.

But it may be too big for the boa to swallow. If that happens, the snake has a built-in regurgitation mechanism. When a meal is too big for it to swallow, it’ll bring it up again. It will know how to do so without any assistance.

If the snake bites the side or rear of a mouse, this will make swallowing it far more difficult. So, once the prey has been subdued, the snake can start to change its feeding position.

The snake will release the prey, but only slightly, and bite down again in a (hopefully) more favorable position. It will continue with this until the snake is biting the prey by its head rather than anywhere else.

Can a Snake Choke on a Mouse?

It’s possible for prey to get stuck in the mouth, but it isn’t possible is for a snake to choke on its prey. Snakes have an organ called the glottis, which is located at the top of their windpipe inside their mouth.

When the snake’s mouth is closed, the glottis is moved up through the mouth and sits against the nostrils. This allows the snake to breathe.

But it’s when the snake is eating its rodent meal that the glottis comes in particularly handy. The snake will poke its glottis out from the side of its mouth when eating a big meal. The snake can continue breathing even when eating a large meal, or eating a meal for a long time.

If the prey is stuck fast and won’t come out for many days, then this would put pressure on the snake’s respiratory system. It may eventually choke because it isn’t getting enough oxygen.

What to Do If a Snake Can’t Swallow Prey

Leave your snake alone with the mouse for a while. New snake owners may mistakenly believe that prey should immediately go to its belly, but that’s not actually the case.

It takes its time for food to go from the snake’s neck all the way down along its esophagus. The digestive process in snakes is long and complex.

If you leave your snake to its own devices for a while, the prey will usually be swallowed and it will gradually move down its body. Once in its stomach, the snake will have no problem digesting the mouse.

Feeding your snake mice that are too big should be avoided. Just give the snake a mouse that’s the size as its mid-section or smaller. If your snake tries to eat prey the wrong way round, it will make adjustments.

If prey has been lodged in your snake’s mouth for days and the snake has been unable to resolve the issue on its own, you should take it the vet.