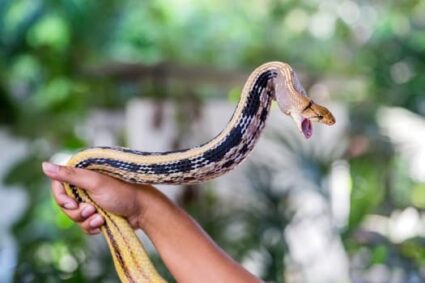 There are many fascinating things to learn about snake teeth, from how snake fangs work, to what size and structure snake teeth can have, to where the snake’s flexible jaw comes from evolutionarily.

Snake fangs can either be hollow or grooved to allow for the injection of venom. Not all snake teeth are venomous fangs. Some snakes hold on for a while after they bite down on their prey, while others bite quickly and release. Some species of water snake have been observed using their teeth to rip their prey into smaller chunks to more easily swallow. Snake teeth can fall out often after they bite, though replacement teeth will quickly grow to take their place.

These are just some of the cool facts you can learn about snake teeth. It’s time to explore how a snake’s teeth and fangs work.

From their structure, to their size, to their use, there’s a lot of variety in the way that a snake’s teeth work. Here are some little-known facts about snake teeth and fangs that may surprise you.

The gaboon viper of Africa, scientific name Bitis gabonica, has fangs that are over 2 inches long. This snake can grow to around 6 feet in length and produces more venom than any other known venomous snake.

Scientists have been hard at work trying to understand how snakes evolved their highly flexible jaws for a long time. Most other reptiles do not have this kind of jaw, as their skulls are more rigid.

According to the journal Nature, an extinct marine lizard called a mosasaur may hold the key to understanding how snakes evolved. These large swimming reptiles have flexible lower jaws like a snake, and they also had snake-like palatal teeth.

These features were unique among lizards of the time. However, mosasaurs also had an upper jaw which was as rigid as you would expect from a lizard or another non-snake reptile.

Most Snake Fangs Are Hollow

While all known snakes have teeth, only venomous snakes have fangs. Usually, these fangs are not solid teeth but rather hollow conduits. The venom produced in the snake’s salivary glands is stored in sacs behind the snake’s eyes. When it is needed, the venom is transported through the snake’s face and into the base of the fangs.

When a venomous snake bites its victims, the venom flows through the hollow center of its fangs, and the snake injects the venom into its victim’s body. In this way, the fangs function similarly to a doctor’s needle when they give you a shot.

Other Snake Fangs Are Grooved

While hollow fangs are the most common type of snake fangs, other snake fangs are not like hollow tubes. These are known as grooved fangs.

Snakes with grooved fangs are not as effective at injecting venom into their prey, but they do still manage to use venom to their advantage.

Not All Teeth Are Venomous Fangs

Not all snakes are venomous. Not only that, but there are four main types of snake teeth. Aglyphous teeth are usually found in non-venomous snakes. These teeth match each other in their size and shape.

If you look in the mouth of a snake with aglyphous teeth, you will not find any distinct fangs. However, you should still be careful around these snakes in case they decide to give you a painful bite.

Some Snakes Only Have Venomous Fangs

When you imagine a venomous snake with its fangs visible, you are imagining this kind of snake teeth structure. These snakes’ fangs are downward pointing, short, and hollow. If they have any other teeth in their mouth, they are small and negligible.

Dangerous Teeth Are At The Back

Those back teeth are also the snake’s venomous fangs – grooved to allow for the channeling of venom. This means that these snakes need to move their prey all the way to the back of their mouth in order to inject any venom.

The final category of snake teeth belongs to the snakes which are most dangerous to humans, such as rattlesnakes and other vipers. These teeth are referred to as solenoglyphous teeth.

When a snake with solenoglyphous teeth first opens its mouth, you may not see any fangs. This is because the snake’s fangs rest folded up against the roof of the snake’s mouth, out of sight.

When the snake needs to bite down on its prey, it brings down its fangs quickly and decisively. Then the snake folds its teeth away again, so that it will not harm itself by accidentally biting its own tongue.

Some Snakes Hold On Tight When They Bite

In order to inject its venom, some species of snake will hold on for a while after they bite. This may only be for a few seconds, but every second counts for both the snake and the victim in this dangerous situation.

Snakes that held on for longer usually have proteroglyphous teeth, such as cobras. The length of time they hold on allows them to inject more venom into their prey. Larger prey will require more venom to be injected in order to slow it down enough for the snake to eat.

Snakes with solenoglyphous teeth do not need to hold on to their prey for a long time. When they bring their fangs down from the roof of their mouth, these snakes are able to inject a large amount of venom at a rapid rate. This is part of what makes snakes like rattlesnakes so dangerous to humans.

Eastern green mambas are another species of snake that does not need to hold on for a long time when they bite. These venomous snakes deliver their venom to their prey through a quick series of bites, grabbing and releasing their prey multiple times. This makes eastern green mambas capable of injecting a large amount of venom into its prey very quickly.

When a venomous snake bites down, it does not always inject venom. Snakes can only store so much venom in their body at a time. So, after a certain number of injections, it can and will run out of venom. Then the snake will need to take time to recover and produce more venom again.

Aside from this, sometimes venomous snakes simply will not channel any venom when they use their teeth. According to the University of Southern California School of Medicine, nearly 20% of all bites from venomous snakes do not result in their victim’s envenomation.

The snake has bitten its prey, but it has not included any venom. There is an active debate in the scientific community about whether or not this is a conscious choice on the part of the snake.

Snakes Have Several Types Of Teeth

The first type is a recurved tooth. This tooth has a shallow s-shape and allows the snake to ensnare its prey.

The second tooth type is a curved tooth, shaped like a crescent moon. The curved teeth allow the snake to move the prey around inside its mouth.

The third type of tooth is the straight-tipped linear tooth. These teeth are what the snake uses to penetrate its prey.

Snakes Do Not Chew

Snakes do not have the required muscles for chewing. Instead, snakes use their flexible jaws to swallow their prey whole.

However, sometimes snakes are observed doing a behavior similar to chewing. Snakes with opisthoglyphous teeth need to get their prey to the back of their mouth in order to inject it with venom. This results in a mouth motion which resembles chewing in other animals.

Some Snakes Rip Their Food Apart

Water snakes, including the beaked sea snake, do not chew their food, just like their land-based counterparts. These sea snakes can also wrap their greatly flexible jaws around food of nearly any size, even fish which are twice the width of the snake’s own body.

Sometimes these snakes have been observed using a creative method to get around their inability to chew. Rather than swallow all of their prey at once, beaked sea snakes will sometimes use their teeth to rip their prey into smaller chunks and swallow these chunks one at a time.

Sometimes when a snake bites, it ends up losing a tooth. If the prey moves away with a strong, sudden movement, it can take the snake’s tooth along with it.

On occasion, snake teeth are found among the snake’s feces as well. The snake bit down so hard that the tooth broke off when it swallowed, going through the digestive system along with the meal.

This tooth loss is not always painful for the snake. Snake teeth will wear down and loosen over time, making it easier for the tooth to fall out. This tooth loss can leave the snake defenseless for a time, putting the snake at risk of going hungry.

Given that it is common enough for snakes to lose their teeth, it is a good thing that snake teeth grow quickly. A replacement tooth is always on the way. This makes it so the snake can survive losing its teeth, and it does not need to depend on older teeth that have worn down.

There are times in which a snake’s new tooth grows in so quickly that the old tooth has not actually fallen out yet. This gives you a snake that has three or four fangs instead of the usual two.

Snake Venom Can Be Milked

Milking is the process of extracting venom from a snake’s fangs. This venom is then used for a variety of scientific and medical purposes.

For example, milking a snake is an important part of the process of creating antivenom. Antivenom is a doctor’s best defense to cure a snake bite.

The extracted venom is injected into another animal, often a horse. Then, the horse’s plasma is extracted and used to create the antivenom, saving human lives.

There are so many interesting facts to learn about snake teeth. Understanding snake teeth can help you appreciate the diversity and inventiveness of the snake world.