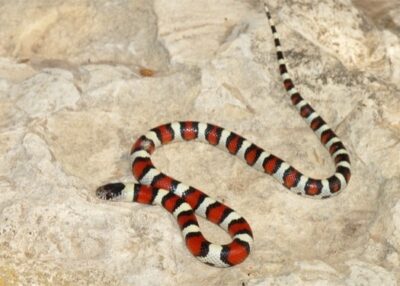 America is home to a small number of snakes with a deadly bite, such as the coral snake. Backyards play host to many types of snakes, and the vast majority of them are totally harmless. But there are venomous snakes in the U.S., and, unfortunately, there are some coral snake look-alikes.

Scarlet kingsnakes, Sonoran shovel-nosed snakes, red rat snakes, and Florida scarlets are snakes that look like coral snakes. The coral snake has round eyes and face. These are physical characteristics associated with non-venomous snakes, which makes identification difficult.

You need to be able to tell the difference between a coral snake and a non-venomous snake to avoid danger. Of course, if you are unsure what kind of snake is confronting you, you should always slowly walk away. The issue is that snakes are very good at camouflaging themselves in piles of leaves.

How to Identify a Coral Snake

When you’re attempting to identify a poisonous coral snake, you should keep a safe distance because a coral snake is highly venomous.

Because various non-venomous snakes look similar to a coral snake, a rhyme was created to keep everyone safe:

“Red touching yellow will kill a fellow, But red touching black is safe for Jack.“

This rhyme is based upon the colors of the coral snake. The scales on the back of a coral snake are red and black, with yellow bands. Hence, red touching yellow will kill a fellow.

Both the scarlet kingsnake and Florida scarlet snake, however, have black bands. This explains why red touching black is a friend of Jack.

Is This Rhyme Always Accurate?

If you encounter snakes with red, yellow and black markings in the wild, remember the words of this rhyme! However, if you suspect that it’s not a coral snake that you encounter, do not engage it in any way.

Wild, non-venomous snakes will be frightened of you, and will not want to interact. Attempting to handle one will result in you being bitten.

It’s also possible that you’ll fail to identify a snake correctly, even if you think that you’ve got everything right. Here’s how:

Each of these snakes is non-venomous to humans, but could easily be mistaken for a coral snake. This causes people to panic.

Snakes are nervous by nature and avoid predators at all costs. Snakes that do not have fangs or venom feel particularly exposed in the wild.

Batesian mimicry is a natural defense mechanism used by harmless snakes. If these non-venomous snakes are able to convince predators that they are dangerous due to their colors, they are more likely to be left alone.

It’s understandable that scarlet kingsnakes are mistaken for coral snakes. In terms of color schemes, these two snakes are almost identical. The differences in appearance are as follows:

Scarlet kingsnakes are harmless and largely shy. They will often set up home in rotting trees and under the bark. Naturally, this means they prefer humid temperatures. They are most populous in Florida, Georgia, Alabama, South Carolina, and North Carolina.

The Florida scarlet snake is another coral snake lookalike. As the name suggests, these snakes are often encountered in the sunshine state.

Geography is the biggest difference between this breed and the similarly-named scarlet kingsnake. Florida scarlet snakes are deep red in color, with yellow and black bands on their scales.

However, the color shades are a little more muted. In fact, some Florida scarlet snakes will have white bands as opposed to yellow.

A Florida scarlet snake’s tail also has three colors: black, white, and red. Coral snakes have just two colors: black and yellow. This type of snake also has a pointy red nose, rather than a black nose.

Like coral snakes, these snakes like to burrow and live underground. Coral snakes usually dwell within forests and farmland.

Unfortunately, this snake defies the coral snake rhyme. The Sonoran shovel-nosed snake has markings of black, yellow and red – with the latter two shades touching. It’s not venomous, but may produce mildly toxic saliva.

The easiest way to identify this snake is the distinctive large, flat snout. This will be yellow in color, rather than the black of the coral snake.

The red rat snake is a variant of the corn snake. This means that this species is entirely harmless. You’ll find them all over the country, in all weathers.

Red rat snakes are mistaken for coral snakes due to their coloring. They often have red and yellow scales, but they don’t usually have black bands.

Coral snakes are very shy and private. It is unlikely that one of these snakes will ever seek you out to attack. The problem is that coral snakes hide in woodpiles, rock piles, brush piles, trees, and tall grasses. Be extra careful when working in your yard, or walking/hiking, in these types of areas.

You’re most likely to encounter a snake that looks like a coral snake, such as a scarlet kingsnake, Sonoran shovel-nosed snake, red rat snake, or Florida scarlet snake. But it’s well worth learning the ‘coral snake rhyme’ as a precaution. Always keep a safe distance from wild snakes.