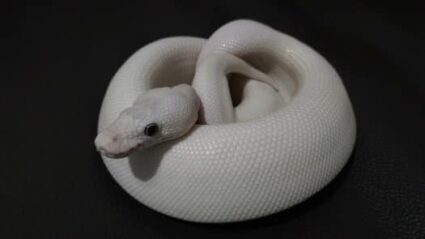 Most wild snakes have black, brown, or yellow eyes. Blue eyes are rare, because they require a reduction in melanin (dark pigment). Most blue-eyed snakes are the result of selective breeding for genetic mutations.

All snakes’ eyes appear blue occasionally, regardless of their natural color. This happens during the ‘blue phase’ of the shedding process. It’s an illusion created by a milky fluid underneath the ocular scales.

What Kind of Snake Has Blue Eyes?

A snake’s eye color is determined by pigments called chromatophores. These are special cells that reflect certain colors of light. For example:

These pigments work together with the structure of the iris to determine eye color in snakes. Different species of snakes may have evolved different eye colors depending on what time of day they’re active.

Blue is a color rarely seen in snakes. For a snake’s eyes to be blue, there must be a low level of melanin present in the iris. But if there’s no melanin at all, the eyes will appear pink or red. This is why albino or amelanistic snakes have red eyes, according to Scientific Reports.

There are a few species of snakes with naturally blue eyes. But most snakes’ eyes, in their wild coloration, are a shade of brown or yellow.

By taking advantage of random genetic mutations, snake breeders have managed to create snakes with blue eyes. The most popular blue-eyed snakes are blue-eyed leucistic ball pythons. They are pure white, with bright blue eyes.

What Are Blue-Eyed Leucistic Ball Pythons?

Leucism is a genetic mutation that reduces the amount of melanin (dark pigment) in the body. In ball pythons, it creates a patternless, pure white snake. But unlike in amelanism and albinism, the eyes retain some melanin.

Pairing any of the above morphs has a 1 in 4 chance of producing a BEL. You can also breed a butter with a butter, for example. Breeding a phantom ball python to a lesser or butter can also produce a BEL.

Along with ball pythons, other snakes come in blue-eyed leucistic morphs. These include reticulated pythons, Burmese pythons, and Texas rat snakes.

There’s no such thing as a blue-eyed leucistic corn snake (yet). However, Palmetto and Ultramel Anery corn snakes have blue eyes.

Not all snakes with blue eyes are the result of selective breeding or designer morphs. Some species of snake naturally have blue eyes, as part of their wild coloration.

Most snakes with naturally blue eyes are nocturnal. This could be because blue eyes are more UV-sensitive, so they allow more light to reach the retina.

The eyes of an emerald tree boa are usually yellow, blue, or pale green. It depends on how much yellow pigment is present in the iris. Yellow-eyed specimens typically also have a yellowish tint to their green scales, while blue-eyed boas are more blue-green. All emerald tree boas have thin, vertical slit pupils that can widen and narrow depending on light levels.

Emerald tree boas can be kept as pets, although they are not a beginner species. Though they’re nonvenomous, emerald tree boas have long, fang-like teeth. A bite from one could be extremely painful.

Green tree pythons look similar to emerald tree boas, but they aren’t closely related. They’re examples of convergent evolution – two species evolving similar traits independent of one another. Green tree pythons are also nocturnal and arboreal, and spend most of their lives in trees.

Green tree pythons usually have yellow, green, or grey eyes. However, some individuals’ eyes have a bluish tint. This is particularly likely to occur in “high blue” green tree pythons, which have blue-tinged scales, too.

High-blue green tree pythons are beautiful, but extremely rare. Most images of them have been edited to make their color appear more intense.

The rainbow boa is a terrestrial constrictor snake, native to Central and South America. The most common subspecies is the Brazilian rainbow boa, though there are 8 others.

Rainbow boas are orange in color, with dorsal blotches surrounded in black. But their scales have a mysterious iridescent sheen, like an oil slick. In certain lights, they look like they’re glowing with rainbow colors.

Their eyes, though, are not as colorful. Most rainbow boas have black or grey eyes. However, lighter-colored individuals have paler eyes that can appear bluish.

Rainbow boas can be kept as pets, but they have demanding needs. Due to their tropical habitat, they require a high humidity level of above 70%.

A bush viper’s highly keeled and spiky scales can be red, black, orange, yellow, green or even turquoise. Their large eyes, with thin slit pupils, have a beautiful marbled appearance. Their eyes can be blue, green or yellow, mottled with black.

African bush vipers are arboreal species, and live in dense rainforests. No antivenom exists for their bites, so while they may be beautiful, they’re also deadly. Their venom is hemotoxic, causing blood clotting and hemorrhaging.

There are over 50 different species of rattlesnake spread across North and South America. Most species have brown or copper eyes, but some rattlesnakes’ eyes are gray or blue.

Rather than being one solid color, many rattlesnakes have several colors in one eye. There’s also a wide variation among subspecies and individuals.

Albino and leucistic rattlesnakes are rare, but have been documented both in the wild and captivity. They typically have light-colored eyes (pink, orange or blue).

Yellow-lipped sea kraits are bluish-grey in color, with black bands and pale yellow lips. Their eyes are one solid color, which can range from clear sky blue to deep sapphire blue.

These snakes are native to the eastern Indian Ocean and western Pacific, including most of Southeast Asia and Oceania. Being semi-aquatic, they spend most of their time in water.

The bite of a yellow-lipped sea krait is highly venomous. It can cause paralysis, convulsions and fatal hypertension. According to the Journal of Proteomics, their venom contains several kinds of neurotoxins and cytotoxins. So, it’s best to admire their beautiful eyes from a distance.

Why Do Snake Eyes Turn Blue?

No matter what color a snake’s eyes are, they’ll occasionally take on a bluish, cloudy appearance. It’s called the blue phase, or “being in blue”, and it’s part of the shedding process. This may startle first-time snake owners, but it’s completely normal.

Snakes enter the blue phase when they’re preparing to shed. Milky fluid builds up underneath the old skin, helping to lubricate it. This allows the old layer of skin to separate from the new layer underneath.

Snakes have scales all over their bodies, including their eyes. The scales covering a snake’s eyes are called ocular scales (also known as spectacles, or eye caps). According to BMC Veterinary Research, ocular scales protect snakes’ eyes from damage, as snakes have no eyelids.

Because ocular scales are transparent, you can see the fluid underneath when a snake is in blue. That’s why the eyes appear blue and cloudy. At the same time, the snake’s skin will look dull and the colors will seem muted. In some snakes, the belly also gets a pinkish hue.

After 3-5 days, the blue phase will end, and the snake will look normal again. Around 48 hours later, it will shed its skin.