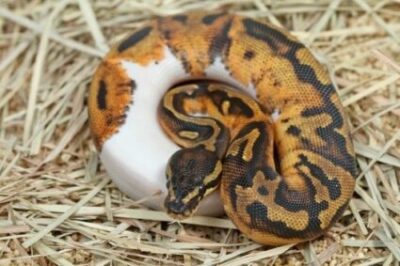 Spider ball pythons are one of the most common ball python morphs. But their wobble syndrome can prevent them from feeding properly, and ‘may’ decrease their quality of life. That’s why some breeders refuse to breed spider ball pythons. It’s become a big ethical question for many.

It’s perfectly legal to breed the spider ball python, but organizations like the IHS prevent them from being sold at their events. Many breeders believe that they should be banned due to their neurological issues (head wobble syndrome). Others disagree as spiders can still mate, eat, and live, just like other royal pythons do.

We’ll cover everything you need to know about spider ball pythons. That includes basic spider ball python info, how the spider gene works, and the neurological problems that they have. Then you can decide for yourself whether you should own and breed them.

What Is a Spider Ball Python?

A spider is one of many ball python morphs. A ball python color morph is a particular kind of snake that looks a certain way. Albinos, BELs, bananas, and spiders are all examples of popular morphs.

These changes are created through genetics. Breeders import snakes that look a certain way in the hope that they have unique genetic changes. If these changes are genetic and get passed to offspring, they are sold as a completely new morph.

Spider ball pythons have a different pattern to regulars. Their dark pattern is thinner than usual, and stands out clearly against their background color. Their color is roughly the same as an ordinary ball python. Also, their undersides are light, more so than a normal ball python.

However, there are some significant genetic issues with the spider ball python. It has a condition called ‘head wobble syndrome’, which makes its head wobble uncontrollably. The wobble gets passed on to any offspring that has spider genes, pure spider or not.

Because of the wobble, some experienced herpetologists feel that it’s cruel to breed spider ball pythons. Others have no issue with the wobble.

Is The Spider Ball Python Banned?

You are still allowed to breed spider ball pythons. There’s nothing to stop you from doing so, apart from your own personal concerns. There are no state or federal laws that prevent you from breeding them.

However, there are good reasons why you should consider not breeding them. The neurological issues can be severe, which may lead to a significantly decreased quality of life.

There’s not much merit, even from a purely financial perspective. Spider ball pythons have become so common that you likely won’t make much money from breeding them.

The International Herpetological Society (IHS) is a group that primarily operates in the U.K., and have done since 1969. They also have branches all over the world. The IHS does many things, including:

They’re a reasonably large organization with many members. Plus, because they promote research and publish their own journal, their word has a great deal of weight in the industry. In 2017, the IHS decided to ban the sale or collection of spider ball pythons at any of their events.

Also, they banned jaguar carpet pythons and enigma leopard geckos, which have similar issues. At the same time, the FBH (Federation of British Herpetologists) took the same decision. It took effect in 2018.

They reasoned that they had ‘looked at depth into the concerns that have been brought to our attention concerning the genetic issues of these animals.’ It was this that led to their decision.

The spider ball python’s neurological problems are the only reason why some people don’t like them. The belief is that it’s cruel to breed snakes that have such a severe issue.

But other breeders don’t take issue with spiders because they can eat, go to the toilet, shed, and breed just fine. Let’s look at the problems that a spider ball python has, and you can make an informed decision on your own.

According to the Journal of Exotic Pet Medicine, spiders have a condition called ‘wobble syndrome.’ This is where the snake can’t control its head and stop it moving from side to side.

The obvious symptom is the wobble, but they will also experience difficulty striking at prey. When they try to strike at prey, they may miss. They will eventually hit the target, but feeding is significantly more difficult.

Some spiders will have an awful wobble, to the point where they can hardly feed. Others will have a barely noticeable wobble that doesn’t cause them any trouble. Some breeders cull spiders that have particularly bad wobbles.

Why Do Spider Ball Pythons Have a Head Wobble?

Like all snake morphs, spiders have gone through a slight genetic change. Their color and pattern are different from a normal ball python because breeders selectively bred them for specific genes.

However, genes commonly have more than one effect. The genetic change that causes a spider ball python’s color and pattern have other effects, too. Among these effects are the head wobble and poor coordination.

It’s not entirely clear why these genes have the effect they do. What is known is that the head wobble is a neurological condition. This means that it affects the brain.

No research has been done on whether the wobble has any other effects. What is clear is that spiders can still eat, breed, explore, and interact with their owners, just as other snakes can. The gene doesn’t seem to have other neurological effects, either.

The head wobble is incurable. No medication or food will help you spider ball python to stop wobbling. They have been bred for decades, and nobody has yet come up with a solution. It’s unlikely that they will find an answer.

Can You Breed a Super Spider Ball Python?

Breeding two spider ball pythons together won’t produce viable super spider offspring. No breeder has reported a ‘living’ super spider. This is due to the following reasons:

Many breeders have tried to create a super spider. If they did, and could prove it was a super spider, they could make lots of money. The fact that no breeder has made this claim means that it hasn’t happened.

Why Is the Super Spider Ball Python Lethal?

A sable ball python is another morph that has spider ancestry. When you breed one with a spider, some of the offspring is viable. However, they have a severe wobble which can be deadly.

Some breeders believe that it isn’t lethal. Instead, they think that an unidentified issue with their genetics means that the genes can’t be passed on correctly. This is the only morph where this issue exists.

Should You Breed Spider Ball Pythons?

There are good health reasons why you should avoid breeding spiders. But the snakes are usually fine, aside from their head wobble, of course.

As for owning one, the experience is the same as owning any other ball python as a pet. The only reason not to own one, without breeding, is if you think the wobble lowers their quality of life.