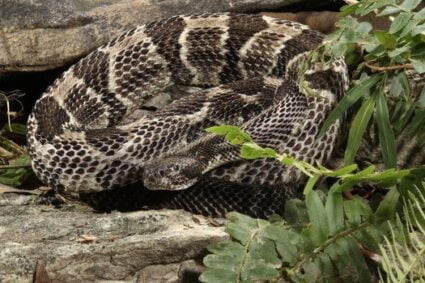 All across the wilds of the eastern United States, the timber rattlesnake roams. This snake is known for its dark banded appearance, its iconic warning rattling sound, and its dangerous venomous bite.

A timber rattlesnake can grow up to 6.25 feet long, with average lengths between 3 and 5 feet. Its fangs are between 2.6 and 3.8 millimeters long, and its venom contains hemotoxins and neurotoxins. This venom causes a range of harmful effects on humans. Timber rattlesnakes face many dangers in the wild, including snake fungal disease.

How Dangerous Is a Timber Rattlesnake?

Let’s start with some basic timber rattlesnake stats and information:

The timber rattlesnake species has a lot of color variations, but the 2 most common patterns are known as the black morph and the yellow morph.

A male timber rattlesnake is heavier than a female. The male usually has a much longer tail than the female as well.

Where Does This Rattlesnake Live?

The territory of the timber rattlesnake ranges across the eastern United States. They are found along the coast from New England to northern Florida, and as far west as eastern Texas and Minnesota.

A timber rattlesnake makes its home in forests, rocky hills, and swamps. It prefers dens in the cracks and crevices of rocky cliffs.

When Is This Rattlesnake Active?

Like other rattlesnakes, the timber rattlesnake has solenoglyphous teeth. These teeth feature two hollow fangs at the front of the jaw. The rattlesnake’s fangs are attached to a kind of hinge in the mouth, and so they can rest against the roof of the snake’s mouth, folded safely away. This makes it so the snake does not accidentally bite itself.

The timber rattlesnake may leave behind one or two puncture marks from its fangs after a bite.

What Does This Snake Eat?

The timber rattlesnake will inject its prey with venom and then wait for its prey to die. Once the prey is dead, it will swallow its prey whole.

How Likely Is a Rattlesnake Bite?

A timber rattlesnake is more likely to try to hide or flee if it hears or smells a human coming. It may also try to scare away the human with a defensive threat display. Biting is a last resort.

If provoked, a timber rattlesnake will not immediately bite. Its first response is to perform a threat display. This behavior includes lifting up its body from the ground, forming an S-shape with its head and neck. The snake will also hiss at the threat, vibrating its tail to create the distinctive rattling sound that rattlesnakes are famous for.

When a timber rattlesnake bites down, its fangs inject a powerful venom into its victim. This venom is toxic to humans. Let’s learn more about this rattlesnake’s venom and the consequences of getting bitten.

What Kind Of Venom Is It?

Different snake venoms have different effects on the human body. According to BMC Genomics, the exact composition and effects of a timber rattlesnake’s venom vary depending on the individual snake.

Hemotoxic venom alters the body’s ability to coagulate blood. When a human is wounded, the blood will usually clot itself to keep you from bleeding to death.

The hemotoxins in a timber rattlesnake’s venom prevents coagulation. It also reduces platelet numbers, making it difficult for the body to close up other wounds later. Hemotoxins keep the bite wound from healing and in severe cases will cause internal bleeding and hemorrhaging.

Hemotoxins also cause necrosis, or cell death. This may result in the skin around a timber rattlesnake bite appearing blackened.

Neurotoxic venom attacks the victim’s nervous system. It uses chemical signals to prevent neurons from communicating with each other.

Communication between neurons is how the human body’s muscles know how and when to function. Disrupting that communication can cause muscle spasms and paralysis. It can also lead to difficulty breathing or cardiac arrest.

Early symptoms of envenomation after a bite may include the following:

Why Do Timber Rattlesnakes Have Venom?

Venom is basically the timber rattlesnake’s saliva. However, this is saliva that performs multiple useful tasks for the snake’s survival.

A timber rattlesnake cannot hold onto its prey effectively. It only has its mouth to grab with, lacking any hands or claws. If it does not kill its prey with one bite, then the prey may fight back and hurt the snake.

The venom also works to begin digesting the prey before the snake has even swallowed it. Digestion is a long process for a timber rattlesnake. It does not chew its food; rather, this snake swallows its meals whole. Timber rattlesnake venom beings to break down the prey much like chewing would, helping the snake to digest its meal.

Venom is also the timber rattlesnake’s primary defense against threats. Any would-be predator knows that a snake which makes that iconic rattling sound should not be messed with.

Timber rattlesnake antivenom is made from the venom itself. When administered to an envenomated patient, the antivenom stops the effects of hemotoxins and neurotoxins.

When Antivenom Is Not Enough

Antivenom successfully stops the progression of a timber rattlesnake’s venom’s harmful effects. However, it does not repair all of the damage that the venom caused to the victim’s body. At this point, further medical treatment will be necessary.

Here are some examples of the harmful effects of timber rattlesnake venom which antivenom is not quite enough to fix.

According to the journal Annals of Emergency Medicine, antivenom treatment only cures some of the venom’s hemotoxic effects. Antivenom reverses the anticoagulant effects quickly and reliably, allowing the victim’s blood to begin clotting again.

However, the venom also causes thrombocytopenia – a reduction of platelet numbers in the victim’s blood. Platelets are another part of blood clotting. Antivenom treatment does not raise platelet numbers again, and so additional medical treatment after antivenom dosing may be necessary.

While the reason for this is unknown, it is possible that there is a factor in the venom which the antivenom does not neutralize, allowing the thrombocytopenia to persist.

According to the American Academy of Neurology, timber rattlesnake venom can often cause myokymia in the victim’s face or limbs. Myokymia is an involuntary quivering of muscles, not enough to move a limb but a motion which is out of the individual’s control.

As the venom attacks the victim’s nervous system, it increases the excitability of peripheral nerves across the victim’s body, causing this quivering or twitching motion.

The timber rattlesnake does not spread diseases to humans. However, this snake is itself vulnerable to some diseases.

Snake fungal disease is transmitted when a timber rattlesnake comes into contact with an infected snake or the fungus itself. The snake will develop skin discoloration around the infection site. The fungus will gradually penetrate the snake’s skin, creating painful lesions.

These lesions can be on the snake’s face, making it difficult for snakes to catch and eat their prey. The fungus also gradually weakens the snake’s immune system, making a timber rattlesnake vulnerable to other diseases.

Sometimes the fungus is contained within the snake’s skin. Then the snake is able to shed its skin and with it get rid of the infection. However, if fungal stalks remain on the snake after the skin is shed, the infection will return. Snake fungal disease is often fatal to timber rattlesnakes.

Threat To The Timber Rattlesnake

Local governments work to protect the timber rattlesnake by creating bans on the commercial sale of this snake, as well as banning people from making bounties on these snakes. State and national forests are also hard at work to conserve these powerful reptiles.

Why Care About The Timber Rattlesnake?

We encourage you to take this information about timber rattlesnake dangers to heart, so that you do not get harmed by their venom or bites. At the same time, be sure to appreciate this vital animal from a safe distance.