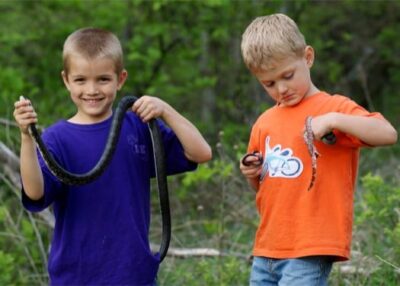 The idea of feeding a snake vegetables, rather than mice or rats, might sound very appealing. But unfortunately, there are no snakes that eat plants. Every species of snake needs to eat animals to survive.

All snakes are obligate carnivores, which means they only eat meat. Snakes have short intestinal tracts, and cannot digest or extract nutrients from plant matter (e.g. vegetables). Most pet snakes must be fed live or frozen whole rodents, such as rats or mice. However, some species can survive on insects, fish, and eggs.

There’s no such thing as an herbivorous snake. But if you consider eggs to be suitable for vegetarians, there are some vegetarian snakes. African egg-eating snakes have no teeth, and survive purely on bird eggs.

What Do Snakes Eat?

There are over 3,000 species of snakes in the world. Some live in deserts, some in rainforests, others in the ocean. Some serpents can grow over 20 feet long, whereas many never exceed the size of an earthworm.

But despite a vast array of biological differences, all snakes have one thing in common. They are all obligate carnivores, meaning they subsist on a diet of 100% animal products. Snakes can’t eat vegetables or plants at all.

Because different species of snakes live in different environments, their specific diets can vary. Wild snakes may eat any or all of the following as part of their normal diet:

Most snakes kill their prey through constriction (squeezing the animal to death). Other snakes have fangs, and subdue their prey using venom. Some small snakes, that hunt insects and frogs, don’t kill their prey at all – they swallow it alive.

What Do You Feed a Pet Snake?

Almost every pet snake will thrive on a diet of whole mice or rats. Rodents provide 100% of a snake’s nutritional requirements. You can’t feed snakes on vegetables or fruits, as they can’t digest plants.

While some snakes may eat chunks of meat (e.g. chicken), it can’t sustain them for long. Snakes need to eat whole animals, including bones, skin, and internal organs. Otherwise, they won’t get all of the vitamins and minerals that they need to thrive.

If you’re new to snakes, you might squeamish at the idea of feeding whole mice and rats to your pet. But, if you want a pet snake, it’s necessary.

Fortunately, you don’t have to feed your snake live animals. Most snakes will eat pre-killed rodents. You can buy them frozen, and thaw them out before feeding them to your snake.

Out of thousands of species, you might assume that at least one type of snake might eat plants. But so far, scientists have not yet discovered any herbivorous snakes. There aren’t even any omnivorous snakes (snakes that eat plants alongside meat).

There have been some cases of snakes eating plants in the wild. However, when this happens, it’s an accident. For example, a plant may get caught on a prey animal and inadvertently swallowed by the snake.

The American Institute of Biological Sciences reported one case of a cottonmouth (water moccasin) eating seaweed. But this was not deliberate: the seaweed smelled like fish, so it triggered a feeding response. The snake wasn’t able to digest the plant matter, and it was found intact in its droppings.

So, there are no snakes that eat plants. However, there are some snakes that feed exclusively on eggs. If you classify eggs as vegetarian-friendly, then egg-eating snakes could be considered vegetarians.

The reason that humans can survive on a vegetarian or vegan diet is because we’re omnivores. Our bodies can digest both plant matter and animal matter with ease. We can extract nutrients, such as fat, protein, and vitamins, from both sources of food.

But snakes aren’t the same. Snakes have evolved for thousands of years to feed exclusively on animals. Like lions and crocodiles, snakes are obligate carnivores: they need to eat meat to survive. There are many reasons why you can’t feed a snake vegetables or fruits:

You could probably get a snake to eat a vegetable if you made it smell like an animal. But doing so would be extremely dangerous. A snake would starve to death if it didn’t have animals to eat.

How a Snake’s Digestive System Works

To understand why snakes can’t survive on plants, we have to examine a snake’s digestive system. Herbivores, omnivores, and carnivores all have very different ways of chewing, processing, and digesting food.

Herbivores, such as cows, have flat teeth. These allow the animal to grind its food, which helps to break down tough plant matter. After swallowing, the food passes through the stomach into a long tube of intestines.

Vegetables and leaves are full of fiber, which is difficult to digest. To successfully extract nutrition from plants, an herbivore or omnivore must have a huge range of gut bacteria. According to Comprehensive Physiology, these microorganisms are essential for fermenting and breaking down plants into usable nutrients.

A snake’s body, however, has none of the above features. Snakes have small, hooked teeth designed for gripping prey. They can’t chew or grind their food, and must swallow it whole. They have short intestinal tracts, and none of the gut microbes needed for digesting plants.

Snakes have no way of extracting what they need from fruits and vegetables. If a snake swallowed a leaf, even accidentally, it would pass through its digestive system almost completely undisturbed.

Snakes’ bodies are designed to eat dense, high-calorie prey animals. After swallowing a meal, a snake won’t get the urge to eat again for 1-4 weeks (or longer, depending on the snake’s size). Plants are relatively low-calorie compared to animals. If a snake could only eat plants, it would die of malnutrition.

It’s understandable if you don’t like the idea of feeding a whole mouse or rat to your snake. Many people are squeamish when handling dead animals. Although you can offer live rodents if you prefer, many people would consider it cruel to live-feed.

Fortunately, not all snakes need to eat rodents. Most people only feed mice and rats to their snake because it’s the easiest option. Rodents provide all of the macronutrients, vitamins and minerals that snakes need. They’re high in fat and calories, and their bones provide more than enough calcium.

There are many types of snakes that you don’t have to feed mice. Some species can live on insects, fish, or eggs. Legless lizards (not technically snakes, but similar) can even eat dog food.

Most types of snakes start off eating insects, arthropods, and other bugs when they’re young. This is because insects are small enough for even the tiniest hatchling to swallow whole. But once the snake grows up, it will abandon invertebrates and focus its diet on mammals or birds.

However, some snakes are small enough that they can continue to eat insects throughout their life. Some examples include:

Unfortunately, insectivorous snakes are notoriously difficult to keep as pets. Many of them refuse to eat in captivity, and subsequently die. It can also be difficult to find a steady and reliable source of food for them to eat.

Many snakes eat bird eggs and reptile eggs as part of their natural diet. However, most snakes that eat eggs also need to eat rodents or other animals. Eggs don’t provide adequate nutrition on their own.

However, there are two notable exceptions to this rule. Indian and African egg-eating snakes live on a diet consisting solely of bird eggs. Their digestive systems have evolved specifically to rely on eggs as their only food source. They swallow the egg whole, then crush it and regurgitate the shell.

There are advantages to owning an African egg-eating snake. You only need to feed them bird eggs, so you never have to deal with dead animals. And because they have no teeth, you’re not in danger of being bitten.

Unfortunately, it can be difficult to feed these picky snakes, especially when they’re young. Egg-eating snakes rarely grow big enough to handle chicken eggs. You’ll have to find a source of small eggs, such as finch eggs or button quail eggs.

There are many species of snake that hunt and eat fish in the wild. These are called piscivores. Sea snakes, for example, feed exclusively on fish and fish eggs. However, you wouldn’t want to keep one as a pet, as they’re highly venomous.

There are also many harmless snakes that eat fish. One example is the common garter snake, that is native to most U.S. states. Garter snakes frequently spend time near lakes and ponds, catching and eating small fish. They also enjoy small mammals, and invertebrates such as worms.

You can feed pet garter snakes small fish, such as guppies, as well as pieces of larger fish. They do benefit from eating the occasional pinky mouse. If you don’t offer rodents, you must dust their food regularly with calcium powder.

You should avoid feeding a garter snake fish that contains thiaminase. This is an enzyme that breaks down thiamin (vitamin B1). A diet of thiaminase-rich fish can cause garter snakes to become B1 deficient. For more information on feeding garter snakes, see our garter snake care guide.

Legless lizards look extremely similar to snakes. They have long, smooth, scaly bodies and no limbs. If you saw one, you would probably think it was a snake. But there are some crucial differences:

Legless lizards can and do chew their food, so they don’t need to eat whole rodents. Different species have different nutritional requirements. The sheltopusik, one of the largest legless lizards, can sometimes be found in the pet trade.

In the wild, sheltopusiks eat slugs, snails and small mammals. In captivity, they can be fed crickets, mealworms, eggs, pieces of meat, and even canned dog food. Sheltopusiks can live for up to 50 years in captivity, so adopting one is not a decision to be taken lightly.

Can Vegans Have Pet Snakes?

No matter what species of snake you choose, they all need to eat animal products. If you’re a vegan or vegetarian that wants a pet snake, this might create a moral dilemma.

On the one hand, snakes must eat animal products to survive. It’s their natural diet, and you can’t change evolution. But you might still believe it’s wrong to buy rodents, insects, or eggs to feed to your snake. If this is the case, you may wonder if it’s ethically acceptable to keep a snake at all.

Many vegans and vegetarians choose not to buy carnivorous pets, including snakes, from pet stores or breeders. However, you may find it acceptable to adopt a snake from a shelter, or from someone who can no longer keep it. That way, you’re saving an unwanted animal, and not creating demand for people to continue breeding them.

But if you aren’t comfortable with feeding dead animals to a pet, you shouldn’t get a snake. Instead, you might consider adopting an animal that doesn’t need to eat meat. Rabbits, for example, are natural herbivores. There are even some vegan-friendly reptiles that survive entirely on plants.

Which Reptiles Are Vegetarian?

Most reptiles in the world, including snakes, are carnivorous. If they aren’t carnivores, then they’re omnivores, surviving on a mixture of both plants and meat. Reptiles are usually opportunistic eaters, feeding on whatever they can find. However, there are a few species of reptiles that feed exclusively on plant matter. For example:

Most vegetarian reptiles will need their food to be dusted with calcium occasionally. Like all reptiles, herbivorous reptiles have strict care requirements, and shouldn’t be adopted on a whim.