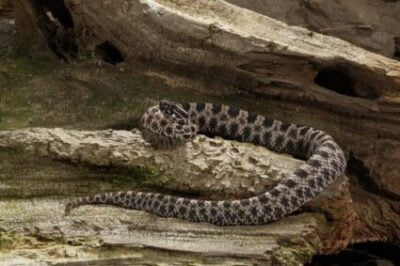 Florida is home to 50 species of snake. That’s due to the diverse range of habitats. Throughout Florida, you have grasslands, forests, marshes and swamps, ponds, lakes, rivers—basically any habitat that would be an ideal home for a snake. That’s why so many species can thrive.

These snakes are highly venomous and pose a genuine danger to humans. Each one of them, apart from the coral snake, is a type of pit viper. These are the snakes that you have to watch out for.

What Are The Most Dangerous Snakes in Florida?

These deadly snakes live in every corner of the state, from the Panhandle to Miami and the Everglades. No matter where you go, there’s a chance that you’ll encounter one.

Their gray-brown diamond pattern runs all the way along their back. The eastern diamondback rattlesnake is America’s most deadly snake.

Their venom is potent, even more so than other rattlesnakes. Not only that, but they store more venom in their venom glands than most other snakes.

If you’re bitten by one, the first thing you’ll notice is searing pain, like being jabbed with two hot needles. This searing pain quickly moves through your body, leaving your whole body in agony.

Their venom causes your tissue to die, your blood to stop clotting, and can cause cardiac arrest. The only saving grace is that they’re not as aggressive as their reputation makes them out to be.

The timber rattlesnake isn’t quite as deadly as the eastern diamondback, but they still have a venomous bite.

They can be easily distinguished from a Diamondback because their pattern runs in horizontal stripes rather than diamond shapes. They’re quite high contrast, too, with a gray-brown background and dark black stripes.

Just like the eastern diamondback, they have a high venom yield, meaning that they have a lot stored up ready to use. They have long fangs.

Their venom stops your nervous system from working, making it hard to breathe, and eventually stopping your heart altogether. Because of their wide range, around a dozen probable timber rattlesnake deaths have been recorded since the turn of the century.

These snakes are much smaller than timber and diamondbacks. While an eastern diamondback can reach 6 feet, pygmy rattlesnakes can only grow to 2 feet.

Aside from their length, you can recognize them by their dark brown spots, which run all along their top and their sides, against a gray-brown background.

While their venom is potent, they don’t have a lot of it. An eastern diamondback rattlesnake has a huge venom yield of up to 1000mg, with an average of 450mg or so. A pygmy rattlesnake only has reserves of 18mg.

Specifically, their venom is designed to stop your blood from clotting. Now, on a small scale, this would normally only be a problem if you were bleeding and couldn’t stop.

But according to Poison Center Tampa, the real problem with this kind of snake venom is internal bleeding. This is what could kill you, although there are no pygmy rattlesnake deaths on record.

The eastern coral snake is the one with red, black and yellow stripes. They look like kingsnakes, except:

It’s the origin of the old rhyme, “Red next to black, safe from attack; red next to yellow, you’re a dead fellow.” There are plenty of variants, but the point is always the same.

Coral snake venom is exceptionally dangerous—although the snakes themselves are very placid. Coral snakes are quite small and short, only reaching 30 inches at most.

Not only that, but they don’t have the long and dangerous fangs that rattlesnakes and other pit vipers do. The fangs are positioned at the front of the mouth, just like rattlesnakes, but they’re significantly shorter (at a quarter of an inch long). They’re quite docile snakes, hardly ever biting people, and only rarely using venom when they do.

But if they do decide to bite, they use a neurotoxin. This attacks your nervous system, stopping your lungs and heart from working.

The copperhead is named after its bright rusty-red head. This and their low-contrast, dusty brown color makes camouflage easy for them.

They also don’t have a rattle, although they’ll still rattle their tail, as if they’re pretending. This is a behavior they learned that’s termed ‘Batesian mimicry,’ which means that they’re copying an even scarier predator to make other animals scared of them.

Copperheads are an ambush predator that usually avoids humans. Unlike many other snakes, it freezes if disturbed. This is a problem both for the snake and the person that finds them because it makes it more likely that they’ll get scared and bite you.

If you approach one, you might not realize that you’re frightening it. Although they are venomous, they’re the least venomous of all pit vipers, and their bite stands little chance of causing serious health problems.

Copperheads have the most limited range in Florida. They’re only really found in the panhandle, while each of the other species lives all across the state. They are happiest in mixed woodlands and deciduous forests, although they can live in low-lying swampy areas too (like the panhandle).

Cottonmouths are one of the best-known of America’s most venomous snakes.

Cottonmouths are a kind of pit viper. Just like the copperhead, they get their name from their defensive display.

When the cottonmouth is threatened, they’ll open their mouth, exposing their bright white gums. You might also know them as the water moccasin, which is a name they earn from preferring to live close to the water.

The cottonmouth is slightly more venomous than the copperhead. Their bite and venom are toxic enough to occasionally kill, provided that the person can’t get to the hospital on time.

Cottonmouth venom kills the tissue around the bite mark, leaving swelling and may necessitate amputation if things get too bad. Either way, like all pit viper venom, their bites cause intense pain.

Where Do Venomous Snakes Live?

Florida is a diverse state with a unique ecosystem. In large part, that’s why so many snake species have managed to thrive there. Do bear in mind that the vast majority of snakes you find in Florida are non-venomous.

As we’ve said, there are at least 50 species, and only 6 of those are venomous. The rest don’t want to do anything but eat rodents and similar prey—they certainly don’t want anything to do with people.

The panhandle is home to all of the state’s copperheads. While the snake enjoys a variety of habitats, and can be found anywhere from Texas to Nebraska, and all the way east to Massachusetts, they only live in the very northwest of Florida.

But that doesn’t mean they’re the only dangerous snake there. The timber rattlesnake lives towards the east of the panhandle, at the tip of its southern range. This is the only part of Florida where you’re likely to find one. It’s unclear exactly why since there are forested areas throughout Florida, not just in the north/northwest.

Dusky pygmy rattlesnakes, cottonmouths, eastern coral snakes, and eastern diamondbacks are found all across the state, including in the panhandle. What with there being a huge range of different habitats in and around the panhandle, from swamps and bayous to pine forests, this is the ‘worst’ part of Florida when it comes to snakes. That’s because rattlesnakes that enjoy forests are happy here, as are cottonmouths that enjoy being near water.

There are invasive species in the Everglades, including invasive snakes, that are damaging the local ecosystem. Besides them, there are four venomous snakes you’re likely to find in the Everglades: the cottonmouth, the western diamondback, the coral snake, and the dusky pygmy rattlesnake.

Cottonmouths are especially happy there due to the number of water sources. They can only live near significant bodies of water, so the more water, the more cottonmouth snakes that you’ll find there.

Diamondbacks are also comfortable swimmers, so they’re at home in this area. Pygmy rattlesnakes prefer swamps and marshes, so again, the Everglades is an ideal place for them to live.

Central Florida is home to far more non-venomous snakes than venomous ones. In the urban areas around Tampa, Orlando, and Lakeland, you can find many completely harmless snakes:

These non-venomous snakes thrive in and around urban areas, where there tend to be lots of rodents. Of the venomous snakes in Florida, you’re most likely to see water moccasins.

While eastern diamondbacks are found across the whole state, they prefer wide-open areas to anywhere that’s built up. You’re more likely to see pygmy rattlesnakes. Coral rattlesnakes are only rarely seen.

Being a built-up area, you won’t see any snakes in Miami proper. In suburbs and parks around the city, you might come across the odd non-venomous snake. The most common is the black racer, which isn’t venomous.

These are the snakes you’re most likely to see, both because they’re most active during the day. The same applies to ringneck snakes and bimini blind snakes, which you can find in gardens and yards.

Near water (i.e. ponds, rivers, and streams) you’re likely to see water snakes. Water moccasins aren’t the only aquatic snake in Florida. The Florida banded water snake, for example, is common near bodies of water and is entirely harmless.

Southwest Florida, from Sarasota down to Fort Myers and Naples, takes in a number of state parks and preserves. You can find all the usual non-venomous snakes like black racers, but the area is also home to all the usual venomous suspects too:

Aside from the native species, you’re also likely to come across some Burmese pythons too. According to NBC, while they originally only populated the Everglades, they have since expanded their range north towards urban areas in southwest Florida.

They can now be found all across Collier County, and even in Lee County (Fort Myers and Cape Coral). It’s unclear where the edge of their range will eventually be.

Areas with No Snakes in Florida

Unfortunately, if you want to guarantee a snake-free life, then Florida isn’t the place for you. Head on out to any suburb, and you’ll encounter snakes regularly. They also love to take up residence in parks, golf courses, or anywhere else that might be a little marshy or have a water source nearby.