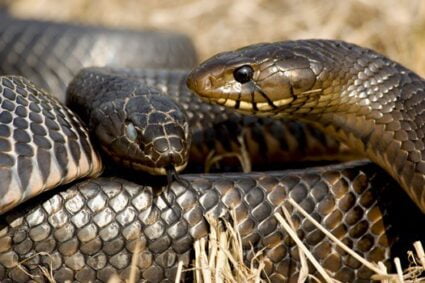 Spurs are a unique part of a snake’s anatomy. Not all snakes have spurs, only ones that have remained unchanged for millions of years. The spurs on snakes are a ‘vestigial remnant.’

Spurs are tiny claw-like structures on either side of a snake’s cloaca. They are remnants of when snakes used to have legs, and are connected to small bones. They are used for mating and fighting.

Some people mistakenly think that spurs are a build-up of unshed skin and nothing more. Although snakes no longer use their spurs for walking, they do still perform several valuable functions.

What Are Snake Spurs?

Cloacal spurs are a unique part of a snake’s anatomy. They sit on either side of the cloaca. They are like small spikes or claws poking out from under the snake’s scales.

The outside of the spur is solid like a horn or claw. It is usually a dark brown color. You can get your thumb underneath it and move it around.

But there’s more to a snake’s spurs than meets the eye. The small claw-like appendage on the outside is only part of the structure of the spur. The rest is inside the snake’s body, and consists of a femur and a pelvis, which connects the two spurs together.

This pelvis isn’t connected to the snake’s spine. But they can still be moved around, to an extent, by the snake.

Why Do Snakes Have Spurs?

A snake’s spurs are a ‘vestigial remnant.’ This is a way of describing a part of an animal’s anatomy that has no clear current use. They are a remnant, a leftover from a body part or organ that the animal used to need in its evolutionary history.

Snake spurs are a vestigial remnant of legs. Scientists can tell that they used to be legs because:

If you were to dissect a snake, you can see the bones the outer spurs are attached to, and they actually do like femurs and a pelvis.

The question remains why snakes still have spurs, even if they can’t be used as legs. Most people would think that since the snake doesn’t need them, that evolutionary advancement would have eventually gotten rid of them.

How Do Snakes Use Spurs?

Despite not appearing very useful, snakes do still use their spurs. They serve two separates purposes:

Use of Snake Spurs During Mating

According to Copeia, the most crucial use of spurs is during mating. Mating is a complex ritual for snakes, involving many typical behaviors which are repeated across different snake species.

The male will find his way to a female. He will begin sniffing the air by rapidly flicking his tongue in her direction. If there are no other males around, he will approach her and start the next parts of the ‘ritual.’

He will continue to approach the female, getting closer. When close enough, the male will put his head on her body and slide on top of her. He will stop moving before he gets to her head. When his whole body is on top, he will make use of his spurs. The male will be writhing from side to side.

After a while, he’ll start moving his spurs up and down, rather than from side to side. He may do this quite hard. It encourages the female to lift up her tail. He will then wrap his tail around hers for a cloacal kiss, which is where the pair finally get to mate.

Use of Snake Spurs During Combat

During the breeding season, many males will head towards a female that’s in heat. It’s then that they’ll fight, to ‘win’ the right to mate with her.

According to Herpetologica, species of boa use their spurs during these fights. The males will entwine their tails, as well as the lower halves of their bodies. They will keep their heads separated, probably to prevent damage.

They will then tug and pull at each other, trying to pin each other down. During this ‘fight,’ each male will use its spurs. They make their spurs stick out more than usual so to scratch or puncture the enemy’s scales.

Whichever male is pinned, loses. The winner may get the chance to mate, unless another challenger decides to fight him.

This hasn’t been observed in every snake that has spurs. The research in Herpetologica only refers to the Madagascan boa. However, other species are very likely to use their spurs for the same purpose.

Female snakes don’t need spurs. Spurs are found in the same place as a male’s spurs. The only differences are that they’re shorter and less curved.

Can Spurs Be Used to Sex a Snake?

Some claim that you can sex a snake by looking at its spurs. However, spur length, thickness, and curvature are all highly variable. One male could have long straight spurs, and another could have short hooked spurs.

Which Snakes Have Spurs?

As discussed, spurs are a remnant from earlier in the snake’s evolutionary history. It stands to reason that the more recently a snake evolved, the less likely it is to have spurs. This is exactly what you find.

Does a Boa Constrictor Have Spurs?

According to Science Daily, boas are an ancient species. They have remained unchanged for millions of years. Because they evolved relatively early in the history of snakes, they have a small pelvis unconnected to their spine as well as spurs.

Boids appeared in the Cretaceous period, around 70 million years ago. This was the point at which boas and pythons last shared a common ancestor.

The Cretaceous marked the first appearance of any snakes. Most of the fossils from the period show animals that are elongated like snakes, but they still have very short legs. It’s these creatures that boids, and then boa constrictors, evolved from.

Does a Ball Python Have Spurs?

Like boas, pythons evolved early relative to many other families of snakes. This means that they, too, have small spurs that used to be legs.

However, they are the same biological structure in both snakes. The main difference is that ball python spurs have changed more over the years than boa constrictor spurs.

Does a Corn Snake Have Spurs?

Corn snakes don’t have spurs. That’s because the snake family that corns belong to, the Colubrids, evolved later than boas and pythons. During their evolution, they gradually got rid of their spurs.

If you were to dissect a corn snake, you would also find internal differences. Corn snakes don’t have the pelvis or femurs that a python or boa does. Over time, the corn snake got rid of these parts as they had no need for them.