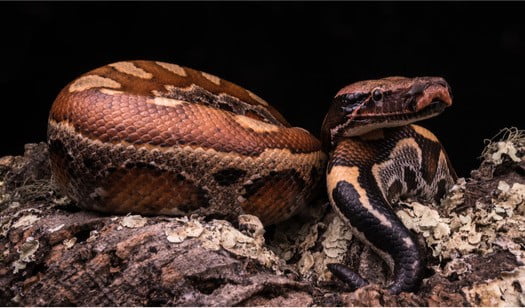 Blood pythons are bigger around the middle, for their size, compared to almost any other species of snake of their length. Even healthy specimens tend to look very overweight. These snakes eat infrequently compared to other types of snakes, but are usually voracious feeders.

Blood pythons feed on mammals and birds. You can provide this diet with pre-killed mice and rats. They have a reputation as picky eaters, but this is because early captive specimens were wild-caught.

You just need to be patient when feeding a blood python. That starts with knowing what blood pythons eat and how often to feed your pet snake.

What to Feed Blood Pythons

In the wild, blood pythons live near the edges of jungles and forests, and favor streams and rivers. This enables them to find a wide range of prey. This includes rodents on the ground, and birds and eggs in the trees.

They are constrictor snakes, so they wrap themselves around their prey to squeeze it. This stops the prey’s heart, which prevents them from struggling and makes them easier to eat. Blood pythons don’t have or use venom.

Mammals and birds provide all the nutritional content that these snakes need. Start off a hatchling blood python with small rodents, i.e. pinkies and fuzzies. As they grow larger, you can feed them adult mice.

How Often Do Blood Pythons Eat?

Despite being larger around the middle than other species, blood pythons don’t need to eat more frequently. They feed infrequently in the wild, but this is offset by the fact that they eat large meals each time.

They have a slow metabolism compared to other snakes, so you have to be careful when feeding them. This is in part because they don’t move very much. They are ambush predators, which means they wait for prey to come to their way.

They don’t move when they’re hungry, and all snake species stay quite still when they digest their food. This is why you should feed your blood python once every two weeks.

Which Rodents to Feed a Blood Python

With juveniles, start by feeding them pinkies and fuzzies. These are the smallest rodents. You can buy them frozen, and allow them to thaw before feeding. However, wild-caught snakes often won’t eat pre-killed food.

As an adult, a blood python will enjoy large portions fed infrequently. You should move them on to rats as soon as they are capable of eating them. You could either feed large rats infrequently, or medium rats more frequently.

While they are big around the middle, blood pythons aren’t big enough to eat larger prey. Don’t feed blood pythons chickens or rabbits, for example.

The food you feed your snake should be enough that it leaves a noticeable lump in its belly. And snakes can eat food that’s bigger than their head.

If your snake can’t eat larger portions, feed it the equivalent in weight, but in smaller portions.

If your blood python is wild-caught, it won’t want to eat pre-killed food. Snakes eat by reflex, and certain things trigger their feeding reflex. They are attracted to movement and the warmth in food.

It is possible to simulate live prey with dead prey. Take the prey and allow it to warm to room temperature. Waggle it around in front of the snake’s nose using tongs. This may trick them into thinking that it’s live.

You may want to consider feeding live food to your snake, but it has its drawbacks:

But if it’s the only way to get your snake to eat, then that’s what you’ll have to do. Alternatively, you could try braining the food.

How to Feed a Blood Python

Allow the prey to warm to room temperature. It should be completely thawed before feeding. Don’t microwave the prey.

You should feed a blood python with tongs. Hold the prey item in front of the snake’s face. If they don’t strike, jiggle it from side to side.

Once the snake is used to eating frozen and thawed prey, this should no longer be necessary. You can put the prey in the blood python’s enclosure, and the snake will eat it sooner or later.

If you feed live prey, leave it in the enclosure for a small amount of time. If the snake doesn’t eat it, take the prey out of the enclosure. Leaving it in there would allow it to harm your snake, e.g. by biting its face and eyes.

If your blood python still isn’t eating, try them with live prey. If they don’t take it, then you will have to try different snake feeding techniques. Force-feeding is possible, but the last resort.

Try braining the food. When the snake sniffs the food with its tongue, it may trigger its feeding reflex.

If this doesn’t work, check that the snake’s environment is up to standard. Feeding problems are caused by environmental issues, such as:

Confirm that there are no health issues through observation. If none are apparent, then take your pet snake to see a veterinarian.

How to Force Feed a Blood Python

Force-feeding is a stressful process for a snake. But if your blood python refuses to eat, it has to be done. Follow this process:

However, this is a last-resort strategy. You may break its teeth, and you teach the snake not to like you. The underlying issue stopping your blood python from feeding needs to be identified and corrected.

While adult blood pythons eat every 2 weeks, they defecate infrequently. It’s not uncommon for blood pythons to go to the toilet every 4-6 weeks. You need to know what to do if you have a constipated blood python.