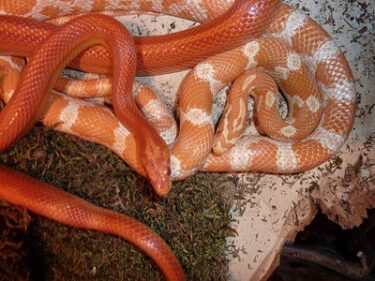 Corn snakes (Pantherophis guttatus) are constrictors that capture and asphyxiate their prey. Snakes are carnivorous and need a diet of meat to grow and thrive. So, you can’t feed your snake a vegetarian diet. Your pet corn snake’s meal plan should be the same in captivity as it is in the wild.

Wild and captive corn snakes largely eat rodents. Mice and rats contain all the nutrients, vitamins, and minerals that colubrids need to grow and thrive. Feed baby and adult corns pre-killed rodents based on their size. Don’t feed a snake live prey due to the risk of injury and parasites.

Corns don’t have, or require, a varied diet. They don’t need to eat different foods to get a range of nutrients, or to maintain their interest in food. You just need to know how often you should feed a corn snake, how much food is required, and the corn snake food alternatives that should be avoided.

What Can You Feed Corn Snakes?

The corn snake is a member of the rat snake family (colubrids). Rat snakes eat rodents ranging in size from baby mice to large rats. Corn snakes were found by farmers who noticed them near fields of grain, which is where lots of rodents choose to live.

This means that you should also feed your corn snake rodents because that’s their preferred food in the wild. Some captive corns can also be fed baby chicks and small eggs. The easiest and most common way to achieve this is by feeding corn snakes pinkies.

To avoid getting bitten by a corn snake, you should never feed a corn snake by hand. Always use a pair of feeding tongs.

What Are Pinkies for Corn Snakes?

Pinkies are baby mice that are killed to feed to pet snakes. They are mass-produced, killed, and flash-frozen. You can buy them in large bulk bags from suppliers and store them away in your freezer.

Pinkies must be defrosted and warmed up before being fed to a corn snake. You can do this by placing a pinkie in warm/hot (not boiling) water for 5 minutes.

There are different kinds of mice that you can feed to corn snakes, ranging from pinkie/smaller to hopper/bigger. The type that you feed to your corn snake depends on its current age and size (see table below).

If you don’t like the idea of feeding your corn snake pinkies, or think that you will find the experience uncomfortable, then you shouldn’t get a pet corn snake. They need this type of food, and will become ill without it.

Should You Give Corn Snakes Whole Prey?

Snakes are known for eating their prey without chewing it. So, you may think that it’s safer for the snake that you feed it prey in parts, rather than as a whole. The idea is to avoid the risk of your snake choking.

However, feeding a corn snake whole prey is safe. Your corn won’t choke or struggle to breathe because of a unique adaptation that all snakes have.

Snakes have a windpipe (glottis) and a separate esophagus for food. But the snake can poke the end of its windpipe out the side of its mouth. This means that it can breathe while it eats prey, so there’s no risk of choking.

Snakes also have a strong digestive system that can dissolve bones. This is how a corn snake gets most of its calcium. Any bones that aren’t fully digested can be passed or regurgitated.

You can feed your corn smaller portions more regularly, or several small pinkies at once. As long as your snake gets enough food, there’s no problem.

Can You Feed a Corn Snake Live Rodents?

Pinkies are already dead when you feed them to a snake. A snake’s feeding reflex is partly triggered by signs of the prey being alive, like warmth. This means that you may struggle at first to get your snake to eat pinkies, hence the reason we say that you should warm up a pinkie first.

That’s why some owners choose to feed a corn snake live prey. This approach has its advantages and disadvantages but, on balance, feeding pre-killed prey is the better option. Here are the pros and cons:

The main issue is potential injury to your corn snake. Rodents have strong and sharp teeth, and when attacked, they will bite your snake.

According to the journal Nature, certain snake species do eat eggs. Some eat nothing but eggs, such as the African egg-eating snake.

Wild corn snakes will occasionally feed on birds and small birds’ eggs, but not exclusively. These offer high levels of protein and calcium, both of which snakes need in abundance to remain healthy.

Whole chicken eggs are too big, while your snake will not recognize the others as food. You could feed your corn snake small eggs, like quail eggs, if you can find a reliable source.

Some species of snakes eat fish, such as ribbon snakes and garter snakes. Fish provide a lot of the nutrients that snakes need, like lots of protein, some fat, and some carbohydrate, plus vitamins and minerals.

However, fish aren’t part of a corn snake’s natural diet. They get all the nutrition they need from eating mice and rats. The small differences between fish and their normal food may mean that your snake misses out on key nutrients.

Another issue with fish is that your corn snake may not recognize it as food. Your corn snake will only eat things that trigger its feeding reflex. This reflex is instinctual, and related to the corn snake’s regular prey (rodents).

Some snakes eat insects, like ants and centipedes, but not corn snakes. Corns don’t recognize insects as a food source.

Some snake species eat amphibians. Juvenile corn snakes will occasionally eat toads and frogs, although nowhere near as much as they’ll eat rodents. However, that doesn’t mean you should feed amphibians to corn snakes.

Wild-caught amphibians may have parasites which can harm your snake’s health Also, amphibians aren’t bred for food and can’t be easily sourced

A snake cannot digest, and won’t recognize, fruits or veg as a food source. A snake’s digestive system, from its teeth to its gut, isn’t set up to do so.

According to National Geographic, snakes eat nothing but meat/other animals.

Corn snakes shouldn’t be fed the same foods as humans. Snakes require more protein, and get calcium from the bones of their prey.

Another issue with human food is that much of it is processed. It may contain empty calories, saturated fat, and other harmful ingredients.

Processed meats smell and taste different compared to raw meat, which is what corn snakes eat. It will likely contain additives and preservatives.

Do Baby and Adult Corns Eat the Same Food?

Babies eat the same food as adults. Both will mainly eat rodents. The only difference is that baby corn snakes won’t eat as much food in one sitting.

In captivity, juveniles must eat pinkies. Pinkies are the smallest rodents that are commercially available to feed pet snakes.

You must feed a juvenile corn snake pinkies because larger rodents won’t fit in its mouth. As the snake grows older, you can feed it larger rodents like fuzzies, hoppers, weanlings, or adult mice.

Here’s some advice on when to start feeding baby corn snakes.

How Much Should I Feed My Corn Snake?

In relation to the level of food consumption, the size of the corn snake is more significant than its age, according to JSTOR.

The bigger the snake, the more food you will need to feed it. Here is a guide to how much to feed a corn snake based on its weight:

Why Is My Corn Snake Refusing to Eat?

A corn snake may refuse to eat its food for the following reasons:

It’ll take your corn snake about 24-48 hours to digest its meal in optimal conditions. Just monitor your snake’s weight to make sure it isn’t overly thin or too fat, and continue feeding your corn snake when it’s hungry.

1 thought on “What Do Corn Snakes Eat?”