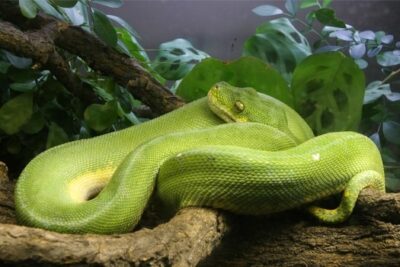 Green tree pythons (Morelia viridis) are arboreal snakes that are native to Australia and Papua New Guinea. A snake will live most of its life in the trees, rarely exploring the ground. This means that it will also hunt in the trees, although its prey items are not limited to arboreal animals.

The green tree python is an obligate ambush predator. It will eat small mammals, rodents, frogs, and other amphibians, birds, and other small reptiles. This snake will lure prey close by wiggling the delicate tip of its tail, mimicking a worm. It will then strike and constrict its prey. Captive green tree pythons will be fed a diet of rodents.

The green tree python is known for how drastically it changes color as it grows and matures. Babies are born hot-rod red or banana yellow. As the snake grows from hatchling, to juvenile, to adult, it will transition to a vivid emerald green. Also, its diet also changes considerably as it grows larger.

The green tree python is a nocturnal snake of the Pythonidae family. It is native to Papua New Guinea and parts of Australia. This is an arboreal species, meaning that it lives primarily in the trees.

Another unique trait of the green tree python is how it perches on a branch. A snake will coil over a branch in a saddle-like manner, with its head nestled in the center. A snake will spend the majority of its life in the trees.

However, many of the animals often preyed upon by this snake are not arboreal in nature. A green tree python’s diet in the wild consists of:

Like many animals, a green tree python will experience an ontogenetic shift as it ages. This means that how the snake behaves, in response to multiple factors, changes over the course of its life.

Ontogeny is not isolated to green tree pythons either. The Biological Journal of the Linnean Society notes that many studies have found cases where juveniles of a species frequently differ in prey selection. In snakes, prey selection often depends on the size of the animal.

Green tree pythons are arboreal. Many pythons are capable of swimming, and some will submerge themselves in the water while waiting to ambush prey. This behavior has not been seen in wild or captive green tree pythons. Nor has the hunting or eating of fish been observed.

There are several snake species that practice cannibalism, even if it isn’t a true ophiophagus snake. That is an animal that has evolved to hunt and devour snakes. It appears that the green tree python does not fall into either of these categories.

Constricting snakes will usually eat whatever they can overpower and recognize as prey. The only limit to what a snake can eat is its gape size. Meaning how far it can expand its jaw before risking injury.

Baby green pythons are fully self-sufficient once they hatch. Still, they are quite small. On average, green tree python hatchlings are 12 inches long. A hatchling will prey largely upon small lizards and amphibians.

The Journal of Herpetology found that juvenile green tree pythons preyed exclusively on small lizards. This prey preference is explained as a means of limiting intra-species food competition.

How Do Green Tree Pythons Hunt?

According to Foraging Ecology and Diet of An Ambush Predator: The Green Python, the green tree python is an obligate ambush predator. This means that it will only attack highly active prey.

A green tree python is non-venomous and subdues its prey with constriction. It will use trickery to draw the prey animal close. The green tree python has an unusually long, thin tail compared to other snakes. The tip of this tail will also be lighter or darker in color than the rest of the snake. A green tree python will use its tail as a lure. What it will do is wiggle its tail to mimic the undulations of a worm.

Unaware prey will be drawn in by this movement. Once it is close enough, the snake strikes. It will latch on and coil around its prey. Death often occurs in a matter of minutes.

Although green tree pythons are largely arboreal, the snakes have been known to hunt semi-terrestrially as well by using its heat-sensing pits and acute eyesight. In this case, a snake will wrap itself around the base of a tree and face downwards. It will then wait for a suitable prey animal to wander too close.

Green tree pythons have an average of 100 sharp, curved teeth. As these teeth are for gripping prey, they are solid and curve towards the back of the throat. These teeth sit in multiple rows along the top and bottom jaw.

How Do Green Tree Pythons Eat?

Green tree pythons eat by swallowing their prey whole. Once the prey is dead, the snake will seek out the head of its victim. It will then stretch its jaws and begin swallowing its prey.

Their jaws are connected by extremely flexible ligaments. These ligaments stretch and allow a snake to swallow prey larger than its head. A snake can also move the left and right mandibles on its upper jaw independently. It will move its head from side to side while using its teeth to pull the prey into its mouth, inch by inch. This action is nicknamed “walking”.

A green tree python will swallow its food by walking the prey down into its throat. Once the prey is deep enough, the throat will use muscular contractions to move the food into the stomach. Watch a snake eating closely and you will see their jaws moving to accommodate this movement.

In the wild, the green tree python will eat small mammals, rodents, birds, lizards, and amphibians. Captive snakes will survive on a rodent-based diet. This is a complete diet for this snake.