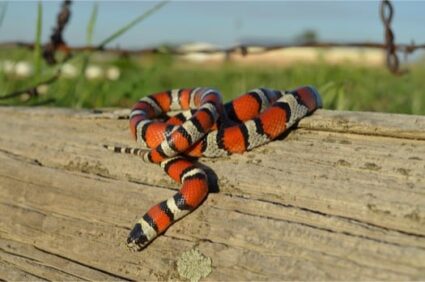 The milk snake, Lampropeltis triangulum, is a common constrictor snake found throughout the United States, Canada, and Mexico. It is a species of kingsnake that’s known for its beautiful colors.

Let’s look more closely at the dietary habits of a milk snake, and if what they eat is different in the wild compared to captivity.

What Is a Milk Snake’s Diet?

According to Animal Diversity Web, milk snakes are carnivores. This means that they eat other animals, specifically terrestrial vertebrates.

What Milk Snakes Eat in The Wild

Milk snakes are most often found near the edges of forests with deciduous or coniferous trees. They can also be found in prairies, savannahs, near streams or marshes, and in some agricultural or suburban areas.

You will often find milk snakes near barns on farms, where small rodents are plentiful. Their native habitat informs their diet. Prey of the wild milk snake includes the following:

The age of the snake is also a factor in a wild milk snake’s diet, since it is a less able predator when it is smaller. A milk snake hatchling’s food includes the following:

Milk snakes of all ages will also eat frogs, fish, or eggs.

How Does A Milk Snake Hunt Its Prey?

While most snakes are ambush predators, milk snakes are more active hunters. They seek out their prey, following scent trails and often striking its prey several times with its small bite. These snakes usually hunt during the night, as nocturnal animals do.

A milk snake is a powerful constrictor. The snake will capture its prey and squeeze the smaller animal in its coils until it is rapidly incapacitated. They hold the prey in a tight grip which stops the flow of blood to the prey animal’s heart. Then the milk snake swallows its prey whole.

What Milk Snakes Eat in Captivity

Milk snakes are popular pet snakes. They are easy to care for and have a gentle nature. If you have a pet milk snake, you do not need to go out of your way to find birds or lizards for your snake to eat. There are other foods that a milk snake will happily consume.

According to Litteratura Serpentium, milk snakes feed well in captivity on a diet of adult mice and young rats. Frozen small rodents are readily available at local pet stores and can be ordered in bulk.

How Often Should You Feed Your Milk Snake?

For adult milk snakes, make sure you choose a prey animal that is no larger around than the thickest part of your milk snake’s body. Milk snakes digest their food slowly, and too big a meal at once can give them indigestion and cause them to regurgitate their food.

After your milk snake eats, you should be able to see a slight but noticeable lump in the snake’s body. Milk snakes can sometimes be picky eaters, especially if it is time for them to shed their skin. If you are concerned about your milk snake not eating enough, take your snake to a reptile veterinarian to make sure it is healthy.

Should You Feed Your Milk Snake Live Prey?

Pre-killed rodents are easy to get your hands on. Suppliers sell frozen rodents in bulk and for much cheaper prices than they sell live rats or mice. While you certainly don’t want to spare any expense in taking care of your snake, you also need to watch your finances.

After that, it is safer for your snake to be provided with a frozen rodent than a live one. Prey animals do not like to go down quietly, and a live rat or mouse may attempt to bite your snake in order to defend itself.

In the wild, a milk snake can slither away from the prey which is being difficult to eat. The snake can also avoid prey in the wild if it is not hungry. In captivity, however, the snake has no means to escape its vivarium. Rodent bites can lead to harmful, painful infections for your snake.

While milk snakes are often picky eaters in captivity, they can be easily trained to eat a thawed frozen rodent. Use a pair of tongs to wiggle the rodent around the vivarium. The movement of the prey will stimulate the milk snake’s feeding response and encourage it to strike the mouse even though it is not alive. After a few feedings, your milk snake will be used to receiving its meals in this way.

How To Avoid Getting Bitten While Feeding a Milk Snake

Milk snakes are rarely known to bite humans. However, if your snake is new to your home and nervous around humans, it may perceive you as a threat and decide to bite. Here are some tips to avoid getting bitten.

Give Your Snake Time To Acclimate

Your snake needs time to get used to its new surroundings before you try to feed it. When you get the snake, ask how long ago it was fed so you know how long you can afford to wait before feeding it.

To avoid an early nervous nip, use gloves the first few times you handle your snake. Move slowly to avoid startling the snake.

Difference Between Mealtime and Playtime

Snakes can’t learn tricks, but they can be taught the difference between feeding time and handling time. You can accomplish this by transferring your snake to a different enclosure when it is time for a meal.

You can use tongs or a gloved hand to transfer the snake from one container to another. Always feed your snake in this separate container, rather than the place where it spends the rest of the day.

Avoid Linking Your Hand With Food

Snakes learn by association. If the only time you put your hand near your snake is to feed it, it may come to associate the appearance of a hand with the arrival of food. So, when you reach for your snake, it may get excited and preemptively strike at your fingers.

When feeding your snake, use tongs to present it with food. This way the snake will expect the food to come from tongs, and not from your fingers.

MLA Style: Carter, Lou. "What Do Milk Snakes Eat in Captivity and the Wild? (with Video)" Snakes For Pets, (December 16, 2020), https://www.snakesforpets.com/what-do-milk-snakes-eat/.