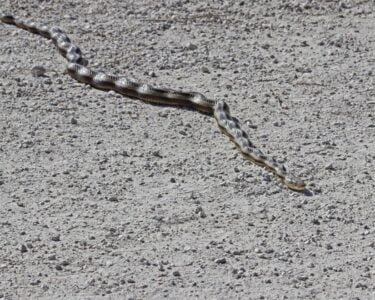 You can feel a series of hard bumps on your snake’s spine. Not surprisingly, you’re concerned that pet snakes with kinked backs have a painful, degenerative condition that will make mobility more difficult. But some snake enthusiasts claim that ‘kinking’ can improve with age.

Kinking is where a snake’s back ‘kinks’ at odd angles to one side. It ranges in seriousness from a slight bend at one point in their back, to severe kinks one after the other, like a zig-zag. In the worst cases, the snake will be unable to digest its food. There is no cure for snakes with a kinked spine.

Just because there isn’t a cure for kinking doesn’t mean that your snake can’t live a good life. Certain kinds of kinking don’t affect snakes all that much, like kinking at the end of the tail. Severe cases will require euthanasia because the snake would suffer, before dying, due to the problem.

What Is Kinking in Snakes?

Kinking is a health condition where the snake’s spine is bent at odd angles. If you’re familiar with the human condition of scoliosis, kinking is quite similar to that. The snake will be born with these odd bends in its spine, which will become more pronounced and evident as it ages.

Unfortunately, there is no cure. However, it isn’t necessarily something you have to worry about. If the snake only has one small kink at the end of its tail, it won’t affect it. The snake will be able to move, eat, and live as it would normally.

What Causes Kinks in Snakes?

Kinking can happen to any snake. It’s partly a genetic issue. This is backed up by the fact that it occurs more often in certain morphs than others.

Caramel ball python offspring have a higher rate of kinking than regular ball pythons, for example. This suggests that kinking is caused by a genetic abnormality, although it hasn’t yet been properly identified.

That being said, environmental factors affecting either the mother or the eggs can make kinking more likely or severe.

Some breeders think that vitamin and mineral deficiencies, for instance in calcium or vitamin D, can make kinking more likely. This hasn’t yet been backed up by scientific research, though.

What has been backed up by research is the fact that environmental conditions (humidity and temperature) after the egg is laid, but before they hatch, can significantly affect the snake inside.

In particular, temperature fluctuations during incubation or gestation affect the snake in some way. It’s unclear whether temperature changes exacerbate a genetic issue, or whether they cause kinking all by themselves.

What to Do with a Kinked Snake

What you do depends on the severity of the kinking. If your snake has a very slight angle in their back, that’s fine.

The same goes if the snake has a kink between its cloaca and the tip of its tail. Its health and quality of life won’t be affected by these issues.

However, if your snake hatches and it has significant kinking all along its back, you may have to euthanize the snake.

Should You Euthanize Kinked Snakes?

A small kink between a snake’s cloaca and the tip of its tail isn’t going to affect the snake too severely. Snakes with kinked necks will find it difficult to digest, or even move. There’s a case to be made for euthanizing these snakes. Not only that, but snakes with kinked posture can pass on the gene to their offspring without it being expressed.

As for whether they should be euthanized, that’s another question entirely. Some breeders euthanize any kinked snake as a matter of course. Of course, if the snake is obviously in pain or discomfort, it would be more humane to put them out of their misery.

How to Prevent Kinking in Snakes

It’s vital that you do all you can to raise happy, healthy snakes. The easiest way to prevent kinking in the future is not to breed kinked snakes. Caramel corns have very high rates of kinking, should not be bred.

We’ve established that the conditions that the eggs live in can lead to kinking. To make sure that your snake’s eggs are at the right temperature, use an incubator. An incubator can maintain the exact, correct temperature for the two months or so between the female laying the eggs, and the eggs hatching. The exact requirements of the eggs depend on the species.

Set the incubator to the correct temperature, wait for it to reach that temperature, and then put the eggs inside. The eggs should be inside an egg box along with some absorbent material, like vermiculite or perlite.

Spray the inside of the box thoroughly, place the eggs inside, cover the box, and incubate the eggs. For more detailed instructions, see our guide on how to incubate snake eggs at home.

MLA Style: Carter, Lou. "What Is Kinking in Snakes? (Twisted Back, Neck or Tail)" Snakes For Pets, (December 15, 2020), https://www.snakesforpets.com/what-is-kinking-in-snakes/.