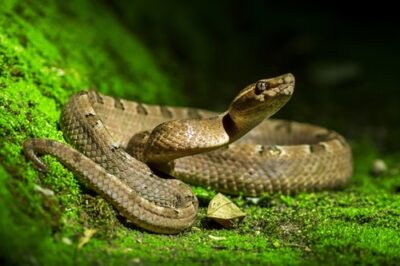 The natural world is in turmoil. Climate change and human expansion have threatened species across the globe. Many snake species are declining in number, or are even almost extinct.

If snakes became extinct, the prey population that snakes feed on would grow, and the predators that feed on snakes may die out. These effects would ripple through the ecosystem and cause considerable damage. Also, some people rely on the economic value of snakes so they would lose their jobs.

Threats to snakes mean that these scenarios are not unlikely. They won’t affect every snake species because there are around 3,600. But hundreds of species are threatened, endangered, or declining.

An endangered species is one that has few specimens left in the wild. A species can be critically endangered when there are hardly any snakes left, or just vulnerable where there are still some snakes left but fewer than there were.

The threat level against individual species is monitored and defined by the International Union for the Conservation of Nature (IUCN). They maintain ‘the Red List,’ which is a list of all the animals facing extinction threats. The IUCN has nine different levels of population that they designate:

The list moves from the least worrying to the most worrying designations. There are several snakes listed as recently extinct on the IUCN Red List. There are many more listed as endangered or vulnerable. However, while threats to the natural world continue, most snake species are fine.

Why Are Snakes Endangered?

The main reason why species are endangered is human encroachment on their habitat. We all affect snakes and other endangered species by:

This is a sad story that affects many animals, not only snakes. Aside from the direct effects we have, there are indirect effects. Our continued damage to the climate will put more species in danger.

Snakes are cold-blooded. They rely on the warmth of the sun rather than internal heat. They can both overheat in too much sun, or freeze when it’s too cold. Climate change will make it much more difficult for snakes to regulate their temperature.

Which Snake Species are Endangered?

According to the IUCN, many snake species are endangered. They list both snakes that are well known, and those that aren’t so familiar. Their list includes (among others):

These are only four examples of more than a hundred on the IUCN Red List. Examples hail from Asia, the Americas, Europe, and Africa. Most are species that you’ve never heard of.

But not all species will have been found by scientists. Snakes love to live in rainforests, for example, where there are still thousands of undiscovered species. These species could go extinct, but we would never know.

There are snakes listed as extinct on the IUCN Red List. There are many more that aren’t yet extinct, but have decreasing numbers. They will likely go extinct in the near future.

One example is the Round Island Burrowing Boa. It was unique to an island north of Mauritius (Round Island), and nowhere else in the world. The last sighting of the snake was in the 1970s.

Other animals the IUCN aren’t so sure about. The Agalta Mountain forest snake is listed as critically endangered with a note that they’re possibly extinct. The Saint Croix racer was previously listed as extinct, but some specimens have been found since.

The reason for these discrepancies is twofold. Many snake species live in places that are difficult to access, e.g. mountain ranges or remote islands. They aren’t checked on frequently.

Also, it’s exceptionally difficult to find a specimen of a species if there are hardly any in existence. It’s like searching for a needle in a haystack. Even worse, snakes love to stay hidden, motionless, or camouflaged.

This makes a biologist’s job difficult. They can set up movement tracking cameras, hike through the snake’s habitat, and consult with local guides. But even then, it would still be tough to find a snake that wants to stay hidden.

What Would Happen If Snakes Went Extinct?

If all snakes were to go extinct suddenly, much of the natural world would be thrown into turmoil. Snakes are both predator and prey, so many other species would be affected.

This would be magnified because snakes are so widespread. Snakes are one of the most successful animal forms currently in existence. They are found on every continent except for Antarctica, and span a huge North-South range.

If they were to go extinct, then, much of the world’s habitats would be affected. Snakes live in the following areas:

If all snake species went extinct, each of these ecosystems would change irrevocably. The main way in which they would change would be in the population levels of other species: some growing more than they otherwise would, and others also going extinct.

Why Are Snakes Important to the Ecosystem?

Snakes are critical to the ecosystem because every animal is vital to the ecosystem. In every area, there is a delicate balance of life. Plants sustain herbivorous animals, and predators eat prey. If you change one part of the ecosystem, the rest has to change too.

While the idea of a ladder-like food chain is inaccurate, a food ‘web’ does exist. This is like lots of food chains all mashed together. When one animal is lost from the food web, others are affected. And besides that, the habitat itself will change too.

The most immediate effect of snakes going extinct would be that their prey gets out of control. Common prey species for snakes include:

In the absence of a key predator, the numbers of their prey species would increase. The population of mice, for example, would balloon in places where corn snakes used to feed on them.

You might think that because these species are small, then the effect of their population growth would be small too. But that’s not so. Each species is a key part of its ecosystem no matter their size.

For example, if the numbers of one particular prey amphibian increased, you might think this is good. But it may not be. The extra competition may affect other non-prey amphibians and make them go extinct.

Also, snakes aren’t the only animal that eats these prey species. Other predators do too. With more prey, the number of predators may increase. This may be inconvenient for nearby human settlements, and the numbers of other prey species.

This is what people mean when they refer to a ‘circle of life.’ One small change can precipitate many more.

If their food source isn’t abundant, larger predators will struggle to survive. Some species, especially certain birds of prey, almost exclusively eat snakes. These species would be especially affected and could become extinct too.

This might be surprising. After all, there are lots of other prey animals they could potentially eat. However, most animals aren’t like us. Humans are omnivores. We can eat almost anything.

A predator can’t pick and choose what it eats. They may be drawn by instinct to only one kind of food. Or, their stomach and gut may be capable of eating other prey items. So, when their ‘food’ goes extinct, they can’t pick anything else.

A separate effect of these predators’ struggles would be that they may migrate. When prey is scarce in a certain area, predators that are smart enough will move on.

This would cause all sorts of problems. For a start, prey animals in another area would now be under enormous pressure. Their numbers may start to decline too as a new predator is added to their food web.

In turn, the predators that usually ate these prey items would go into decline too. There would be less food for them to eat. This could lead to big, well-known, and well-loved animals going extinct.

Migration would also affect people. Predator species could cross or enter suburban/urban areas where they would encounter people. This would be bad for both the people and the predator species.

Predators’ Other Prey Would Be Affected

Also, while some predators almost exclusively eat snakes, others don’t. They eat other prey too.

Depending on the kind of prey, and the available amount, this could present two different issues. The predator may come to rely on another type of prey. If they do, increased pressure would decline their numbers and that prey could go extinct too.

Alternatively, the numbers of the prey species could go up. As there are fewer and fewer predators around, there is less chance the prey will be eaten. Both of these effects have been observed in nature.

As you can imagine, these changes continue to ripple through the ecosystem. Even one tiny change can have significant consequences.

Can We Live Without Snakes?

It’s not only their habitat that snakes’ extinction would affect. No more snakes would affect people, too, in several ways.

Snakes live in a variety of ecosystems, which broadens the possibility of change. They live both in the countryside and suburban areas, which between them cover most of the land. Anywhere that humans live, apart from inner cities and coldest places, there are snakes.

The most obvious change is that a lack of snakes would mean lots more rodents. Do you find one or two snakes a year in your yard? If there were none, then you would be finding lots of mice and rats instead.

But there are deeper changes that would occur. An absence of snakes would have real effects on people around the world.

Snakes have historically been seen as an enemy. People can be so easily frightened of them. But in reality, they’re a useful ally, especially in agricultural areas.

For us, rodents are irritating or perhaps frightening, depending on your disposition. But for a farmer, they’re a bad sign. Rodents are pests, in the actual sense of the word. They eat and destroy crops.

Corn snakes are a good example. They likely got their name because they are found near grain or corn stores. That’s because there are lots of rodents for them to feed on there. A farmer would much rather find a corn snake than a rodent.

In response, farmers would have to take alternative forms of action to prevent crop and store damage. This would be expensive and time-consuming.

For American farmers, this wouldn’t be much of a problem. But in the rest of the world, especially poorer areas, snakes are a free and effective pest control method.

Besides helping farmers with rodents, snakes are also a natural resource in themselves. People capture and use snakes:

You may agree or disagree with some of these commercial uses of snakes. But be that as it may, people across the world base their livelihood on snakes. That isn’t going to change any time soon, unless the snakes do go extinct.

If they did, perhaps tens of thousands of people would be out of a job. This is even worse when you consider that most people who rely on snakes for their ‘produce’ are from third world countries.

But even if a species going extinct doesn’t affect us, that doesn’t mean we should let it. The planet’s biodiversity is, as far as we know, unique. People of every faith, and non-believers, have a responsibility to protect it.